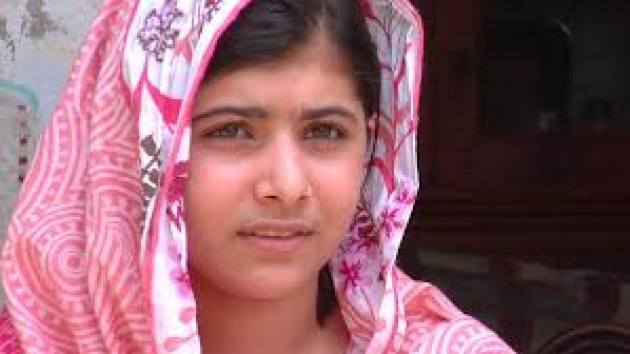 "My people need me."

Malala Yousufzai, the schoolgirl who was shot by the Talibans on October 9th just because she was trying to get an education, has been able to stand up, take small steps and communicate. She is not able to speak, because she has a tracheotomy tube inserted through her throat to protect her airway swollen after she was attacked. Nonetheless, she has been able to write and seems to recover steadily. She is starting to remembers the events that took place before she was shot, and today her sight and hearing will be tested. The doctors in the British hospital she is being treated say that she hasn't suffered from major brain damage, but they are also being very cautious, because the road to her full recovery is still long. More surgeries will be needed soon to repair her skull and jaw, and a long rehabilitation program will need to be implemented as well. But she is alive, and that's what matters the most.

Despite huge demonstrations being organized in her support all over the world, the Talibans have vowed to continue to persecute her, which poses a serious question about whether she will be able to go back to the Swat District, her native land in Pakistan. The Pakistani government has sworn full protection for the young civil rights activist, but it remains unclear how effective it can be against the deadly sporadic attacks of the radical group. The Pakistani police announced that six arrests have been made in connection with the shooting, among whom were the mother, brother and fiancé of Atta Ullah Khan, a 23-year-old man from the same district where Malala was shot. At the moment, he seems to be the main suspect. It's not known yet whether Khan was the shooter or the master planner of the attack.

Last night some members of Malala's family were able to fly to the UK to visit her. It was wonderful moment of reunion, especially because her family wasn't able to remain with her after she was flown from Islamabad - the Pakistani capital - to the hospital in Birmingham where she is currently recovering. Her father, mother and two brothers were finally able to see with their own eyes the conditions of their relative. "She is not just my daughter, she is the daughter of everyone, she is the sister of everyone," her father said. In an interview, he showed his appreciation for the help her daughter is receiving, and extended his gratitude to everybody around the world who showed their support for his daughter and spoke out against the terrorists.

Malala's attack and succeeding reaction around the world are raising some serious questions. It has been brought up that Malala is becoming a global celebrity whose image has been used and owned by other people to fulfill their own agenda. Let's not forget that this girl is just 14, and as a child she should be allowed to make her own journey from the innocence of childhood to the awareness of adulthood in the appropriate developmental time. By putting her on the frontline in the war against the Taliban injustices, there is the risk to accelerate her maturation process and increase even more the risks of a subsequent attack. Maybe the choice of her family - and the media - to allow her to speak out so openly (and dangerously) against the policies of the radical group exposed her image too much to the anger and desire of retaliation of the Taliban movement, a situation in which a girl at such young age shouldn't be put. Children are children, and despite the undeniably wonderful inspiration that this story has created around the world - especially for all Pakistani and Afghan women - it's still a question whether or not this is too much to bear for such a young girl.