The past few days I've been in the studio editing the audio for this piece. As I mentioned in my previous post, I recorded some children singing the folk song on which my film is based, but I decided to mix it up a bit with a few more recordings. So that's in process.
Meanwhile, I've been looking into the paint-on-glass technique. I've played around with this in the past, and I suppose the last water film included some paint-on-glass, but I've never done 'real' paint-on-glass, which is where the paint is quite thick, or at least not as watery as watercolors or inks.
I also got an idea to use my multiplane to create a dramatic depth of field. I've done this is the past as well, of course, but the layers were never really that far apart, so the background layer was never really that out of focus. But I thought it might be fun to try for this project. So here is my stand set up with a paint background and some marker faces quickly sketched onto the top layer: 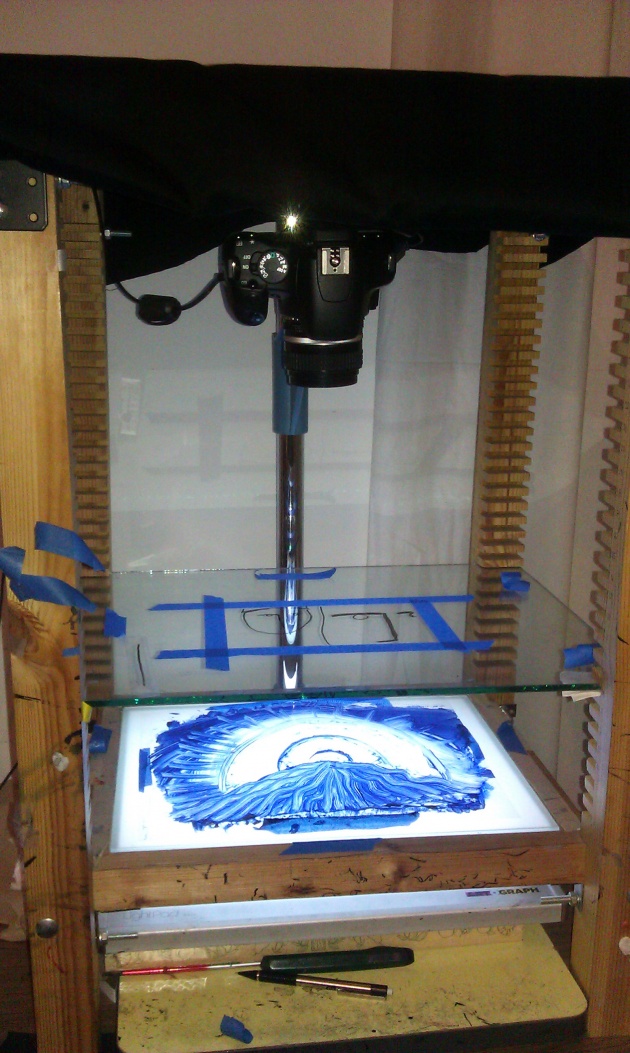 This is what it looks like through the camera:

You can see the background is really out of focus, and I like that. This particular background (which was just a test I had lying around from the water film) is a little more complicated than what I'm picturing for Mario. I'm thinking more textured, but even color backgrounds. We'll see.
Also, it may be interesting to note that this is the maximum depth of field my set u can create. If I were to move my camera any further away from the glass, it starts to catch the wooden edges of the stand. And you'll notice this set up leaves me with quite a small working area on the top layer - about 6.5x4 inches. Luckily, I like working small. Perhaps with a different lens I could manage to get a bigger depth of field or a bigger work area, but it's not necessary for this project.
Next I'll start doing some paint tests!