"I have definitely noticed a difference with the new implementation of the buzzscore. Now I can see where all aspects of my filmmaking and social media are making a difference and it also gives me an incentive to try and promote my work more." - Mark Kuczewski

Mark Kuczewski is one of the most active filmmakers on Film Annex and is currently in the top 3 on Eren's Picks thanks to his high BuzzScore. He regularly uploads new videos and writes blogs. He actively shares his content on his social media networks and is influential online as other people share his work as well.

Mark has a personal website which directly links to his Web TV. He also regularly shares his films, blogs and Web TV URL on his personal Facebook, Twitter, and LinkedIn. He set up a Facebook page and a second Twitter account dedicated to his Web TV as a portfolio for his work, two more sources of traffic which increase his revenues. 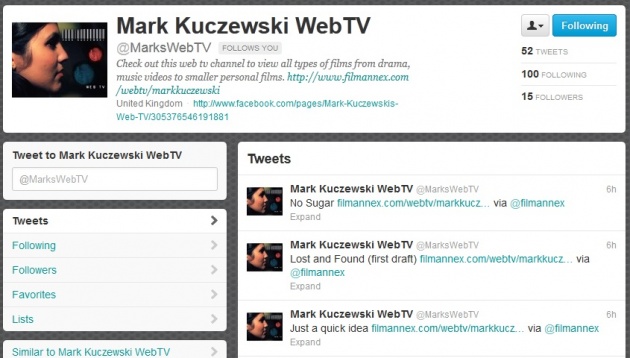 Below is a short interview with Mark about how he uses social media to promote his work and how it has affected his revenues on Film Annex. He also gives a few tips on social media film promotion.

Film Annex: When did you start promoting your work specifically on social media platforms?
Mark Kuczewski:
I must have started promoting my work on social media around 5 years ago. It started with uploading to Vimeo basic edits of my films that I would then send out via email or Facebook to get feedback on the film.

FA: What social media platforms do you use? Which one(s) do you think is(are) more efficient for filmmakers to use to promote their work and why?
MK: I use Facebook mainly because pretty much everyone has Facebook these days. You can even make pages specifically for your films which is great. I could take out an add to try and reach more people. Twitter is another one that I use to get my work out there. It's far more basic but I think sometimes Twitter is more about reaching people with a similar interest rather than people you know.

FA: Did you make interesting contacts or create business opportunities by sharing your work on social media?
MK: I have made a lot of interesting contacts via social media. I have had people contact me for advice on making films and just general questions. These are contacts that I could work with in the future and I think filmmaking really benefits from this because it is about team work and helping each other out.

FA: Give us an example on how you promote your Web TV or work in general on social media?
MK: I promote my Web TV via a page on Facebook that I created specifically for it. I took out an advert that then helped to build up a number of people that would be interested in my work. This was great because now rather than just sending out my work via my Facebook and reaching my contacts, I have the opportunity to send it out via my Web TV Facebook page and reach even more people who have liked the page because they are interested in the content. 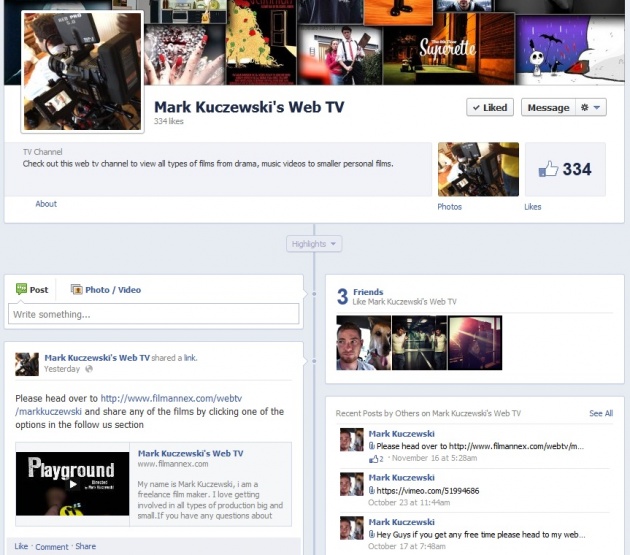 FA: Did you see a change on your revenues on Film Annex after promoting your Web TV on social media?
MK: I didn't see too much of a change when I first started promoting my work but I have definitely noticed a difference with the new implementation of the buzzscore. Now I can see where all aspects of my filmmaking and social media are making a difference and it also gives me an incentive to try and promote my work more.

FA: Do you have any tips for other filmmakers on how to promote their films on social media?
MK: I would say to get all of your work out there by any means. We don't make films or videos for people not to watch. Post your films wherever you think they will get views. If you shoot on a specific type of camera, then once the film is done, post a link in a camera forum so they can see how it looks. This could apply to lens or sound equipment or anything. Also, make Facebook pages for your films to get people interested before they are finished. Ask other people to share your work if they like it. This way, it can reach more than just your contacts and go further.