New Yorkers to the vast majority of the planet outside the five boroughs have a certain reputation - not all of it um... complimentary. Yet one thing about us is that even though we will fight among ourselves over anything; Mets or Yankees, who makes the best pizza, what neighborhood you're from, what high school you went to, taxicabs, cutting lines and on and on.  Outsiders though beware, the one thing you do not do is call New Yorkers out as a group. Then you have 8 million united and pissed of "New Yorkers" who are not your friend and that is a big problem to have.

Usually you have to be born here or have relocated here for a good amount of time to be considered a "New Yorker."  Then there are special cases, usually a public figure, an athlete or celebrity who has made a major and lasting impact on the city and who has in some way made the city their own. Right now we have one particular New Yorker in mind. One who galvanized the city one magical year the way not many have done before or done since, Mark Messier.

Mark Messier came to New York and immediately took the burden of 54 years of hockey futility on his broad shoulders and delivered. He delivered on the ice and he delivered off it. He was a fixture in the city and the city embraced him with open arms, not only for the dynamic leadership and remarkable skill with which he dominated on the ice, but for the way he became part of the New York community and the way he eagerly made every effort to give back to that community.

#InTheLab has had the opportunity to cross paths with Mark at several charity events, most recently at one for an organization of which he is a Board Member, the New York Police and Fire Widows' and Childrens' Benefit Fund. The Organization was founded by former New York Met Rusty Staub in 1985 and since that time has distributed over $100,000,000. to aid families of NYC Police, Firefighters, EMS workers and other First Responders who made the ultimate sacrifice serving the city of New York.

Mark served as one of the Honorary Chairs at the Second Annual Kick Off to Summer Benefit which raised over $125,000 for the fund. Arthur Kade was able to spend a moment with the legend to talk about his involvement with the charity and of course with the Rangers taking to the Garden Ice today in pursuit of their first Stanley Cup since Mark hoisted it over his head in 1994, they talked a little hockey as well!

Please share a moment with us and listen in as we get some insight from a great New Yorker sharing his thoughts on giving back to his community. That's right - We said New Yorker! Any of youse got a problem wit dat? 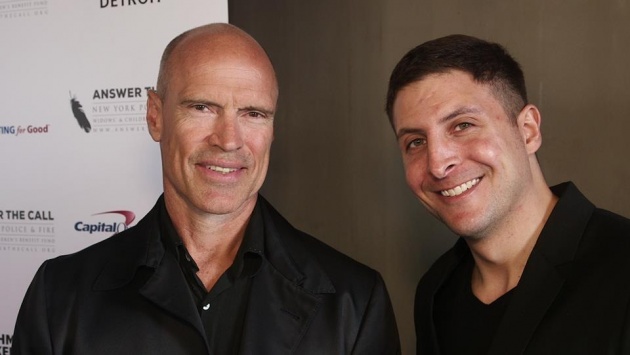