Researchers working on the US space agency's Maven satellite have reported their first big set of results in a clutch of scholarly papers.

These detail how Martian air today is being removed at high altitudes through its interactions with the Sun.

They calculate the rates at which gases escape, and suggest why these rates may have been even higher in the past.

"We're well on the way to answering many of our questions; much further along actually than I thought we would be at this stage," said Bruce Jakosky, the principal investigator on Nasa's Maven spacecraft.

"What we're reporting today is data from just the first 6-7 months from our primary mission.

"We're still analysing this data, and we have already been approved for a mission extension that will allow us to round out one full Martian year and to see the response of the system to all the seasons on Mars," he told BBC News.

All the observations by previous satellites and landers at the Red Planet indicate that it was once shrouded in a thick blanket of gases, which supported the presence of liquid water at its surface.

This is evident in the many landscape features that resemble the remains of river channels, deltas and lakes.

But the air pressure on Mars today is less than 1% of what it is on Earth, meaning any free water would instantly boil away or freeze solid.

Some of the air has probably reacted with, and been incorporated into, minerals at the surface.

However, the most likely explanation for the atmosphere's loss - and the one that Maven began testing last year - is that the Sun has simply stripped it away, turning Mars from a warm and wet world into a cold and dry one. 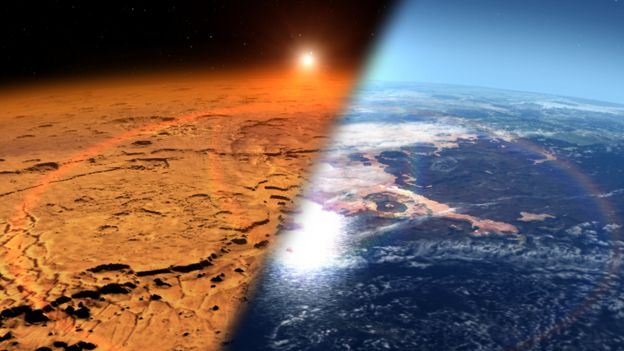 The satellite has been making a series of deep dives into the atmosphere as it orbits the planet.

These dips take it to under 200km from the surface - enabling it to sample the gases that are present and to record how they are behaving when excited by our star.

The Sun emits a constant stream of charged particles called the solar wind. This wind carries magnetic fields and when these hit the planet they generate electric fields that are then able to accelerate atmospheric ions, hurling them either directly off into space or slamming them into other atmospheric constituents so that they are removed.

The loss rates may appear on the face of it to be quite small, but they are significant when applied over the 4.5 billion years of Mars' history.

"I can't help but imagine hamburgers flying out of the Martian atmosphere - one per second. But fortunately it's instead oxygen and carbon dioxide that are leaving the planet which are important both for water and for the climate of the planet overall."

The Maven team also got to observe the impact of a coronal mass ejection at Mars in March this year.

A CME is a huge bubble of excited gas that occasionally billows away from the Sun. A CME will move faster than the solar wind and carry even more energy.

When this bubble struck the atmosphere, Maven saw escape rates spike 10 to 20 times higher, at least.

"Solar storms were more common and more intense earlier in Solar System history, so long ago we expect escape to have been happening all the time and stripping away lots of atmosphere from the planet," said Dr Halekas.

"This implies that not only is Mars' atmosphere escaping today and has been escaping over time, but much of that atmosphere may have been lost early on."

Had Mars retained a global magnetic field, it might have been able to deflect and resist this persistent, abrasive assault from our star.

Scientists think however that the internal dynamo generating such a field probably collapsed just a few hundred million years after the planet formed.

Thankfully for Earth, its global magnetic field continues to operate and afford protection. Otherwise, our climate system could have been altered in a very similar way.