I find science interesting ever since in grade school. I like experiments when I was in secondary school and feel like a scientist when in the chemistry laboratory. Although I was really not too interested with dissecting frogs, I still found it informative specially when we saw the frog's heart pumping while its body was almost skinless. In college, everything seemed to be confusing. I had a biology class where the instructor was not really aiming to give us a full knowledge about the subject but instead, had only aimed to end the semester. I don't know how I passed the said subject but I am pretty sure that I didn't learn anything at all.

I am just glad that after college, I was still interested in certain sides of science. One of the Philippine local tv programs which really had given me that feeling towards science and environment is the educational show of ABS-CBN called "Matanglawin".

Matanglawin literally means Hawk's Eye. Lawin is a Tagalog term for Hawk while Mata is Eye so that made up its name. The show was named as such because of the fact that it becomes a medium for people of any age to be aware and be informed of nature which is represented by the Lawin or the hawk.

This show is being aired weekly every Sundays at 10 in the morning. This program showcases interesting and fun discoveries in nature, several natural and environmental phenomena. The show takes its audiences on adventures to natural and supernatural worlds to learn about wildlife, science concepts, culture, practical and general knowledge and basically everything under the sun.

Aside from the show being informative, one more reason why the audience are really into it is because its host, Kim Atienza. Let's learn more about the host.

Alejandro Ilagan Atienza or better known as Kim Atienza or popularly known as Kuya Kim is a Filipino Weatherman, TV Host, Actor,Voice Actor and known as the son of the former Mayor of Manila, Lito Atienza. He loves to join marathons and he loves cycling.

The image above was taken when he joined the Subic triathlon. A triathlon is a multidiscipline endurance race that challenges participants to complete a course where they must swim, bike and run, all in the same day. 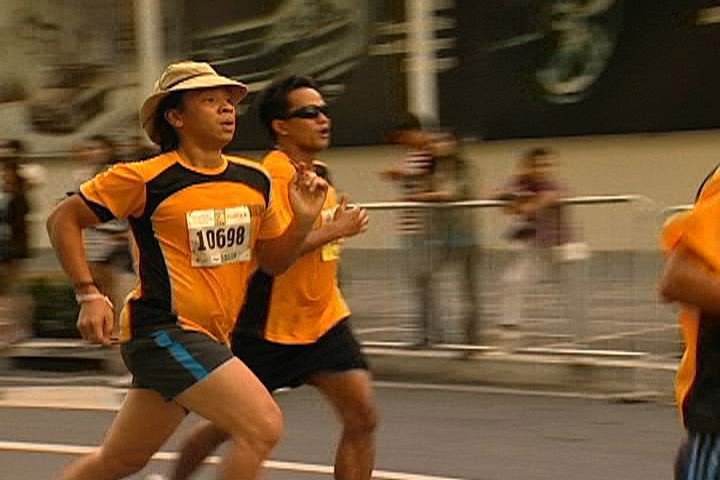 Here's another one where he joins a marathon.

Here he totes his pet snake to the audience.

But the main reason why he fits to the job is because he has been a passionate animal lover ever since he was a child. In fact, he has several queer animals as pets. Kuya Kim mastered almost all the information about any pet or animal including facts for natural science. He is also known to be health conscious. He taught aerobics and weightlifting on television before he even went to sports casting.

Below shows his house which looks like a zoo because of his love to exotic plants and exotic animals. He and his wife loves to explore and collect.

He also has wild reptiles, crocodiles. He also have 24 dogs, Matamata Turtles, African Bull frog, the second biggest frog, he has a lots of snakes. One of his favorites are the ball pythons, the tamest snake of the world.

In the video below, he asks viewers to return his lost parrot pet:
The best thing about him hosting is his own enthusiasm in delivering the information which would definitely make his viewers learn from him.
His main goal is to be credible as a news person but at the same time to entertain.

He has also hosted the famous noontime show "It's Showtime" and has been fond of sharing knowledge or trivia before saying his spills. It's quite entertaining watching him provide that information in a fast but clear way. Because of that, he has been known as the Philippine's Trivia King.

Here are some of the images of his expeditions and exploration as a host of the said show: 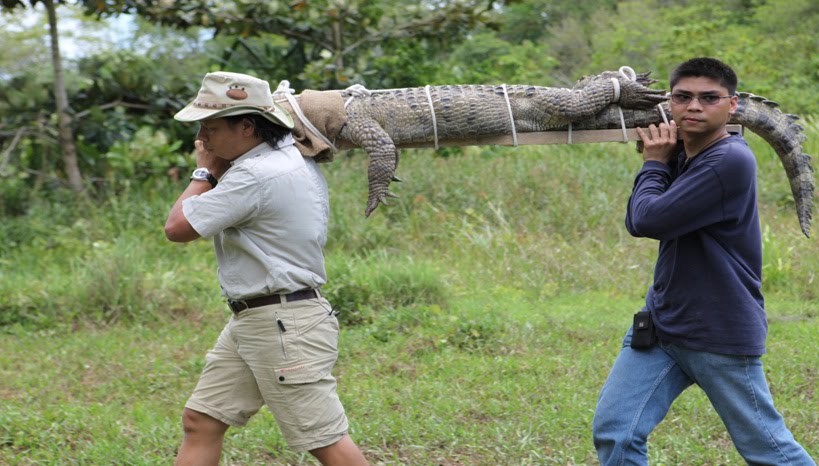 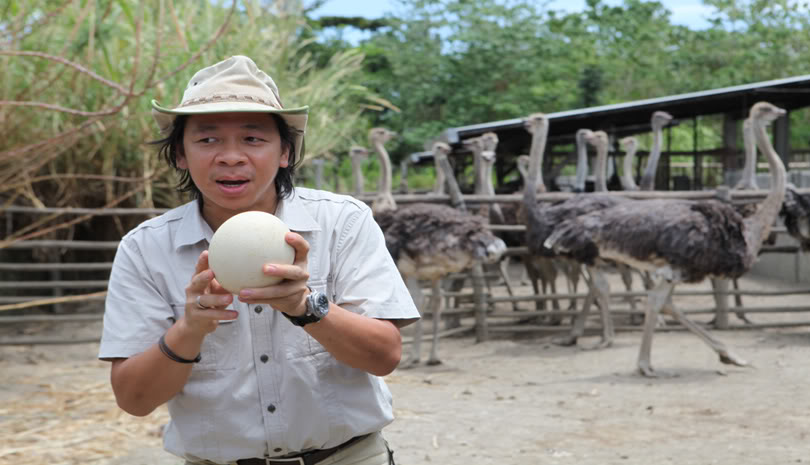 He is always wearing this get up in his show. Here's one where he had taken one of the ostrich's eggs. 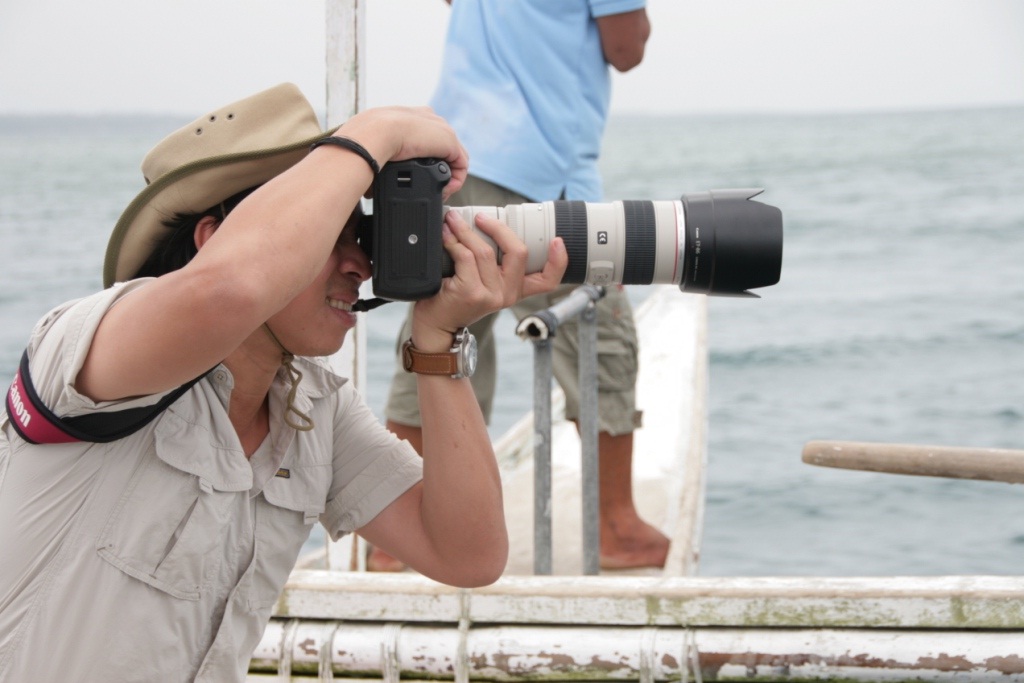 On the New Year's Day (Jan 1) episode of “Matanglawin”, Kuya Kim closely observed the behavior of the audacious matanglawin, a type of hawk that dives. He is also known as a photography enthusiast.

Interesting episodes:
A daring Kuya Kim Atienza delivered a spiel just two feet away from a venomous Siamese cobra during a special episode of "Matanglawin" filmed in Phuket, Thailand.

An episode on how animals express love and sadness and their other emotions.

An overview of the episode where Kuya Kim met Lolong, the Guinness Title Holder of the biggest captured crocodile.
A video about Pamana, an endangered specie of Eagle which can only be found in the Philippines. The eagle was rehabilitated after being found with a bullet but was able to recover after three years. He was honored to set the eagle free. Because she belongs to the wild, they had decided to set it free. However, after two months, they noticed its radar to be not moving and soon found out that she was shot again but now, she is already dead.

Check out other Philippine TV Shows:

I still can't get over the Philippine Eagle, how majestic it is and the chances that our future gene…

Video credits:GMA NewsviaYouTube In the year 2015, news about the death of a Philippine Eagle named …

Video credits: Jean Beltran via bitLanders Brrr. I could feel the toes of my feet numb as I type thi…