Camp Nou will be the backdrop for Sunday’s league meeting as Barça focus on extending their winning streak.

FC Barcelona host Levante in a late-afternoon matinée on Sunday, with kick-off set for 5.00pm CET. The blaugranes will be looking to win their 11th consecutive game – their sixth straight in La Liga – against a determined adversary fighting to climb out of the relegation zone.

As Barça’s attention turns back to the league following Wednesday night’s triumph over Villarreal in the first leg of the Spanish Cup semi-finals, theculers will head into Sunday’s match without midfielder Andrés Iniesta, who missed Saturday’s training session with the flu, and defender Dani Alves, who will be serving a one-game suspension for accumulation of yellow cards.

The team trained in a light recovery session on Thursday morning following the Cup game and had Friday off. The coaching staff officially released an 18-man squad list on Sunday morning.

Although Barça head coach Luis Enrique was upbeat about his team’s play following the mid-week Cup victory, he understands they are obliged to keep their foot on the gas if they hope to avoid any unpleasant surprises. “We're in fine form, but I never trust teams that are in a delicate situation,” he cautioned in Saturday’s press conference, where he equated the risk of facing Levante to slipping on a well-placed banana peel.

Levante head coach Lucas Alcaraz has vowed that, while he hopes they can compete on the road against Barça, his squad “will give it everything they have.” With several injured players coming back recently to join a few signings in the winter transfer market, Alcaraz optimistically sees his side in a process of “metamorphosis.” Nevertheless, their focus is on evading relegation. “Can we stop Leo Messi, Neymar, and Luís Suárez? I hope that turns out to be a long-term problem and that we’ll have the chance to come to Barcelona and face those guys every year.”

The Catalans are enjoying a run of spectacular football over the last five weeks, bolstered by a string of sterling performances both in La Liga and the Spanish Cup. During the current 10-game winning streak they have done it all while besting seasoned rivals, avoiding the pitfalls of facing opponents struggling to stay afloat in the standings, and exhibiting a keen sense of resilience whenever the chips have been down. Barça are currently in second place in the league table with 17 wins, 2 draws and 3 losses. A win over Levante would allow the culers to keep pace just a single point behind leaders Real Madrid (19 wins, 0 draws, 4 losses), who dispatched Deportivo 2–0 on Saturday.

Levante come north into the Catalan capital with aspirations of challenging the blaugranes and building on last week’s 4–1 win over Málaga. Despite that triumph, Sunday’s visitors are mired in 18th place in the league (4 wins, 7 draws, 11 losses) and would be thrilled just to put up a fight. Their stated goal for the rest of the season is simply to avoid relegation.

Who else? We’d like to give others a shot at the spotlight now and then but this week it’s impossible not to be squarely focused on Messi. The man who’s been called every superlative in the book is on the cusp of yet another milestone: his 300th league game sporting the blue and claret. He may do it with a bit of added flair as well, currently riding a nine-game home scoring streak and looking as voracious as ever. Messi is also second in La Liga in scoring with 23 goals, and closing in fast on Real Madrid’sCristiano Ronaldo, who has been stuck on 28 goals since January 18th, a five-game drought.

Forwards David Barral and Víctor Casadesús, represent Levante’s best shot at cracking the Catalan defence. They have four goals each in La Liga this season and have found the net twice each against Barça in their careers. Barral’s two came in 2011 and 2012 while playing for Sporting, while Víctor’s were in 2006 and 2012 when he was with Mallorca. Only Barral’s in 2012 came at Camp Nou.

In the first meeting this season between FC Barcelona and Levante UD at the Estadi Ciutat de València on 21 September, the blaugranes won 5–0…Levante have logged nine visits to Camp Nou in their history and have lost every time. They have been outscored by Barça 13–0 in the last three, including a 7–0 rout in last season’s opener…Messi leads Barça with 10 career goals against Levante, followed by Pedro’s five…Eight current Barça players – Messi, Xavi, Pedro, Iniesta, Alves, GerardPiqué, Ivan Rakitic and Neymar – have at least one career goal against Levante.

The game is being shown live in Barcelona and the rest of Catalonia on Canal+ Liga / HD, Gol T, Canal + Yomvi, Gol Stadium, and Canal + Liga Multi. Coverage in the United States will be on beIN Sports USA, beIN SPORTS CONNECT and beIN Sports en Español. In the UK the game will be carried on Sky Go Extra, Sky Go, NOW TV, and Sky Sports 5/HD.

No matter where you are in the world, we have you covered. Remember, you can also listen to live play-by-play in English on R@dio Barça. Twitter users can follow @FCBarcelona for live updates as the action unfolds. 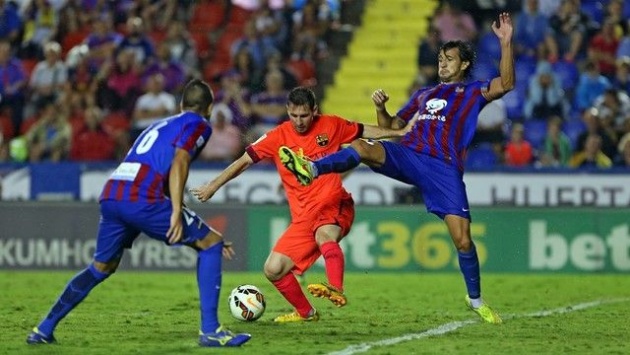