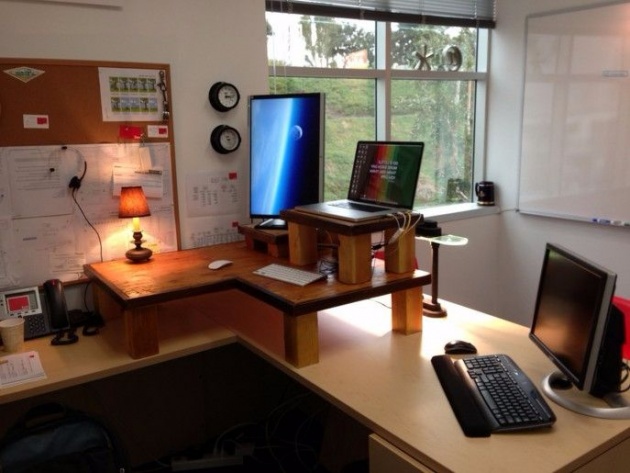 "He achieved success who has lived well, laughed often, and loved much;
Who has enjoyed the trust of pure women, the respect of intelligent men and the love of little children;
Who has filled his niche and accomplished his task;
Who has never lacked appreciation of Earth's beauty or failed to express it;
Who has left the world better than he found it,
Whether an improved poppy, a perfect poem, or a rescued soul;
Who has always looked for the best in others and given them the best he had;
Whose life was an inspiration;
Whose memory a benediction…
To know that even one life has breathed easier because you have lived,
This is to have succeeded." - Bessie Anderson Stanley

The first leaves of Autumn have begun to fall, and each new morning is now accompanied by a light breeze. Little Maddie seems to share her father’s love of the season, as she enthusiastically gathers black walnuts from the yard to feed the squirrels.

Yeah, she calls the walnuts apricots. I am not sure where that came from.

Madison has also been debriefed on the proper way to carve a jack-o-lantern, and I test her knowledge daily.

"Maddie, what’s the first thing we have to do to make a jack-o-lantern?"

"We have to carve the top and get the gunk out!"

"And what are we going to do with the gunk?"

"We are going to throw it on mommy!"

It is truly the simple things that make this life worth living.

We spend most of our time in these journal entries and especially in the Zenconomics Report discussing complex topics within the world of money, finance, and economics, but that is only because we want to be able to enjoy the simple things.

You just can't enjoy the simple things if you have to spend most of your time and energy struggling to get by financially, and the only way to avoid struggling financially is to understand how the game works... which may be the world's best-kept secret.

I have been working to complete the third edition of The Individual is Rising, and I am quite pleased with how it is turning out. The first two editions were loaded with information, but not nearly as practical and actionable as they should have been. The third edition is far superior in this regard so today I would like to share an excerpt from the chapter titled Maximize Capital; Minimize Crap.

By the way, we will be offering an advanced digital copy of the book absolutely free to members of the Zenconomics Report. Please join our network here to receive your advanced copy before the book hits the shelves..

Maximize Capital; Minimize Crap is the mantra that guides me daily.

There are plenty of people in this world who work hard, day after day, in pursuit of success... without defining what success is. To me, success is freedom - freedom to do what I want, when I want, and with whom I want. Such a desire is incompatible with working a traditional job all day, but it is also incompatible with being broke.

I know my definition of success may sound petty on the surface, but I am almost entirely uninterested in entertainment. I am interested in financial freedom specifically to work on meaningful projects which I think can make this world a more dynamic place. My observations suggest to me that most of those who achieve financial freedom share this view - they prefer meaningful work to mindless entertainment.

Now there is one way, and only one way to achieve this type of freedom. If you want to be free in this world then you must produce more than you consume and save the difference. Doing so will build a growing pool of capital which can then be used for investment. At the same time, you must minimize the acquisition of items void of utility. This does not require you to be cheap, but it does require delayed gratification.

Production-->Saving-->Capital-->Investment. This is the only way freedom works which is why every single political intervention in the economy fundamentally curtails freedom for somebody.

Studies show that people who are able to willfully forego instant gratification in favor of longer-term goals are much more successful than those who are not. Conspiracy theories aside, this is the primary secret of Old Money, and it is why most fortunes are lost within one or two generations.

While genetics almost certainly factor into one's ability to delay gratification, psychologists have found it is the development of will-power through actual use that plays the most prominent role. This suggests to me that parents have an important duty to help their children develop will-power. Of course adults have a duty to themselves to practice delayed gratification even if they never received early parental support.

Some geo-theorists actually believe this very concept can explain why certain cultures are very rich relative to other cultures. There seems to be a hint of truth to this...

Switzerland is one of the richest nations in the world, but it is nearly void of natural resources entirely and it is very difficult to grow food in Switzerland. In contrast, most African nations are very poor despite teeming with natural resources and arable farmland.

If you take a look at the map, this is a common pattern. Generally speaking, cultures that developed in colder climates with fewer natural resources tend to be more successful than others. Geo-theorists suggest this is because those cultures developed a patient, forward-looking mindset out of necessity. In other words, those cultures became very good at delaying gratification.

I suspect this cultural emphasis on delayed gratification is fading in our modern era of fiat currency capitalism, but this does not have to be the case for you. Whenever you are making a financial decision just remember the mantra: Maximize Capital; Minimize Crap. It will guide you well.

So how does one go about maximizing capital and minimizing crap? I think one must first acknowledge several painful truths:

Our monetary system is dishonest; it is used to transfer wealth from the masses to the central bankers and the politicians.
Our money is dishonest; it constantly loses purchasing power and it is backed by nothing but an $19,000,000,000,000 (and growing fast) debt.
Our educational system is dishonest; it is designed to produce compliant workers accustomed to taking orders uncritically.
Mainstream personal finance is dishonest; it is designed to maximize Wall Street’s profits by steering individuals exclusively into proprietary, heavy-commission paper equities.
The accepted conventional wisdom held by most people is wrong when it comes to the above mentioned subjects.
Now, do not allow these painful truths to anger you. This book points them out not to encourage you to fight against them, but rather to encourage you to understand them and formulate your financial plan accordingly.

So if you can accept and come to terms with these painful truths then you will be able to formulate a plan for maximizing capital. Unfortunately, those around you will not understand why in the world you are executing that plan... get used to that. Conventional wisdom considers any plan other than working hard and following mainstream personal finance to be risky or weird.

The reason so many people firmly believe in the conventional wisdom of personal finance is because it appeals to their educated common sense. Work hard, get raises, buy stuff, and invest disposable income in managed mutual funds through an IRS qualified retirement vehicle is a sensible plan for those who went through the educational system without doing any of their own research. After all, everyone does it this way!

As such, I feel it is prudent for this book to spend a little more time demonstrating why conventional personal finance is not only flawed, but also very dangerous. And I think the best place to begin is with the discussion of money.

So what is money?

We know what money does – it purchases goods and services. But can we define it?

The short answer is that money is a unit of account that serves as a medium of exchange. But this is an incomplete view. In order to be sustainable, money must have several definitive characteristics:

Money must be durable. It should be able to serve as a store of value over long periods of time.

Money must be portable. It should be practical to settle transactions with – either in person or electronically.

Money must be divisible. It should be easy to break money down into consistent smaller units that add up to consistent larger units. This is to say that you should be able to make change out of monetary units.

Money must be fungible. It should be interchangeable; each unit of money should be consistently the same.

Money must possess value. Truthfully, this one is a bit tricky because all value is subjective. That is to say, something is valuable only when people assign value to it.

As such, value is not really intrinsic, but an item's utility does prompt the assignment of value. When it comes to money, the most important facet is that it be relatively scarce and limited in quantity - otherwise people would be less interested in trading goods, services, or labor in exchange for it.

This being said, I hope you immediately recognize the flaws with using fiat currency as money. Fiat currency is certainly portable, divisible, and fungible so it has been able to serve as money, but fiat currency is not durable and it is certainly not limited in quantity. Governments and central banks have created more than ten trillion worth of fiat currency on a global scale, out of thin air, in just the past eight years alone.

This is why so many people struggle financially today. They simply do not understand that their struggles have much more to do with the abusive money system they are forced to use and not so much their own inability to manage their lives and earn a living.

My grandfather raised five children solely on a railroad worker's salary. Assuming the job still existed, this would be nearly impossible today. The reason: inflation-adjusted wages have been stagnant since the 1970's, but costs of living have exploded ever-higher. The corruption of the monetary system is the primary culprit.

So let's talk about specific solutions...

For out-of-the box coverage of market updates, major events in the financial markets, the evolution of monetary policy, and how to position your finances to benefit from developing macroeconomic trends, please join the Zenconomics Report!

We also track a small portfolio of stocks according to the Beta Investment Strategy, and the monthly newsletter explains how we think anyone can build a small fortune over the next several years by catching a major financial trend that is just now beginning to play out.

As a bonus, we include a report detailing everything you need to know about managing an investment portfolio in our Assess, Mitigate, Implement, and Prosper, and we also include a 28-page guide to the Information Age with all new subscriptions.