It started like any other day. I was wasting time on Facebook because I am a productive member of society. After a few minutes of scrolling through pictures of babies and meaningless posts from one acquaintance from high school to another I found it, a Facebook post by none other than Clark Gregg. He was going to be doing a Q&A at the SoHo Apple store about his new film, Trust Me. 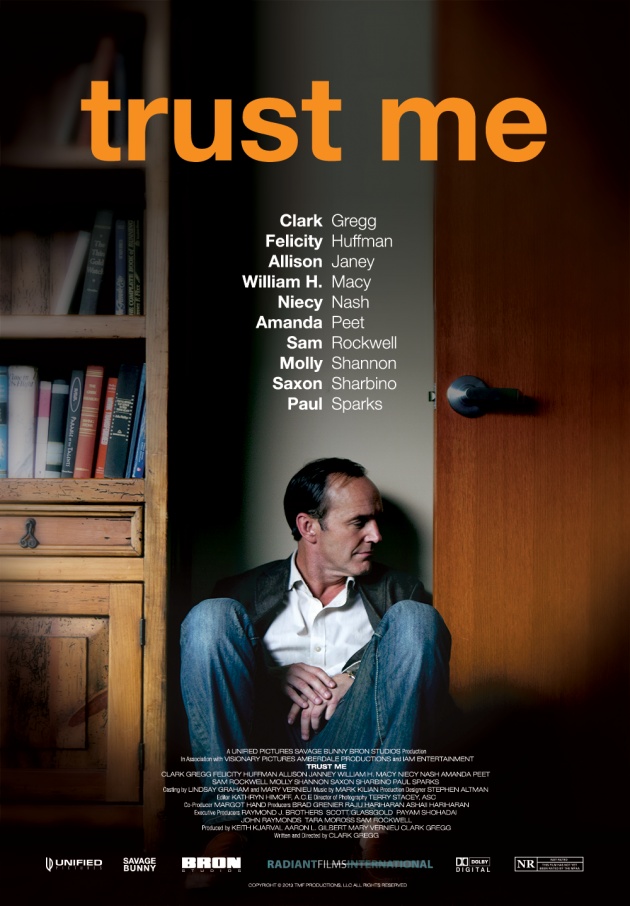 I am a huge fan of Clark Gregg. Marvel's Agents of S.H.I.E.L.D is a fantastic TV show and he is absolutely brilliant on it. A few months ago Gregg appeared on the Nerdist podcast where he talked to Chris Hardwick about this film he had written, directed, and starred in called Trust Me. Naturally, I was fascinated. I learned that Gregg had originally wanted to be more of a filmmaker rather than an actor, which as someone who is studying to work in a similar field I felt this very relevant to myself. A couple of months after Gregg appeared on the podcast I read an article that Starz had bought the distribution rights to Trust Me. Finally, I might get to see this movie that I had only briefly heard about. As Trust Me made its way through the film festival circuit I got even more excited because it was getting fantastic reviews. I needed to see this movie! Then on May 6th of this year Trust Me finally showed up on demand for purchase. I must have been the first person to buy this movie on iTunes and let me say it was well worth the money. Trust Me is one of my favorite movies of all time. I laughed, I cried, and I may have even farted a little bit.

So... back to Facebook. Clark Gregg said that he would be doing that Q&A in an Apple store that my physical being could have access to. I was going to be in the same room as Clark Gregg!

As a nerd does when excited (after the squealing and nerdgasm-ing) I immediately told one of my best friends, Sean (who is also a huge Clark Gregg fan). Well I didn't exactly talk to him; as a socially inept member of a young tech-savvy generation I texted him. I believe that the natural progression of reaction went something like this:

[NOTE: This is a dramatized retelling. There was definitely defecation but it is not evident as to whether or not it took place in a pair or pants or elsewhere.]

So we RSVP'd on the SoHo Apple store website and we were ready to go... even though the event wasn't for another few days. Then came the night before the event and I was talking to Sean about how much I loved Trust Me to which he replied, "What's that?"... facepalm. It is only the movie that he was going to promote. Filled with nerd-rage I hooked up my laptop to the TV and we watched Trust Me. It was just as amazing the second time around. Knowing what happens in the movie gave me a new perspective and I picked up on all of these little nuances that I hadn't either noticed or paid much attention to the first time I watched it.

The sun rose the next day and after a few hours of anticipation we were on a train to New York City. Again I was perusing the Internet and I clicked over to Reddit where I found that none other than Clark Gregg was doing an AMA (ask me anything) on the same day that I was going to see him do a Q&A. At first my brain told me that going to NYC would be moot since I could just ask him anything over the internet without spending money on the train. My brain then realized how absurd that was. Nothing compares to actually being near a human being, as great as Reddit AMAs are. But wait... Clark said he was at Reddit HQ. A quick Google search will tell you that Reddit is based in California... but, but, but he's supposed to be in New York. I was a little worried but you know what? I decided to give him the benefit of the doubt and he did not disappoint.

Once we arrived in the city we took the Subway downtown to SoHo and we walked a few blocks until we came upon the Apple Store. The entire time I thought it was a little odd to host an event like this in an Apple store but whatever, it was happening so I was happy. Sean and I walked into the building and suddenly it all made sense. Once you walk in and up the stairs there is a small stage along with about 3 rows of chairs and then some standing space in the back. Unfortunately Sean and I were relegated to the back while even more hardcore superfans toting #CoulsonLives tee shirts who had shown up long before us. I guess the early bird catches the worm... and the seats. 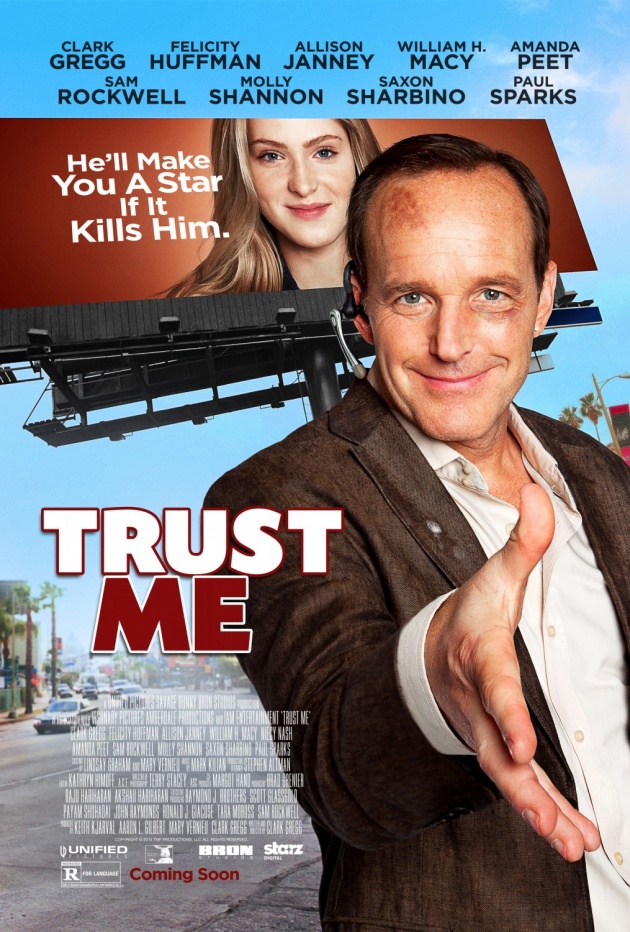 After a little bit of waiting Clark Gregg and the interviewer (I believe his name was Josh... he had some sort of affiliation with MTV) came out and they played the trailer for Trust Me. Personally I don't think that the trailer (as well as the official poster show to the right) really captures the essence of the film. They make the movie seem a little cheesy and definitely make it seem like a very happy movie. Although it has some uplifting parts, I wouldn't exactly call it the feel good film of the year.

They began with some moderated questions which for the most part were great. Clark talked how he met the cast members. William H. Macy was a professor of his at NYU where he also met fellow student and co-star Molly Shannon (who is easily one of my favorite SNL alums). He also said that the film was actually put down for a while because they needed an acting prodigy to play an acting prodigy, and that is not easy to find. Eventually the shoes were filled by the incredibly talented Saxon Sharbino. 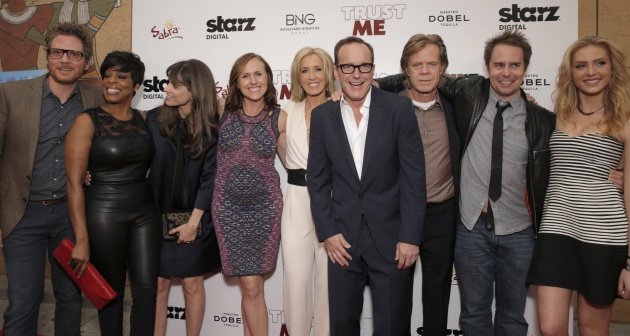 After the prepared questions it was opened up to the audience members. There we some great ones and some cringe worthy ones. My favorite moment probably was when a young boy was given the microphone. He asked Clark if he remembered him from comic con. Ouch! Not only that but he was also with Make A Wish. You can't expect that of him but you also can't expect a young kid to grasp that. I was worried by Clark played it like a master. He connected well with the kid and honestly I couldn't tell if he actually remembered him or was bull shitting. The kid then proceeded to ask Clark a question that has been asked a thousand times but never quite in this way. He asked if Gregg ,when he was in Iron Man with just a few lines, ever thought that Agent Phil Coulson would become one of the most "legendary" characters of all time. Understandably Clark was choked up by the question. It must be an unreal feeling when a young boy (with freaking cancer) idolizes you and calls your character (one not derived from the comics or played by anyone else) legendary. Once he collected himself Clark gave the young boy a long, caring, and thought out answer. It was incredible.

I won't go into any more details about the questions from that evening because the entire thing is available as a free podcast on iTunes which you can find by clicking here.

It was an amazing night and Clark Gregg was just as funny an charming as ever. If you have not already done so check out Trust Me on iTunes and don't forget that season 2 of Marvel's Agents of S.H.I.E.L.D premieres this fall. Clark, if for some reason you are reading this, thank you for this amazing film and keep doing what you're doing because you are "legendary."