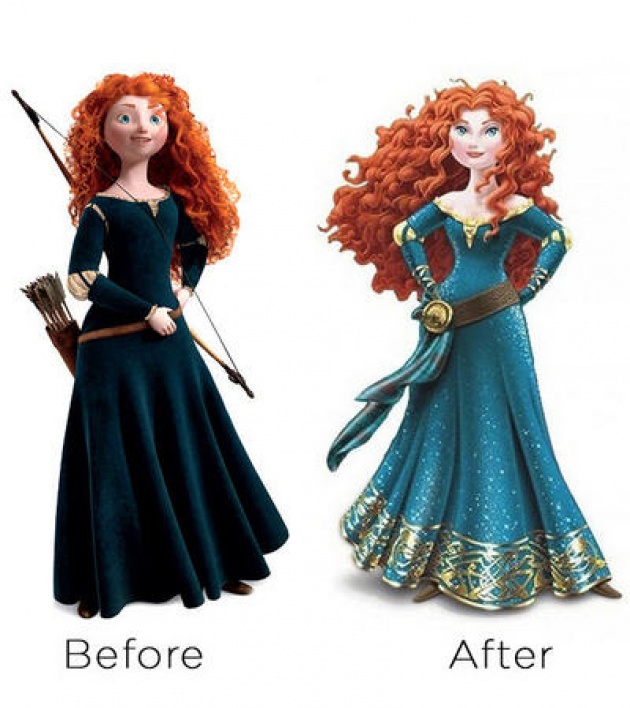 Just look at the picture above -- before, for the movie "Brave," Merida is tomboyish in stature, even a little chubby with baby fat. Then, when Disney announced that Merida would be the 11th official princess, all hell broke loose. Why? Because the studio sexified the character, complete with vivacious curves and much thicker, fuller set of hair!

Many protested the new image of Merida, even prompting a Change.org petition headed by A Mighty Girl, a blog and online girl empowerment site. Right now, the petition has garnered a 129,278 signatures! The crux of the petition claims that:

The redesign of Merida in advance of her official induction to the Disney Princess collection does a tremendous disservice to the millions of children for whom Merida is an empowering role model who speaks to girls' capacity to be change agents in the world rather than just trophies to be admired. Moreover, by making her skinnier, sexier and more mature in appearance, you are sending a message to girls that the original, realistic, teenage-appearing version of Merida is inferior; that for girls and women to have value -- to be recognized as true princesses -- they must conform to a narrow definition of beauty.

And now, Brenda Chapman, the director of "Brave," wrote to her local newspaper, the Marin Independent Journal, in protest of Disney's new version of Merida saying that: "I think it's atrocious what they have done to Merida."

Chapman, the first woman to win an Academy Award for an animated feature further revealed that, "When little girls say they like it because it's more sparkly, that's all fine and good but, subconsciously, they are soaking in the sexy 'come hither' look and the skinny aspect of the new version. It's horrible! Merida was created to break that mold — to give young girls a better, stronger role model, a more attainable role model, something of substance, not just a pretty face that waits around for romance."

Disney's response to the criticisms? Here's what the studio said to Yahoo:

"Merida exemplifies what it means to be a Disney Princess through being brave, passionate, and confident and she remains the same strong and determined Merida from the movie whose inner qualities have inspired moms and daughters around the world."

That's fine and dandy but Chapman was not having it! She further wrote, "They have been handed an opportunity on a silver platter to give their consumers something of more substance and quality — THAT WILL STILL SELL — and they have a total disregard for it in the name of their narrow minded view of what will make money."

And here's the kicker, "I forget that Disney's goal is to make money without concern for integrity. Silly me."