Messi breaks record as FC Barcelona take down Sevilla by the horns, 5-1 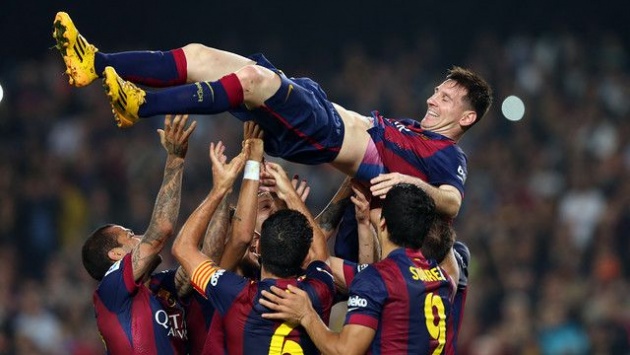 Lionel Messi had a hat trick to break the all-time La Liga goal scoring record and propel FC Barcelona to a runaway victory over Sevilla on Saturday night at Camp Nou.

Messi was brought down just outside the penalty area in the 20th minute and then curled the ensuing direct kick over a leaping four-man wall into the upper left corner. Sevilla keeper Beto tried his best but couldn’t even get a hand on it.

It was the 251st career goal in La Liga for the four-time Ballon d’Or winner. It also tied him with Telmo Zarra, who played for Athletic Bilbao and had held the record since 1955.

Messi had been trying to tie the record for weeks, but had run into a combination of stifling defences intent on stopping him with double and triple teams and sheer bad luck, including several shots over that span that hit the woodwork.

There was a general feeling throughout the Catalan capital earlier this week that the record was likely to fall versus Sevilla, as the Andalusian side have historically been one of Messi’s favourite victims. Heading into Saturday’s match, he had burned Sevilla for 18 career goals.

Barça dominated the first half with nearly seventy per cent possession. One of the keys was Sergio Busquets, who stood tall in midfield and effectively put the brakes on any thought Sevilla had of making a counterattack.

Just before the half ended, Barça had a pair of golden opportunities to extend the lead but a last ditch defensive effort swept away Jordi Alba’s five-hole shot that had beaten Beto who, a few seconds later, made a marvellous one-handed stop on a Neymar shot from point-blank range.

The second half was barely underway when Sevilla sent a dangerous cross into Barça’s area that somehow made it through Claudio Bravo as he arrived to the ball at the same time as a Sevilla attacker. Jordi Alba was not expecting it to bounce his way and couldn't get out of the way in time, deflecting it off his leg into the net for an own goal, allowing Sevilla to draw even at 1-1 despite not having registered a shot.

Barely 2 minutes later, Barça had just re-entered Sevilla’s half of he pitch when Xavi chipped a free kick that caught the Sevilla defence flat-footed in the area and found Neymar, who brilliantly headed past a diving Beto and into the back right corner of the net to retake the lead.

In the 65th minute, Luis Suárez got loose on the right wing and sprinted to catch up to a deep ball just before the end line. Suárez, who had been relatively quiet up until that point, corralled the sphere and floated a pass across to the far post, where Ivan Rakitic headed home for a 3-1 lead. Rakitic, playing against his ex-team for the first time, declined to celebrate the goal out of respect.

The new king of Spain

But despite the second-half onslaught, it wasn’t until the 72nd minute that the fans got what they came to see. Barça broke out on a three-on-two with Messi leading the way. He fed Neymar to the left, but the Brazilian passed up a clear shot on goal to give it back to Messi. It was a risky pass into the goal mouth but Leo finished with class to extend the lead and surpass Zarra.

Messi was immediately mobbed by his teammates who tossed him into the air as the crowd broke into a standing ovation, chanting his name in unison.

And to put the icing on the cake, the newly minted record-holder struck again with another fine feed from Neymar, blasting a low shot into the left corner from 17 metres for his third goal of the evening and the 253rd of his career in La Liga.

Need your Attention Please!Is your laptop more important than a desk top for the Kindergarten school…

Great News! MDF Russia has now been funded and our MDF Ambassador will be in Russia on Monday and wi…

Hello everyone. Just a few updates.The handmade flowers that have arrived will now be arranged and p…

An Appeal from Michael's Dream Foundation.

RIGHT NOW WE ARE IN NEED OF $1500 to finish the school project in Ghana. We are asking everyone to p…

Can we count on your support?

Can we count on your help fellow MDF supporters? Donations for the playground and sunflowers are com…