Under the proposals, 120,000 asylum seekers will be distributed among EU member countries, with binding quotas.

This comes after thousands of mainly Syrian migrants began trekking northwards through Europe this weekend.

Hungary has been warned to expect an additional 40,000 migrants by the end of next week.

Hungary has become a key point on the journey north for the migrants, with more than 150,000 people arriving this year.

The authorities there are now reinforcing a border fence designed to keep migrants from entering from Serbia and are toughening asylum laws.

In a separate development Australia, which has been under pressure to do more to help displaced people, has announced plans to take in more Syrian refugees.

The government said it would accept 12,000 Syrian refugees from persecuted minorities.

The migrant crisis and how to resolve it has exposed divisions within the EU.

The Czech Republic, Slovakia, Poland and Romania have opposed the idea of mandatory quotas.

On Tuesday, though, Poland appeared to soften its position. Prime Minister Ewa Kopacz said the country would accept more migrants than the 2,000 it first offered to take.

Germany has welcomed Syrian migrants, waiving EU rules and saying it expects to deal with 800,000 asylum seekers this year alone. Vice Chancellor Sigmar Gabriel said his country could cope with 500,000 a year for several years to come.

Hundreds continue to enter Macedonia as they head north 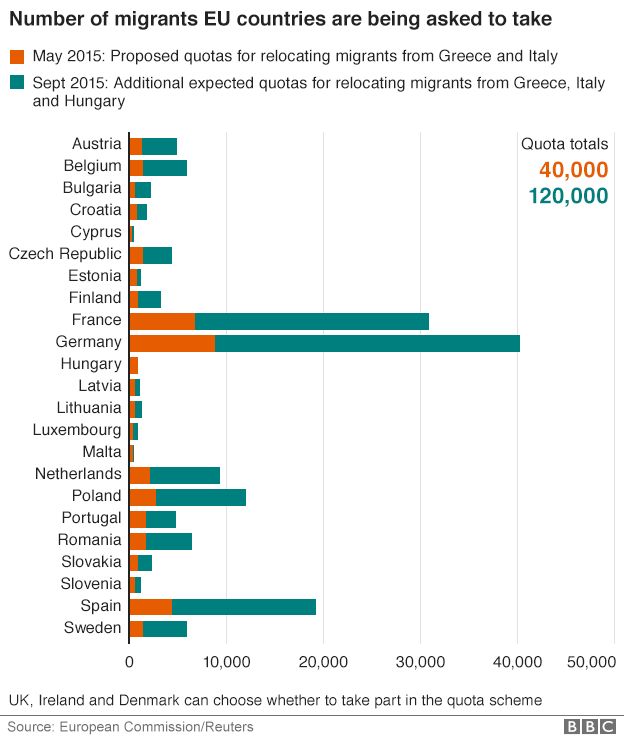 The planned EU quota system would allocate 60% of migrants now in Italy, Greece and Hungary to Germany, France and Spain, reports say.

The numbers distributed to each country would depend on GDP, population, unemployment rate and asylum applications already processed.

Countries refusing to take in migrants could face financial penalties.

Also planned are measures to help the economies of countries in the Middle East and Africa, and deter people-smugglers.

Speaking alongside the visiting Swedish Prime Minister, Stefan Lofven, she added that the EU needed an open-ended "system to share out those with a right to asylum".

"It is clear that this is a serious crisis, but for me it is also clear that if Europe would be properly organised, it would be a manageable crisis. We are talking about 4-5,000 people per day, in a union that has 508 million people".

What next for Germany's asylum seekers?

What can the EU do to solve the crisis?

The other exodus to Germany - people from the Balkans

Are you affected by the crisis?

The mass migration has seen those seeking an end to persecution, conflict and hardship travel by boat, bus, train and on foot, from Turkey, across the sea to Greece, through Macedonia and Serbia, and then to Hungary from where they aim to reach Austria, Germany and Sweden.

Hundreds continued to cross on Tuesday from Serbia into Hungary, where there were scuffles with police and a protest against being registered, with migrants chanting "no fingerprints".

A Hungarian TV camerawoman was sacked after she was accused of deliberately tripping up a male migrant carrying a child.

The two migrants, who fell to the ground, were among dozens fleeing police during a disturbance near a registration centre at Roszke.

More migrants came northwards through Macedonia from the border with Greece.

The UNHCR says a record 7,000 Syrian migrants arrived in Macedonia alone on Monday and 30,000 were on Greek islands.

The Greek island of Lesbos has seen a build-up of 20,000 migrants, some living in squalid conditions while they wait to be processed.

The UNHCR meanwhile highlighted the growing scale of the challenge, releasing new figures that suggest it expects 400,000 migrants to have arrived in Europe by sea in 2015.

The majority are Syrian, and the UN says many are now seeking a better life in Europe because of poor conditions in refugee camps in Jordan and Lebanon - caused in part because of a drastic shortfall in multilateral aid programmes.