Police in Austria say three Syrian children and their families who were rescued from a minivan containing 26 migrants have disappeared from the hospital where they were being treated.

The children were taken to hospital in the town of Braunau am Inn on Friday suffering from severe dehydration.

Their discovery came a day after police found 71 bodies, thought to be people fleeing Syria, in a lorry in Austria.

Meanwhile the EU has announced urgent talks on the escalating migrant crisis.

A record number of 107,500 migrants reached the EU's borders last month. At least 2,500 have died since January, most of them drowning in the Mediterranean. Some of them pay large sums of money to people smugglers.

Crammed in a van

Austrian police said they stopped the minivan in Braunau, which sits on the country's border with Germany, on Friday and arrested its Romanian driver.

The children - two girls and a boy aged between one and five years old - were said to have been crammed in the back along with other migrants from Syria, Afghanistan and Bangladesh.

Police said they were critically ill and almost unconscious when they were found.

in Braunau says they and their families disappeared from the hospital at some point on Saturday.

Authorities believe they may have tried to cross the border into Germany, rather than face deportation back to Hungary.

Separately on Sunday, Hungarian police said they had arrested a fifth man over the deaths of the 71 people who were found in the abandoned lorry in Austria last Thursday.

The man is the fourth Bulgarian to be held over the find near the Hungarian border. The other man is Afghan. Authorities believe the men are low-level members of a human trafficking gang.

Next month's emergency meeting was announced after Germany, France and the UK called for "concrete steps" to resolve the issue.

They want migrants to be fingerprinted and registered when they arrive in Italy or Greece. They also said the EU should establish a list of "safe countries of origin" that would allow immediate repatriation of some migrants.

"When I see a certain number of European countries, particularly in the east, who do not accept quotas [of migrants], I find it scandalous," he told French radio station Europe 1 (in French).

He pointed specifically to Hungary's 175km (108 mile) razor-wire barrier along its border with Serbia, saying it "did not respect Europe's common values".

Hungary says it plans to replace the temporary barrier, which was completed on Saturday, with a 4m-high (13ft) fence to "provide a defence against illegal border-crossers".

So far this month more than 40,000 asylum seekers, the majority of them Syrian, have arrived in Hungary via the Balkans.

On Sunday, Pope Francis led prayers in St Peter's Square for migrants who die "on their terrible journeys" and urged co-operation "to impede these crimes, which offend the entire human family". 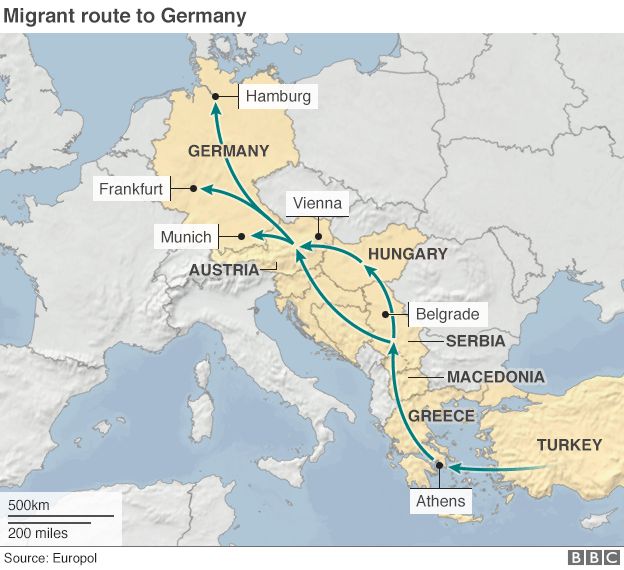