Thousands of migrants have resumed their journey north through Macedonia and into Serbia after Macedonia reopened its border with Greece.

Many migrants had been stuck at the border for days after Macedonia declared a state of emergency and sealed the crossing.

On Sunday, they were able to board trains and buses that took them north to the border with Serbia.

Most are seeking to travel to northern Europe, via Hungary.

Many of the migrants are Syrians, Iraqis and Afghans fleeing from conflicts in their home countries.

Macedonia reopened its border with Greece overnight after a stand-off lasting several days.

Some migrants had managed to force their way through despite the closure, clambering over barbed wire fences, but others were blocked by police using stun grenades.

Many, including pregnant women and small children, camped out in the open as they waited, with little access to food or water.

On Sunday, Macedonian authorities were making no apparent effort to limit the numbers crossing from Greece.

Corinne Ambler, a Red Cross official at the Macedonian border town of Gevgelija said there were "far too many" people to help.

"We're just trying to concentrate on the most vulnerable people, the people with injuries, people with young children," she told the BBC.

"There are many, many children and it's very hot today and there are many people fainting from the heat, and elderly people as well."

At the border with Serbia, Serbian Defence Minister Bratislav Gasic, who was visiting a reception centre, said more than 5,000 people had crossed overnight.

"A huge number of people have arrived and we expect the same intensity in the next day or two."

Europe is currently facing what the EU has called the worst refugee crisis since World War Two.

Macedonia says that before this weekend, more than 42,000 people had entered the country from Greece since mid-June.

Greece itself has seen almost 160,000 people landing on its shores since January, the UN estimates, with 50,000 arriving in the past month alone.

This means that once in Hungary people can travel onwards throughout much of Europe (excluding Britain and Ireland) without needing to show documents at international borders.

Hungary's conservative government is building a four-metre (13ft) steel fence along 175km (109 miles) of its border to try to stop the flow of migrants.

It is also sending thousands of police officers to the southern border, and haspassed a law tightening asylum rules. 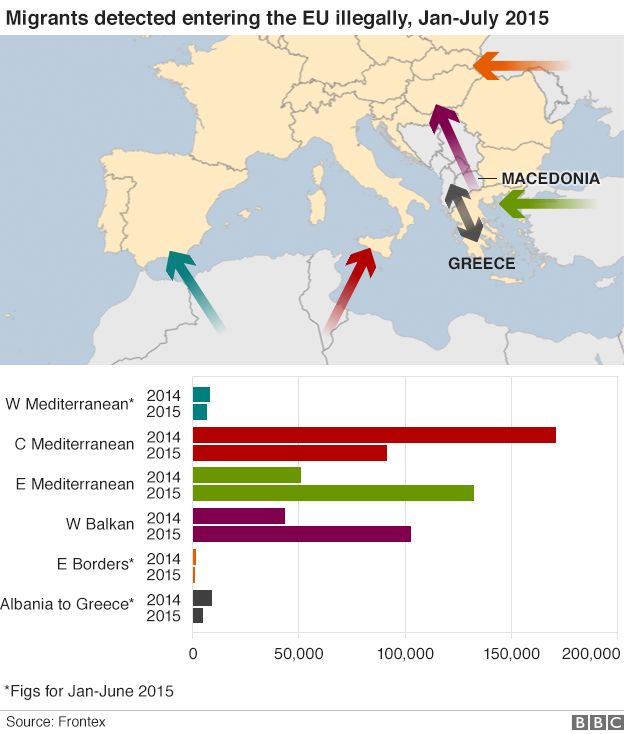