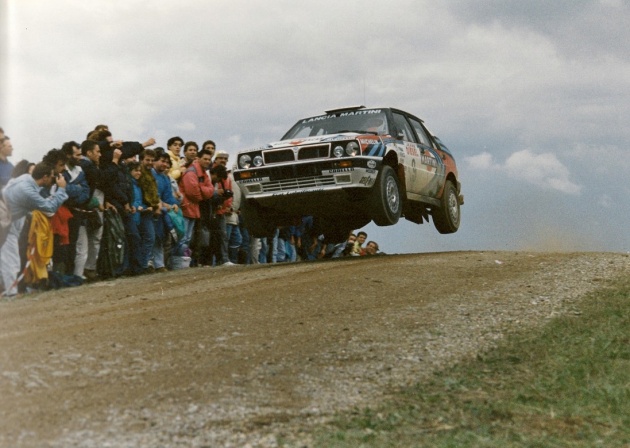 It was ‘85 when we met, she had very sophisticated and brutal reactions, we continued to hang out when the new regulations have forced her to calm herself. We were together until '91 and they were intense and beautiful years.
We almost never separated each other, when, in a rally and the other, my teammates took a few days off, I was starting testing.
Ten, twelve hours a day to go back and forth on a few kilometers to test this and that, to determine whether changes to table designed by the Abarth’s engineers were effective. To come up with something to make it faster, more competitive.
All of this more than three hundred days a year for seven seasons, enough to say that in my life I spent more time driving a Delta than doing other things .
After the interlude with the S4 which was the exaltation of risk and courage, it came the 4WD. In autumn day 86, our first contact, the first approach.
Nothing really exciting, and not just because a steering head broke off and I put it in my head. By five hundred CVs for version as a Group B, the power was down to 250-260 and the feeling was frustrating.
It was not easy, but I did it. And now I can say I am proud to have contributed, working closely with the engineers Lombardi, Limone and Ferrero, to revive a model which in fact was now out of business.
I ran and won and in the meantime I continued to study and test solutions that would allow us to remain at the forefront challenging teams that had budget increasingly important.
With the latest version Integral 16-valve without flange to limit the intake air, the red livery that I used to Sanremo 89, were available 380-390 CVs and went sideways even on asphalt.
Filing here and there, molding, all together we had turned into a real race car, the only Italian car able of winning three times in succession, the Safari Rally in Kenya.

According to UCSF, team building is an ongoing process that helps a team to bond together. There are…