Misplaced Musical Nostalgia: A review of 'The Monuments Men.'

So I just saw the new film from George Clooney, the awkwardly titled 'The Monuments Men,' (Wouldn't it just sound better as just 'The Monument Men? I think so, yes.) and I found it just as underwhelming as it seems most everyone else found it as well. 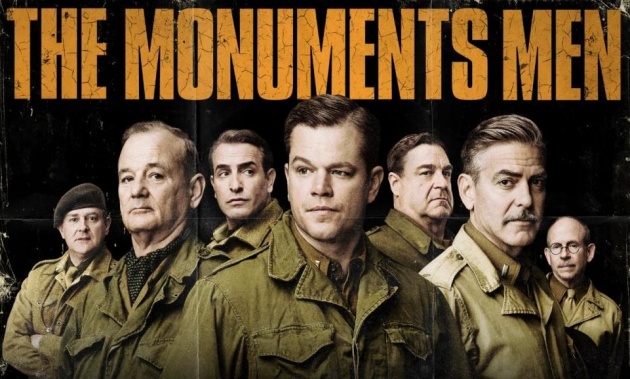 (Look at all these people who you definitely can imagine as being in WWII, like, for real, I mean, seriously, you guys, they aren't actors playing characters who's defining characteristics are that they are being played by...the famous actors who are...playing them....)

This film's main problem is that of tone. And a lot of the tone problem comes from the heavily dramatic and intentionally cheesy throwback music that plays throughout the film, as composed by Alexandre Desplat (Whose work is normally fine!)

The film is full of upbeat, exciting 'you go get those bad guys' type of music, as was often heard in films from this time period. However the crazy upbeat marching music used during films of the war time was used to MAKE it seem better, and more exciting and noble and, in a sense, fantastical and escapist. While music of the time sounded like this, the actual war itself most certainly did not...There is a huge difference between the gung-ho atmosphere of a war news reel and the war itself.

So, as a modern audience watching this film full of famously recognizable actors marching about in 'war' set to music that quite literally sounds like early rejected versions of the theme from 'The Great Escape' the sense of gravitas that should exist just doesn't. That is, until they try with GREAT HEAVY HANDEDNESS to shove that drama and gravity onto us. And that doesn't work either. It just makes the film feel awkward, lumpy and slow. Which it is. The concept of whether art is truly worth dying for and fighting for is a fascinating and deep one. And the film wiggles and waggles around this deep meaning for almost the entire running time until the very last scene, in which the question of whether dying for art is worth it is LITERALLY ASKED to the main character. I mean, to put it simply: WOOF.

There are some decent moments, but they are so surrounded by long stretches of unfortunate dullness that it just doesn't balance out. I'd say that now I am curious about reading the book about the true events that this film is based on, but the execution of the book in the film is just awkward and poorly rendered.

I'd say skip going to see this film I suppose. Unless you are dead set on seeing it for some reason, or can see it as some epically discounted price.