Monster Mash Monday: The Mummy vs. The Shrunken Head 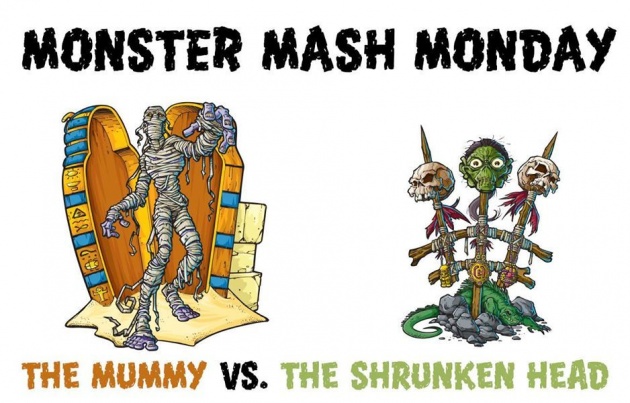 This week, we have a mash for the ages: The Mummy vs. The Shrunken Head.  Which of these ancient and mysterious monsters would make the other ancient history?

Somewhere far within the tunnels of the ancient pyramid… that strange, shadowy figure lurking in the darkest corner of the dustiest pit of the deepest, most mysterious chamber is always glad to have a new visitor. Say hello to the mummy. His cloth-covered face shows no emotion. Heavy, dead legs lumber forward on bandaged feet, slowly shuffling on amidst the swirling pyramid dust, a terrifying scraping sound now echoing through the ancient walls. Scrape. Scrape. Scrape. Being dead is a lonely business, and having but one trick up his sleeve, scaring his visitors to death the mummy will not hesitate to use it. So here’s some advice - don’t get on his case!

Wrinkled up into a tight, green pruneface, this leathery, sticky, warm skull with the thick black hair on top is as big and hard as a baseball - with bulging eyes and pale, dry stitched lips stretched into a hideous scowl. Legend has it Shrunken Head is over 100 years old. It’s small enough to carry in your pocket, and some say it can bring good luck. But just beware when this extraordinary runthead gets a whiff of that rare, mysterious power called Jungle Magic. That’s when Shrunken Head really comes to life! Watch the dark eyes of the head suddenly gleam and glow bright yellow like a freaky flashlight to point you in the right direction. Feel the flickering flames of fire start to burn around it when the power really starts to turn on. Scream in terror as its purple, brown lips quiver and twitch into a twisted, horrifying smile. Remember, whatever happens, don’t let the Shrunken Head fall into the wrong hands. Because if anyone or anything evil gets a hold of this pint-sized monstrosity, heads won’t only roll, they’ll shrink - including yours!

So who do you think would win? The Mummy or The Shrunken Head? Comment your answer below.