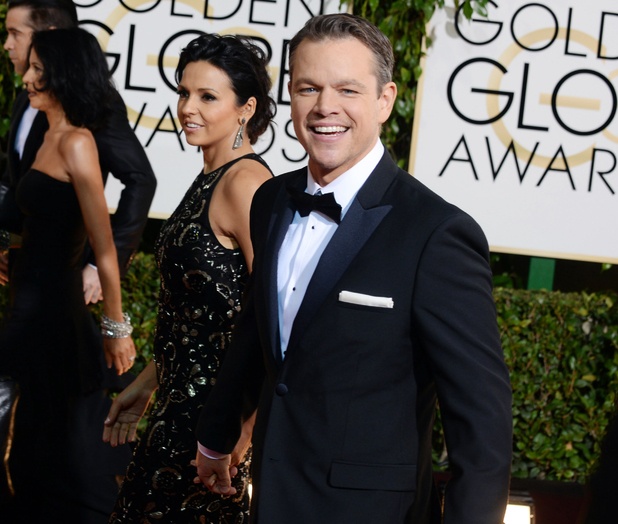 And here's the rest of the press release we received from the Guild:

Matt Damon was nominated for his first two Actor® awards in 1998 for both leading and cast member roles in “Good Will Hunting.” He is recognized this year for his performance as Scott Thorson in Steven Soderbergh's telefilm “Behind the Candelabra.” Damon's previous nominations were for supporting and cast performances in “Invictus,” “The Departed,” and “Saving Private Ryan.”  He will next appear in George Clooney's World War II action film, “The Monuments Men,” alongside Cate Blanchett, Bill Murray and John Goodman.

Last year, Robert DeNiro received his second and third Actor® nominations for playing Pat Sr. in “Silver Linings Playbook” (Outstanding Performance by a Male Actor in a Supporting Role, Performance by a Cast in a Motion Picture).  In 1997, DeNiro received his first Actor® nod for Performance by a Cast in a Motion Picture for “Marvin’s Room.” DeNiro’s other film credits include “The Deer Hunter,” “Raging Bull,” “The Untouchables,” “Goodfellas,” “Cape Fear,” “A Bronx Tale,” “Heat,” “Men of Honor,” “Meet the Fockers,” and “Last Vegas.”

Ken Howard is the first elected president of Screen Actors Guild-American Federation of Television and Radio Artists (SAG-AFTRA). Prior to the merger, Howard served two terms as president of Screen Actors Guild. Howard is an accomplished actor and the recipient of a Tony® Award for his Broadway performance in "Child's Play" and received an Emmy® award for his role as Phelan Beale in HBO's 2009 hit "Grey Gardens."  Howard can next be seen in "Better Living Through Chemistry" and "The Judge."

Mindy Kaling is a two-time Actor® recipient for Outstanding Performance by an Ensemble in a Comedy Series for her role in "The Office." She received five consecutive cast nominations for the series from 2009 to 2013. She is the creator, writer, and star of the current series "The Mindy Project" on Fox.

Jennifer Lawrence is a two-time SAG Award nominee this year for her supporting role of Rosalyn Rosenfeld in “American Hustle” and as a member of the film’s cast. She won her first Actor® award last year for Outstanding Performance by a Female Actor in a Leading Role for "Silver Linings Playbook," for which she also received a cast nomination. Lawrence earned her first SAG Award nomination in 2011 for her leading role in Debra Granik's “Winter’s Bone." She will next be seen in "X-Men: Days of Future Past" reprising her role of the shape-shifter Mystique, opposite Michael Fassbender and James McAvoy.

James Marsden is nominated for two Actor® awards this year for both film and television performances. He's earned a nomination for Outstanding Performance by a Cast in a Motion Picture for portraying John F. Kennedy in "Lee Daniels' The Butler," and a nod for Outstanding Performance by an Ensemble in a Comedy Series in the NBC hit "30 Rock." In 2008 he was part of the nominated ensemble for his role in the film "Hairspray." He can currently be seen in "Anchorman 2" and stars in the comedy "Walk of Shame" alongside Elizabeth Banks this spring.

Sarah Paulson earns her first SAG Award nomination this year as a member of the "12 Years a Slave" cast in which she plays Mistress Epps. Paulson currently stars in the critically acclaimed series "American Horror Story: Coven" on FX opposite fellow SAG nominee Jessica Lange. Paulson previously received awards recognition for her performance as Lana Winters in the series’ second season, “American Horror Story: Asylum,” as well as for her performance as Nicolle Wallace in HBO's “Game Change.”

Elisabeth Röhm portrayed Dolly Polito in the silver screen hit "American Hustle" for which she is nominee for Outstanding Performance by the Cast of A Motion Picture.  She was nominated in 2002 and 2004 for Outstanding Performance by an Ensemble in a Drama Series for her work on "Law and Order."  Röhm’s other film credits include "Miss Congeniality II," "Abduction,” and "Officer Down."

Julia Roberts received her second and third SAG Award® nominations this year for her performance in “August: Osage County” (Performance by a Female Actor in a Supporting Role, Performance by a Cast in a Motion Picture).  Roberts received her first Actor® nod in 2001 for her leading performance in “Erin Brokovich.”  Her other film credits include “Mystic Pizza,” “Steel Magnolias,” “Pretty Woman,” “Something to Talk About,” “My Best Friends Wedding,” “Notting Hill,” “Oceans Eleven,” and “Eat Pray Love.”

Meryl Streep has been nominated for an Actor® a total of 12 times, receiving two SAG Awards for her leading performances in the mini-series “Angels in America” (2004) and the motion picture “Doubt” (2009). This year, she is nominated for her leading role as well as for her performance in the cast of “August: Osage County.”  Streep’s other film credits include “The Iron Lady,” “Sophie’s Choice,” “Kramer Vs. Kramer,” “Adaptation,” “The Hours,” and “The Devil Wears Prada.”  Next up she stars in “The Giver” and “Into the Woods.”

Emma Thompson received her sixth Actor® nomination for her leading role in “Saving Mr. Banks.”  She was previously nominated for her roles in “Sense and Sensibility” (for which she also wrote the screenplay), “Wit,” “Angels in America,” and “An Education.”  Her screen credits include “Howard’s End,” “The Remains of the Day,” “In the Name of the Father,” “Love Actually,” “Stranger Than Fiction,” “Harry Potter and the Prisoner of Azkaban,” and the two “Nanny McPhee” films, which she also wrote.