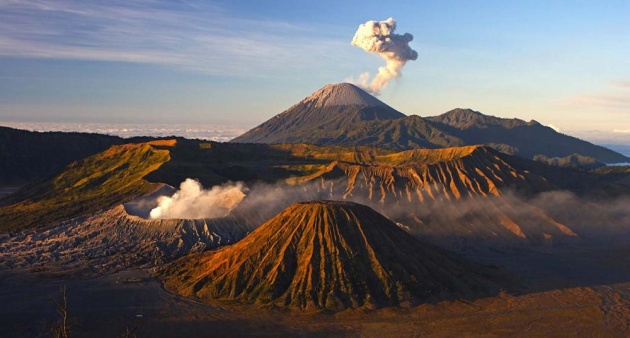 Mount Bromo is an active volcano and part of the Tengger massif, in East Java, Indonesia. At 2,329 metres (7,641 ft) it is not the highest peak of the massif, but is the most well known. The massif area is one of the most visited tourist attractions in East Java, Indonesia. The volcano belongs to the Bromo Tengger Semeru National Park. The name of Bromo derived from Javanese pronunciation of Brahma, the Hindu creator god. Sulfur is collected from inside the caldera by workers. 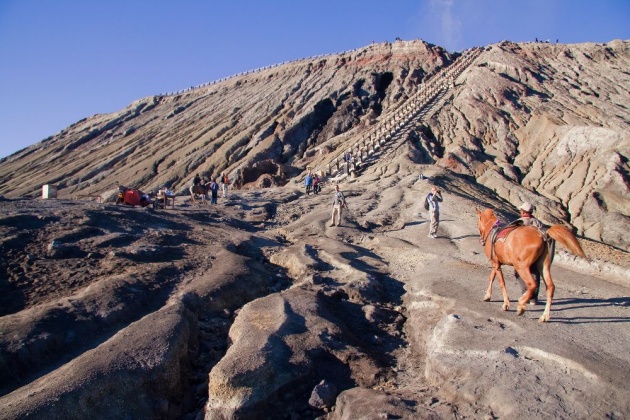 Mount Bromo sits in the middle of a vast plain called the "Sea of Sand", a protected nature reserve since 1919. The typical way to visit Mount Bromo is from the nearby mountain village of Cemoro Lawang. From there it is possible to walk to the volcano in about 45 minutes, but it is also possible to take an organised jeep tour, which includes a stop at the viewpoint on Mount Penanjakan (2,770 m or 9,088 ft) (Indonesian: Gunung Penanjakan). The viewpoint on Mount Penanjakan can also be reached on foot in about two hours.

Depending on the degree of volcanic activity, the Indonesian Centre for Volcanology and Disaster Hazard Mitigation sometimes issues warnings against visiting Mount Bromo. 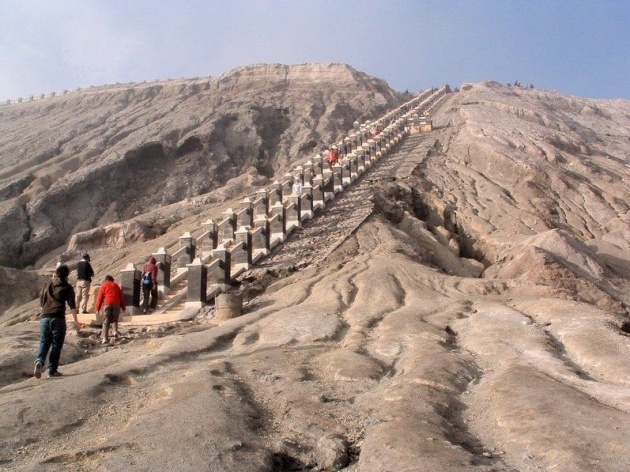 Mount Bromo erupted in 2004. That eruptive episode led to the death of two people who had been hit by rocks from the explosion. 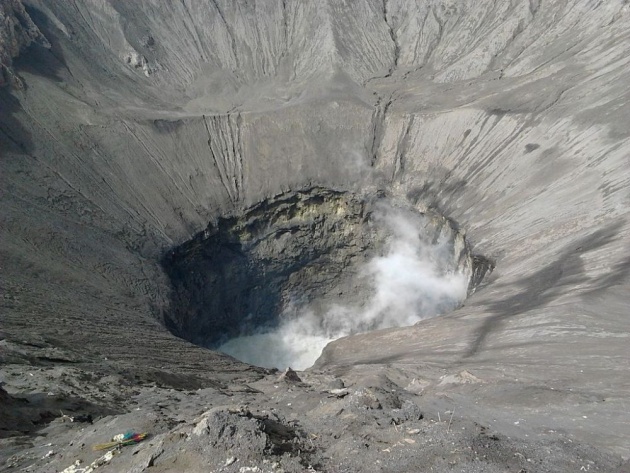 On Tuesday, 23 November 2010, 16.30, the Indonesian Centre of Vulcanology and Geology Hazard Mitigation (CVGHM) confirmed the activity status of Mount Bromo at "alert" due to increasing tremor activity and shallow volcanic earthquakes at the mountain. Concerns were raised that a volcanic eruption might be likely to occur. As a precaution local residents and tourists were instructed to remain clear of an area within a radius of three kilometres from the caldera and refugee encampments were erected. The area surrounding the Teggera caldera of Bromo remained off-limits for visitors throughout the remainder of 2010.

On 29 November 2010 Transport Ministry spokesman Bambang Ervan announced that Malang's domestic airport would be closed until 4 December 2010. Malang is a city of about 800,000 people is about 25 km (16 mi) west of Mount Bromo. Abdul Rachman Saleh Airport normally handles 10 daily domestic flights from the capital Jakarta. Government volcanologist Surono reported that the volcano was spitting columns of ash some 700 metres (2,300 feet) into the sky. 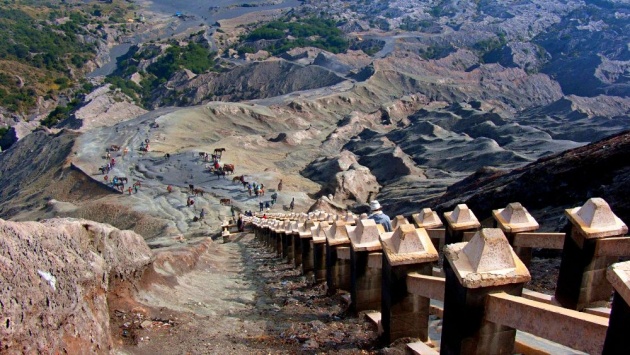 The Tengger Caldera was still active in late January 2011, the activity being characterised by fluctuating ongoing eruptions. On 23 January 2011 the Indonesian Centre for Volcanology and Geological Hazard Mitigation (CVGHM) (Pusat Vulkanologi dan Mitigasi Bencana Geologi) reported that since 19 December 2010 volcanic ash and incandescent material had been thrown up by eruptive activity resulting in a heavy rain of material that fell around the crater. Continuous eruptions on 21 January caused a thin ash fall mainly in the village areas of Ngadirejo and Sukapura Wonokerto in Probolinggo district. 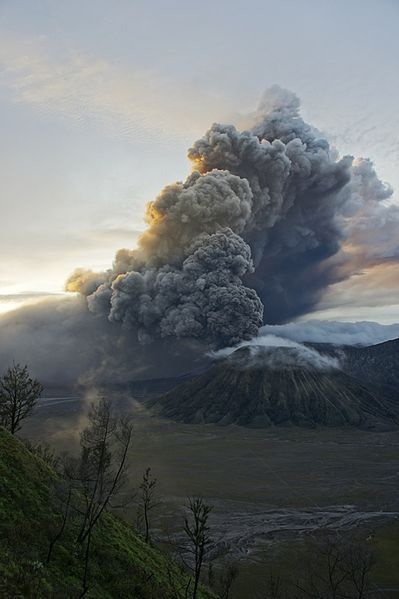 The eruption of the volcano Mount Bromo, Indonesia January 22, 2011 at 5:30 am, shortly after sunrise. Bromo volcano crater itself is not visible, hidden behind the volcano Batok.

The impact of a heavy rain of volcanic ash from eruptions since 19 December 2010 resulted in disruption of normal activities. By early 2011 concerns were being raised concerning the effect upon the local economy and the potential for long term environmental and health problems amongst the residents in the locality surrounding Mount Bromo. Due to high seasonal rainfall in January 2011 the potential for lahar and lava flow was raised due to the deposits of volcanic ash, sand and other ejected material that had built up. Seismic activity was dominated by tremor vibration and reports of visual intensity and sounds of eruption continued to be reported from the mountain monitoring facility, Bromo Observation Post. People living on the banks of the Perahu Ravine, Nganten Ravine and Sukapura River were alerted to the possibility of lava flows, especially when it was raining heavily in the area around Cemorolawang, Ngadisari and Ngadirejo. Eruptions and volcanic tremors were reported on 21 January and 22 January with activity subsiding on 23 January 2011. On 23 January 2011 at 06:00 am the alert status at Mount Bromo remained at (Level III). 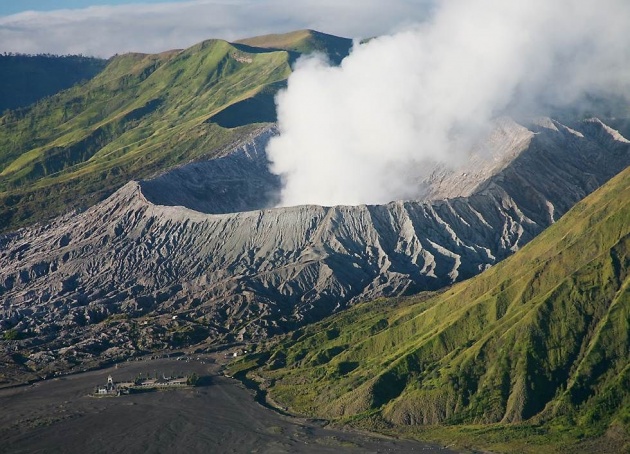 On 23 January 2011 an exclusion zone was recommended for communities living around Mount Bromo. Tourists and hikers were to advised not to come within a radius of 2 km from the active crater. CVGHM stated that they expected warning signs to be installed stating the limit radius of 2 km from the crater. Operational caution was recommended for flights into and leaving Juanda International Airport IATA:SUB in Surabaya. CVGHM recommended the establishment of public areas for the provision of face masks and eye protection. CVGHM also issued a warning to residents to be cautious of ash build up on roofs and other places that may give cause for collapse under the burden of ash. 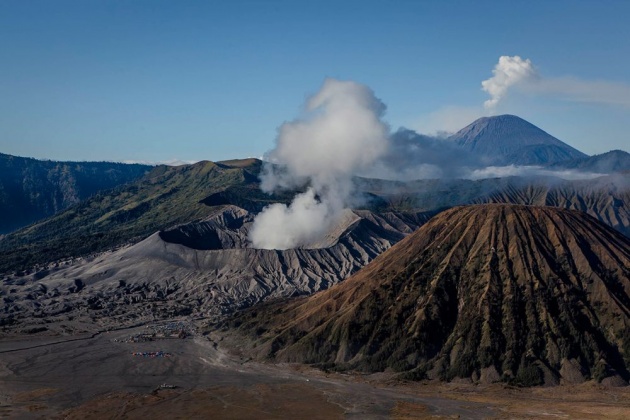 Further eruptions and the issuing of Aviation Ash advisories on 27 January and 28 January 2011 led to concerns being raised regarding a volcanic ash plume, reported to be drifting eastward toward the air corridors used to access the Ngurah Rai International Airport IATA:DPS in Bali. Airport official Sherly Yunita was reported at the time as stating that concerns about visibility had prompted Singapore Airlines, Jetstar-ValueAir, Air France-KLM, Virgin Blue and Cathay Pacific to cancel several flights to Bali, 340 km (211 mi) to the east. SilkAir also cancelled flights on the 27 January between Singapore and Lombok, an island to the east of Bali. The Volcanic Ash Advisory Centre in Darwin, Australia released several Code Red Aviation Ash Advisories pertaining to Mount Bromo (Tengger Caldera), on 27 January. They indicated that ash was observed at altitudes up to 18,000 ft (FL180) extending 200 nautical mi to the south east of the caldera. In other ash advisories of that day the cloud was reported as at times having a 10 km/h drift, both to the east, and to the south east.