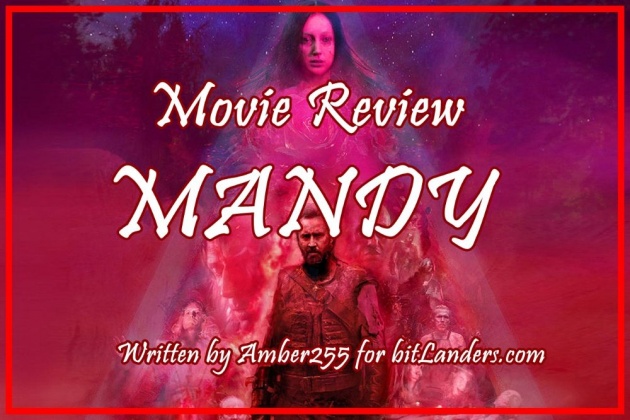 MANDY... This movie was not shown in our cinemas, but my good friend, knowing that I am a big fan of movies, invited me to the International Film Festival that was going in our city last year. It presented an unrestrained avalanche of psychedelic violence, dark humor, and political criticism that invades screens in the latest work by Panos Cosmatos MANDY. In the epicenter of this avalanche is Nicolas Cage, who has created a role filled with blood that left no one indifferent.

We can say that MANDY film is a creepy and bloody thriller about revenge that has gone too far. The picture was a stunning success with film critics at various genre film festivals and received rave reviews from the foreign press. And you can find it in IMDb list of 50 best movies of 2018 too.

It's bloody, it's nasty, and it burns.

For novice filmmaker Panos Kosmatos, this is just the second full-length work, where he continues to explore the subject of the so-called body horror, as in his debut film. Among the producers of the film are such cinema figures as Nate Bolotin and Daniel Noah.

What is art? Where is the invisible line between artistic delights and stupid trash? Why, in one case, the of the crushed intestines causes disgust, and in the other aesthetic pleasure. For what the film MANDY begin to be considered a cult, and why viewers and critics congratulate Nicolas Cage on his return to the big movie? Let's talk.

The Short Story Of the Movie

The story of this horror film unfolds in the 80s, in the countryside, where the local lumberjack Red Miller (Nicolas Cage), a lumberjack lives with the wonderful artist wife Mandy (Andrea Riseborough). Shady mountains, a sea of dense forest and a house near the crystal lake, this is a heavenly place to live.

However, their peaceful life suddenly turns into a real nightmare when a gang of real crazy demonic motorcycle riders comes to this quiet place. By sad coincidence, their leader, driving along the night highway, meets with Mandy by eyes who is going home. The head of the occultists liked woman so much that he decided to kidnap her and sacrifice her.

All the efforts of the couple are in vain, and Mandy is given to the ritual by burning alive in front of her helpless husband. Then the grieving woodcutter decides to take revenge on all those involved, takes any tools, including a chainsaw, and goes on a bloody warpath. There will be a lot of blood.

MANDY, first of all, gives the viewer a storm of emotions, phenomenal atmosphere, plunges into a psychedelic trance, and only then shows a terse story of revenge.

In general, the plot is as simple as possible. This film is clearly from the category of psychedelics: the narrative is as static as possible, but drugs addiction beats over the edge. In the first half, there is actually almost no dynamics, which is compensated by a consistent and unhurried immersion in the infernal atmosphere, framed by amazing technical tricks, about which later.

In fact, in this part of the cinema the viewer, who has not dissolved in the film's “climate” at the first hour of the movie, will simply become bored, uninteresting, and he will leave the session. But as soon as the equator is overcome, a real thrash happens: an angry, furious, and insane. Nicolas Cage begins great revenge. 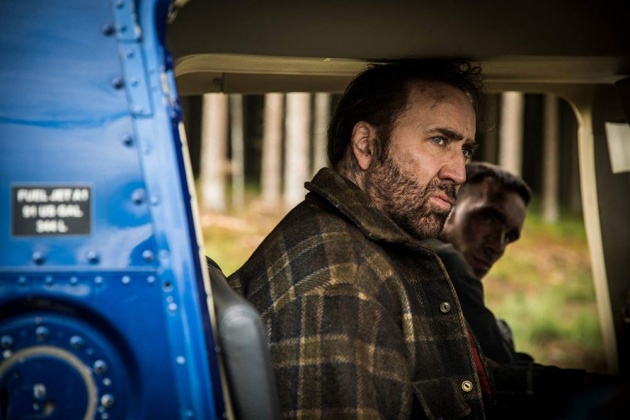 The boundary between reality and dream fades until the viewers are gradually incorporated into a hellish action that leaves less and less room for the logic of this world.

Frankly, it looked all cool, despite some obvious nonsense in the behavior of the characters. Fight on chain saws! Around the blood, corpses, cut heads - in general, what you may have lacked at the beginning, you will find it full developed further.

I am sure that Panos Kosmatos, to some extent, thanks to his father-director and his own interests, directed to the eighties, was able to realize an interesting project, and if someone doubts the veracity of my words, take a look at the director’s Instagram - there is a lot of interesting things, and the most interesting has nothing to do with modernity. The man stuck in that very time when there were no mobile phones, enthusiasm, and experiments were more important than commercial success. 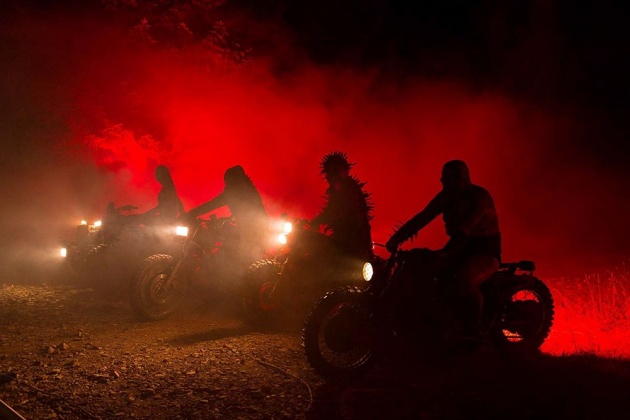 Panos Kosmatos is the enthusiast who takes on the mission of continuing that time, albeit in such a local vacuum. He did what he really wanted, and for that, I want to shake his hand.

As you can see, the plot is simple, there is schizophrenic evil, there is a fanatical evil, and there is one who is truly angry and decided to do away with all this. There is no place for good.

The picture is special in all its components; it is unique in its own way, and I think over time, the viewer will appreciate it. MANDY is that rare case when there will be no one indifferent; the audience will clearly split into two camps. Some will see a chic psychedelic piece, and even see a mockery of religion as a warning about the dangers of blind and uncomplaining faith, while others are overwhelming, calling the picture a failure filled with meaningless cruelty and nonsense.

The Personages Of the Movie

There is not any personages development which makes it impossible to memorize even their names.

In short, Nicolas Cage crumbles everybody with a crossbow, his ax, and other improvised means. There is even a duel on chain saws. Every time our hero is increasingly flooded with someone else's blood. And in one episode, a distraught widower even lights up a cigarette from a burning severed head. Well, he also kills the main degenerate with a special taste.

Nicolas Cage's character does not just suffer, he ends up in terrifying hell, stinking of the stench of devils and fanatics, and finds his way leading to the very devil. Red decides to go this way of pain and despair to the end, but what he will gain in the end?

Red Miller: [Before he smashes the cult leader's head with his bare hands] A psychotic drowns where the mystic swims. You're drowning. I'm swimming.

Andrea Riseborough brings a special silence to the portrait of her character. It’s a pity that MANDY is so underdeveloped that, it seems to me, even her removal would be beneficial: if about Red’s life partner were told more than she appears at the film, it would have a stronger effect.

It should be noted that, in addition to the crazed drug addicts and Cage, who distresses for the tragedy, there are three other rather amusing characters in this story. These are some demons or particularly sophisticated Satanists. 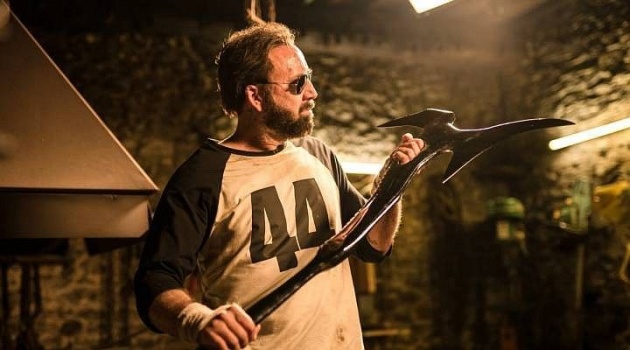 Of the hundreds of other revenge films, this one stands out with a unique cinema language and non-standard directorial vision. Great image. Great sound. Great presentation. A huge number of camera finds.

The highlight of the work was without exaggeration impeccable technical design.  Firstly, the most beautiful colors, responsible for half of the atmospheric filling: the background is always set organically and, most importantly, symbolically. Bright red saturated colors cause a hallucinogenic spectacle.

Secondly, the previously mentioned Johansson creates amazing things with music, and among the available tracks, I liked the track Starless from the band King Crimson.

Finally, the camera work is also great, which gives us not only beautiful frames of general plans but also pleases with inventive tricks when taking a close look at the actors.

A chic visual series, a special tempo of the narration, atmospheric music, all this gives the viewer a wide emotional color, conveys the feelings and sufferings of the main character. Masterful use of colors and music creates a hypnotic effect. In some places, the level of phantasmagoria rises to unprecedented heights. Particularly authentic is the narcotic ritual-trip of the occultists. The visual series, reaching its apogee, sometimes turns into animation, creating a movie myth step by step.

The Collective work Of The Actors

Nicolas Cage ... How much nostalgia in this name. I really liked and still like this actor: at the end of the 90s and the beginning of the 2000s, almost every his film was good, but then something went wrong. The last quality work for me in the lead role with Nicolas Cage was Knowing in 2009. And the subsequent sharp decline in career seems to be a surprise to everyone.

But at the start of last year, the Sundance festival happened, at which a new creation with the participation of Nicholas MANDY got a 100% rating from critics and exceptional delight. A lot of enthusiastic reviews promise him a triumphant return to the modern hall of fame of Hollywood stars. Nicolas Cage is a deep, thoughtful actor — look into his eyes. 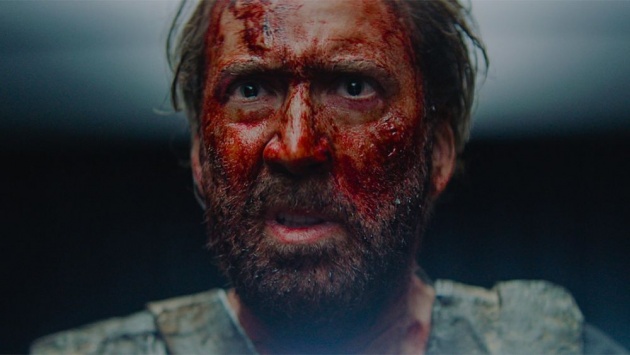 MANDY is as blatant as possible. On the edge and beyond. Nicolas Cage howls like a wolf - it’s hard to find an actor who could make it better. You will see everything: from the violent, raging emotional state to the peaceful, calm when one yes speak more than any words.

The bizarre-mysterious Andrea Riseborough copes with the images of her character too; she fascinates and at the same time scares. 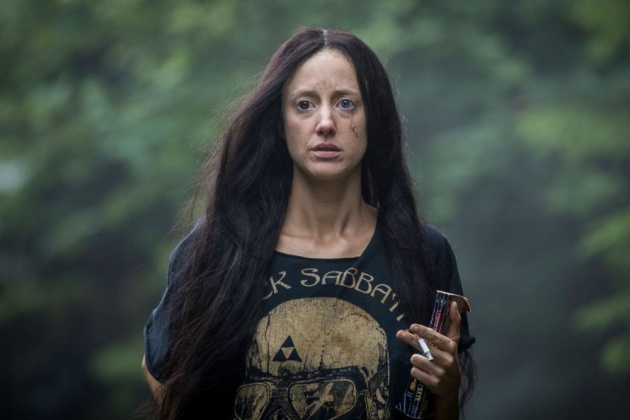 MANDY - besides the fact that this is an atmospheric art-house thriller, it is also the return of Nicholas Cage. A well-styled revenge film, which slowly draws the viewer into a bloody meat grinder, made by the demented Nicholas Cage. I initially doubted when critics praised him, but I really liked his game. Nothing superfluous, everything is measured.

Not everyone will like the seriousness, sometimes reaching the point of absurdity. But if you want to look at non-standard, bright, in the full sense of the word author's horror, this movie is definitely for you. The film, which is necessary to watch any fan of the genre, who wants to understand how a unique horror may look like today. 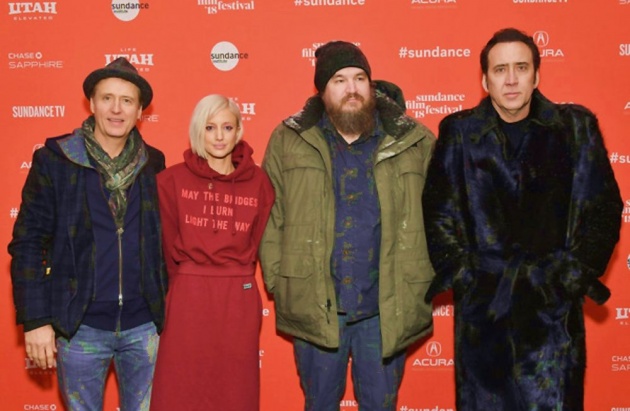 Panos Kosmatos made a stylish and laconic film with some cruel beauty and hypnotic effect. It is one of the most interesting movie experiences last year. A film is not for everyone, it is worth recognizing, but if you like the movie, it will undoubtedly fall into your favorite list.

MANDY is a piece of hell with a kind of religious background, which you will either hate or love: a bit prolonged, sometimes unjustifiably static, but specific horror dancer - I would recommend the viewer to watch it. Enjoy watching!

The story is simple but the atmosphere and tone definitely put it on another level. Nicolas Cage remembers how to do things well and adds another good film to his repertoire.