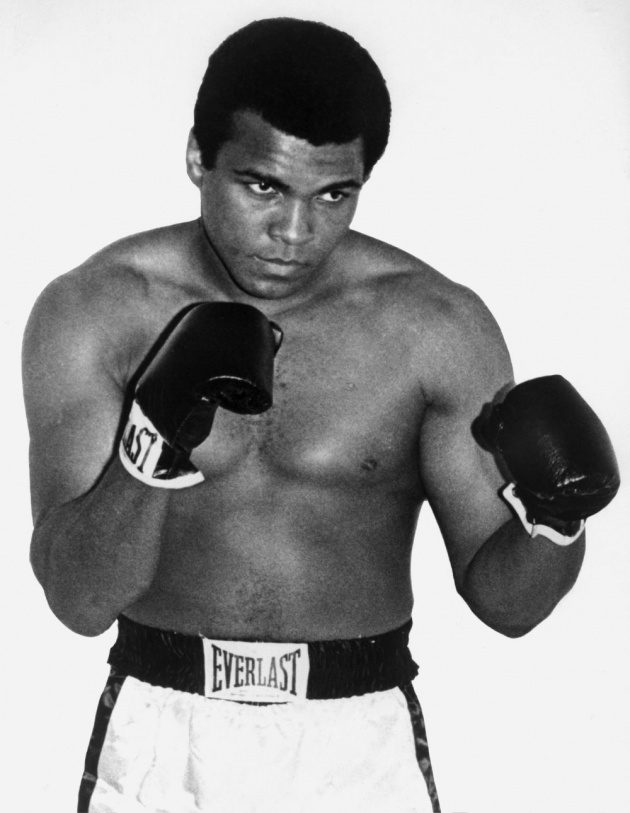 Boxing's most celebrated athlete, heavyweight champion Muhammad Ali was also known for his public stance against the Vietnam War and his longtime battle with Parkinson's disease.

Born Cassius Clay in Louisville, Kentucky, in 1942, Muhammad Ali became an Olympic gold medalist in 1960 and the world heavyweight boxing champion in 1964. Following his suspension for refusing military service, Ali reclaimed the heavyweight title two more times during the 1970s, winning famed bouts against Joe Frazier and George Foreman along the way. Diagnosed with Parkinson's disease in 1984, Ali devoted much of his time to philanthropy, earning the Presidential Medal of Freedom in 2005. He died on June 3, 2016, in Phoenix, Arizona. 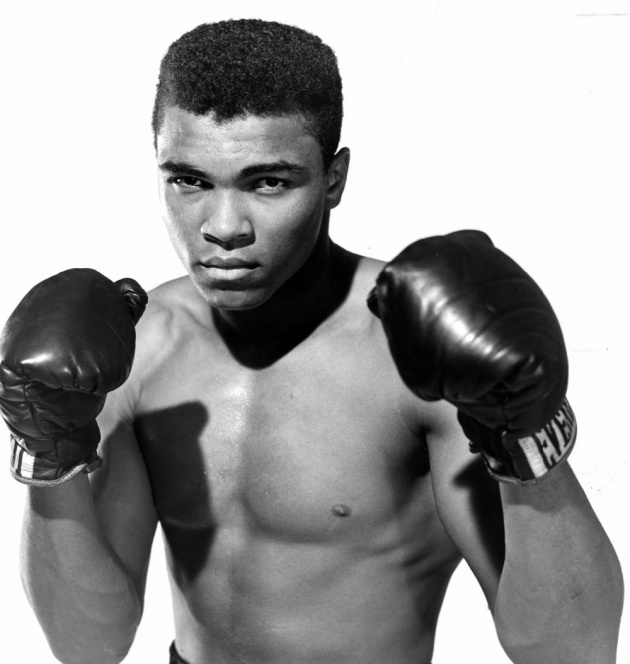 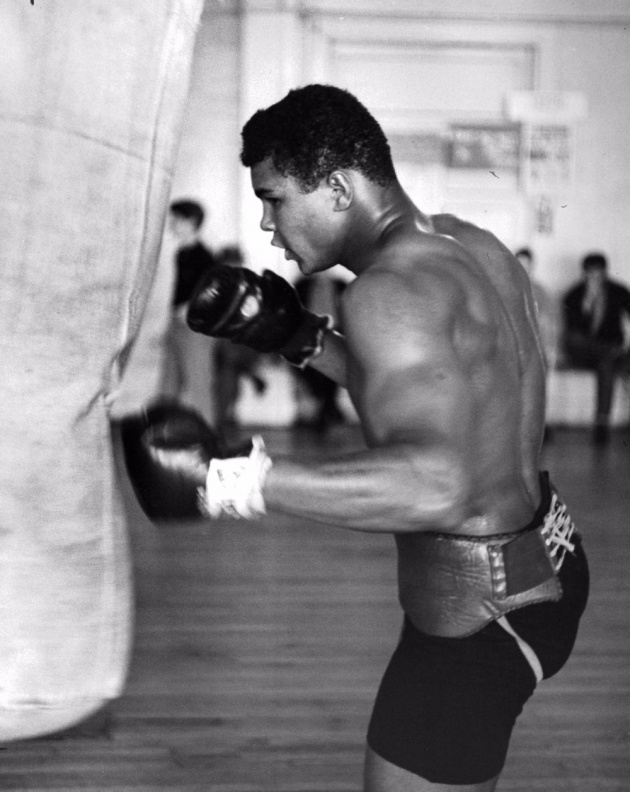 Boxer, philanthropist and social activist Muhammad Ali was born Cassius Marcellus Clay Jr. on January 17, 1942, in Louisville, Kentucky. Ali showed at an early age that he wasn't afraid of any bout—inside or outside of the ring. Growing up in the segregated South, he experienced racial prejudice and discrimination firsthand.

At the age of 12, Ali discovered his talent for boxing through an odd twist of fate. His bike was stolen, and Ali told a police officer, Joe Martin, that he wanted to beat up the thief. "Well, you better learn how to fight before you start challenging people," Martin reportedly told him at the time. In addition to being a police officer, Martin also trained young boxers at a local gym.

Ali started working with Martin to learn how to spar, and soon began his boxing career. In his first amateur bout in 1954, he won the fight by split decision. Ali went on to win the 1956 Golden Gloves tournament for novices in the light heavyweight class. Three years later, he won the National Golden Gloves Tournament of Champions, as well as the Amateur Athletic Union's national title for the light heavyweight division. 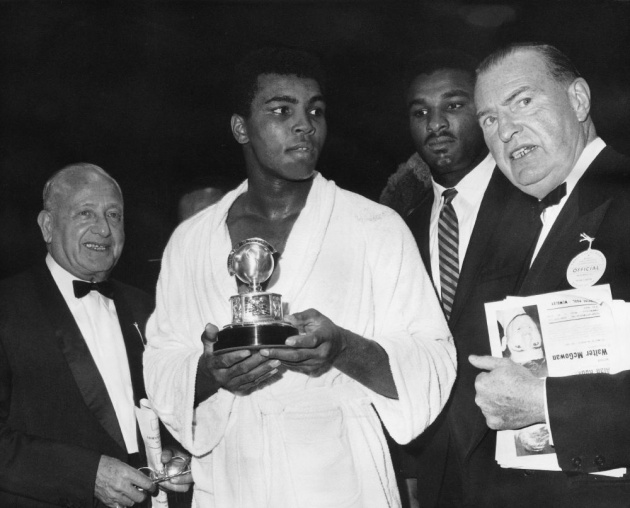 In 1960, Ali won a spot on the U.S. Olympic boxing team, and traveled to Rome, Italy, to compete. At 6' 3", Ali was an imposing figure in the ring, but he also became known for his lightning speed and fancy footwork. After winning his first three bouts, Ali defeated Zbigniew Pietrzkowski from Poland to win the light heavyweight gold medal.

After his Olympic victory, Ali was heralded as an American hero. He soon turned professional with the backing of the Louisville Sponsoring Group, and continued overwhelming all opponents in the ring. Ali took out British heavyweight champion Henry Cooper in 1963, and then knocked out Sonny Liston in 1964 to become the heavyweight champion of the world.

Often referring to himself as "the greatest," Ali was not afraid to sing his own praises. He was known for boasting about his skills before a fight and for his colorful descriptions and phrases. In one of his more famously quoted descriptions, Ali told reporters that he could "float like a butterfly, sting like a bee" in the boxing ring.

Conversion to Islam and Suspension 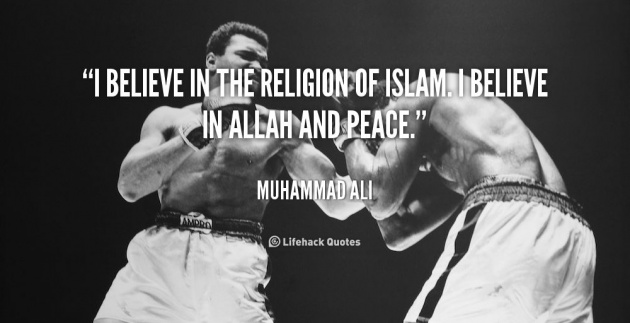 This bold public persona belied what was happening in Ali's personal life, however. He was doing some spiritual searching and decided to join the black Muslim group the Nation of Islam in 1964. At first he called himself "Cassius X" before settling on the name Muhammad Ali. (The boxer eventually converted to orthodox Islam during the 1970s.)

Ali later started a different kind of fight with his outspoken views against the Vietnam War. Drafted into the military in April 1967, he refused to serve on the grounds that he was a practicing Muslim minister with religious beliefs that prevented him from fighting. He was arrested for committing a felony and almost immediately stripped of his world title and boxing license.

The U.S. Department of Justice pursued a legal case against Ali, denying his claim for conscientious objector status. He was found guilty of violating Selective Service laws and sentenced to five years in prison in June 1967, but remained free while appealing his conviction. Unable to compete professionally in the meantime, Ali missed more than three prime years of his athletic career. The U.S. Supreme Court eventually overturned the conviction in June 1971. 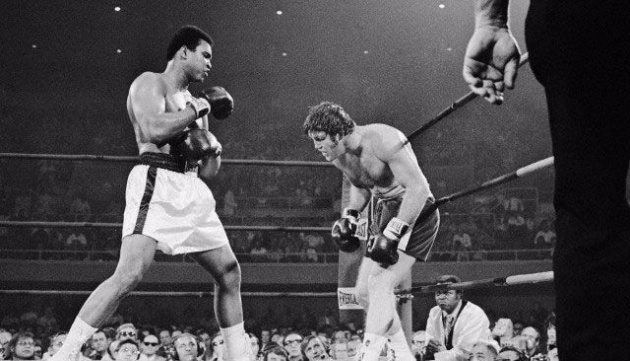 Prior to the Supreme Court's decision, Ali returned to the ring in 1970 with a win over Jerry Quarry. The following year, Ali took on Joe Frazier in what has been called the "Fight of the Century." Frazier and Ali went toe-to-toe for 14 rounds before Frazier dropped Ali with a vicious left hook in the 15th. Ali recovered quickly, but the judges awarded the decision to Frazier, handing Ali his first professional loss after 31 wins. Ali soon suffered a second loss, to Ken Norton, but he beat Frazier in a 1974 rematch.

Another legendary Ali fight, against undefeated heavyweight champion George Foreman, took place in 1974. Billed as the "Rumble in the Jungle," the bout was organized by promoter Don King and held in Kinshasa, Zaire. For once, Ali was seen as the underdog to the younger, massive Foreman, but he silenced his critics with a masterful performance. He baited Foreman into throwing wild punches with his "rope-a-dope" technique, before stunning his opponent with an eighth-round knockout to reclaim the heavyweight title.

Philanthropy and Diagnosis of Parkinson's 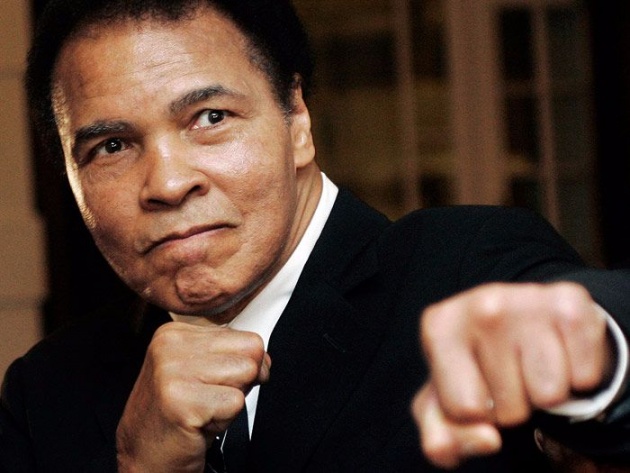 In his retirement, Ali devoted much of his time to philanthropy. He announced that he had Parkinson's disease in 1984, a degenerative neurological condition, and was involved in raising funds for the Muhammad Ali Parkinson Center in Phoenix, Arizona. Over the years, Ali also supported the Special Olympics and the Make-A-Wish Foundation, among other organizations. In 1996, he lit the Olympic cauldron at the Summer Olympic Games in Atlanta, an emotional moment in sports history.

Ali traveled to numerous countries, including Mexico and Morocco, to help out those in need. In 1998, he was chosen to be a United Nations Messenger of Peace because of his work in developing nations.

In 2005, Ali received the Presidential Medal of Freedom from President George W. Bush. He also opened the Muhammad Ali Center in his hometown of Louisville, Kentucky, that same year. "I am an ordinary man who worked hard to develop the talent I was given," he said. "Many fans wanted to build a museum to acknowledge my achievements. I wanted more than a building to house my memorabilia. I wanted a place that would inspire people to be the best that they could be at whatever they chose to do, and to encourage them to be respectful of one another."

Despite the progression of Parkinson's and the onset of spinal stenosis, Ali remained active in public life. He was on hand to celebrate the inauguration of the first African-American president in January 2009, when Barack Obamawas sworn into office. Soon after the inauguration, Ali received the President's Award from the NAACP for his public service efforts. 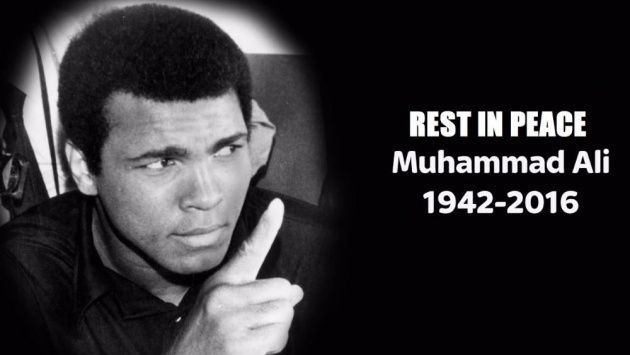 Things began taking a turn for the worse within a few years. In early 2015, Ali was hospitalized for a severe urinary tract infection after having battled pneumonia. He was hospitalized again in early June 2016 for what was reportedly a respiratory issue. The revered athlete passed away on the evening of June 3, 2016, at a Phoenix, Arizona facility.

Ali was survived by his fourth wife, Yolanda ("Lonnie"), whom he had been married to since 1986. The couple had one son, Asaad, and Ali had several children from previous relationships, including daughter Laila Ali, who followed in his footsteps by becoming a champion boxer.

Years before his passing, Ali had planned his own memorial services, saying he wanted to be “inclusive of everyone, where we give as many people an opportunity that want to pay their respects to me,” according to a family spokesman. The three-day event, which took place in Ali’s hometown of Louisville, Kentucky, included an “I Am Ali” festival of public arts, entertainment and educational offerings sponsored by the city, an Islamic prayer program and a memorial service.

Prior to the memorial service, a funeral procession traveled 20 miles through Louisville, past Ali’s childhood home, his high school, the first boxing gym where he trained and along Muhammad Ali Boulevard as tens of thousands of fans tossed flowers on his hearse and cheered his name. The champ’s memorial service was held at the KFC Yum Center arena with close to 20,000 people in attendance. Speakers included religious leaders from various faiths, Attallah Shabazz, Malcom X’s eldest daughter, broadcaster Bryant Gumbel, former President Bill Clinton, comedian Billy Crystal, Ali’s daughters Maryum and Rasheda and his widow Lonnie.

"Muhammad indicated that when the end came for him, he wanted us to use his life and his death as a teaching moment for young people, for his country and for the world," Lonnie said. "In effect, he wanted us to remind people who are suffering that he had seen the face of injustice. That he grew up during segregation, and that during his early life he was not free to be who he wanted to be. But he never became embittered enough to quit or to engage in violence. "

Former President Clinton spoke about how Ali found self-empowerment: "I think he decided, before he could possibly have worked it all out, and before fate and time could work their will on him, he decided he would not ever be disempowered. He decided that not his race nor his place, the expectations of others, positive, negative or otherwise would strip from him the power to write his own story. "

Crystal, who was a struggling comedian when he became friends with Ali, said of the boxing legend: “Ultimately, he became a silent messenger for peace, who taught us that life is best when you build bridges between people, not walls.” 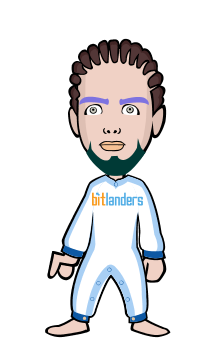