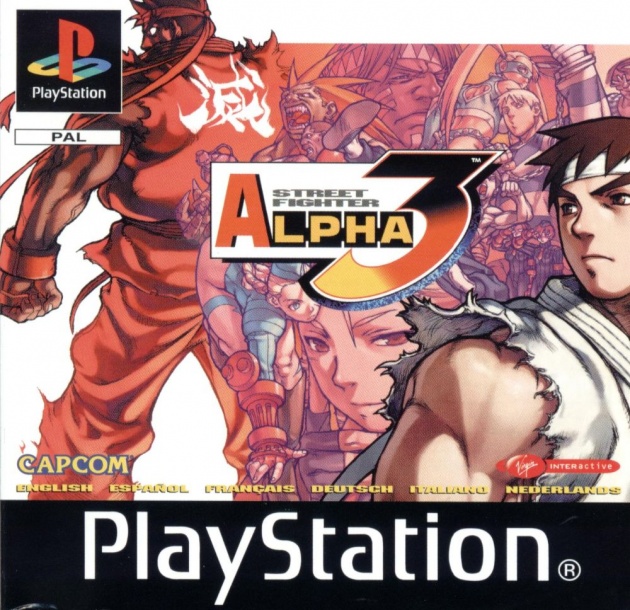 This game is probably my favorite 2D fighter of all time. It had just the right blend of speed and control. Not quite as hyper as the Versus series, but not as slow paced as some of the previous Street Fighter games were on their regular speed settings. Battles between friends, family, or the CPU controlled characters became elaborate chess battles of who could alpha-counter whom, when to execute your super art, and choosing the right moment to air guard.

I played this game in the arcade around that great period of when Tekken 3, Rival Schools, and even Street Fighter 3 were released. And though it was hard sometimes to go back and forth between the different art styles of each game (SF3 looked like you were playing an anime movie whereas SFA3 had more a TV anime type look) once you got going in the game it was extremely difficult to put down. Especially when it came time for its home release on the PS1. The most fun I had with the game was the World Tour mode where you could build up your chosen fighter's attack strength by completing a series of increasingly difficult challenges.

My best fighters were Fei Long and Cammy. I was so glad to use Fei Long again, who had not been seen since some years earlier in his debut game, Super Street Fighter 2: The New Challengers. :D

All right, that's enough of my review of the game. Time to find out which of the music themes from the game that I liked in particular!

First of all, it's got to be said that this game has one of the best opening themes in any fighting game I've ever played. It gets you pumped for action and ready to kick some serious butt!

This theme kind of always goes through my mind whenever I'm getting ready to take on a new challenge in life. It's that inspirational. ;)

Next up is Ryu's theme. Though it's a bit different from his classic theme song first heard in SF2, it really puts you into the mindset that this is a young warrior who's only purpose in life is to test his fighting skills, grow as a fighter, and seek the next challenge whether his fight ends in a won, loss, or a draw. It's just a great battle theme overall and is such a standout piece of music from the entire SFA3 soundtrack!

Next up is Chun Li's theme, which has the excellent title of being called Resolution. I suppose it's derived from her resolute sense of determination to hunt down and destroy M. Bison and Shadaloo (I much liked the name Shadow Law from the SF2 Animated Movie, but I digress) for what they did to her father and indeed much of the world. It really fits with her character, the stage her character fights in (which is a courtyard filled with other martial arts practitioners) and is kind of a very chill sort of song to listen to if you're trying to concentrate. I've never mastered Chun Li's character within the game itself, but I always liked her look and her story.

So now we have Sagat's theme, which is just extremely cool sounding. The beat immediately gets your head nodding and you can totally place your mind into the point of view of this hulking fighter. As far as Sagat goes in being Ryu's rival, I place him slightly above Ken and slightly below Akuma/Gouki in terms of his importance. Whereas Ken is more like Ryu's brother, and Akuma wants to corrupt Ryu from the inside out, Sagat plays into the category of just wanting to beat Ryu for (1) taking his honor as a Muy Thai champion and (2) leaving that rather iconic scar across his chest. What was cool in SFA3 was that just before Sagat would do battle, sometimes his chest scar would glow. I thought that was pretty neat for Capcom to put into the game to add just an extra layer of character to Sagat.

And the winner for one of the more twisted themes I've ever heard in a fighting game goes to Vega/Balrog's theme! Just the way it starts out, it sounds like you're about to fight a psychopath. It really fits in with Vega's character as a guy who takes just a bit too much delight in bleeding and slashing his opponents. Not to mention it just sounds so oddly cool. Any song that can make me feel all of these things all at once while listening to it is definitely worth a mention! Was never really a fan of Vega's character in terms of usability in a game, but man, this track...so awesome!

This theme is just cool. Thankfully it has a noticeably different drumbeat from many of the songs in SFA3 (seriously, while the melodies themselves are cool, whomever the composer was on SFA3 got a tad bit lazy when it came to adding a variety of drumbeats for each of the fighters) and it really fits in with Karin's character as being this bratty rich kid who has a bit of a rivalry with Sakura. Karin reminded me a lot of Cammy in that she was a very quick but physical based fighter. She couldn't spam energy blasts, she's just very good at punching or kicking your character's face in. I really wish Capcom would have brought her back for SF4...but hey, at least there's always hope for SF5!

I originally wasn't going to include this in my extravaganza but after hearing it again I remembered just how much I liked it. It really fits in with how tragic the plight is of the Cammy clones, which Juni and Juli are apart of, and how cruel Bison is to have them made for his own dark purposes. One of the more emotional themes in SFA3's soundtrack, and a real gem in the collection.

Which leads into the second to last pick of my collection here. THIS is how you do final boss music in a fighting game. Both parts visceral and action packed, this song makes you feel like you are fighting for the fate of the world. Or to just let you know that you've reached the end of the game, haha. I enjoyed how in SFA3 that Bison was the final boss again, whereas in SFA2 every character had their own personal final character to fight. It was a nice change of pace for the time, but this felt much more in line with the original SF2 in which if you wanted to finish the game, you had to go through Bison. And holy crap, was this version of Bison ever hard to deal with. If you want to get an idea of how difficult he was, check out Maximilian Dood's Boss Rage video on just how difficult it was to beat Bison!

All right and finally we come to my favorite track in all of SFA3, the one I've played perhaps more than any other just for my own personal enjoyment...Daybreak, the ending theme!

Next to Tekken 5's ending theme, this is one of the best enders in all of fighting games. It makes you feel like you just accomplished an impossible goal and that you have really triumphed in life. In reality, all you've actually done is defeat a very difficult video game boss, but still, the feeling of relief and glory that comes from hearing this theme, it really makes you get into the feeling of the game. And personally, I just enjoy listening to it on its own as a very uplifting and positive piece of music. Yes it uses that very familiar drumbeat that is ever present in many of the stage songs from the other fighters, but its slowed down to such a methodical pace that it goes along with the melody being played rather than crashing against it. I love this theme and feel glad to play it again and again when things are going good for me in life in general.

And so there you have it, my SFA3 Extravaganza! I thought this was quite fun just quickly covering these songs, the characters whom they belong to and just the game itself. SFA3 was and still is one of the best fighting games I've played and I hope I've conveyed to you, the reader, just how much I enjoyed it. Thanks for reading, thanks be to Capcom for making this wonderful game, and I'll come back next time with more of my favorite themes in gaming!