Well lets start with how I woke up. Normally I just kind of wake up since it's vacation. However, my family was going to a big gun show and later visiting my cousins, so I had to wake up a little earlier than normal. Well I didn't set an alarm because I didn't know when I would need to get up. So my brother woke me up. How did he do it? I'll break it down step by step.

1. open the door and walk into doorway.

3. as subject is regaining conciousness, turn on the room light and sing the high notes "AAAA-WEEEEE EEE EEE EE E We Um Bumbwe"

Now that is an interesting way to wake up. I still laugh thinking about it.

So after waking up and getting out the door, we drive for an hour and get to Gibraltar Trade Center. This was where the gun show was held. Now Gibralter is basically this giant flee market. There are vendors selling all sorts of things; weapons, toys, videogames, war memorabilia, clothing, furniture, movies, if you can think it there's probably a vendor selling it. They also have shows every now and then. This time it was a gun show. We looked around, oogled at some guns, and enjoyed the manliness. One thing I found was this. 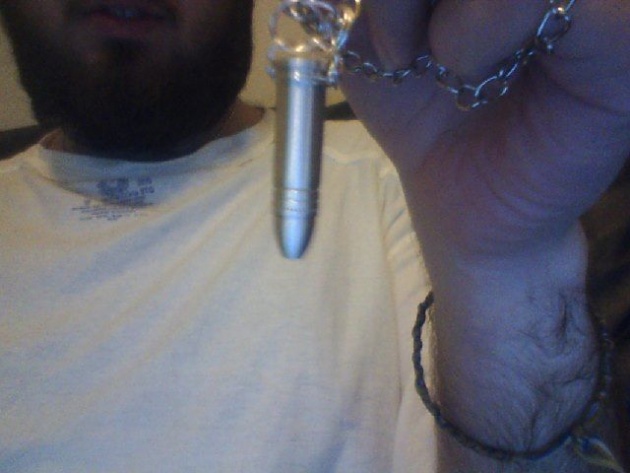 That right there is a necklace with a 1/4 ounce silver bullet. It's not a real bullet, just a 1/4 ounce of solid silver in the shape of a 22 caliber round. I really like it. After enjoying the gun show, the "traveling flee market" stands were right next to it. These aren't permanent stands, these are people that go from flee market to flee market, and if it was outside, their RV and trailer would be parked right behind the stand. I look around, and I find this bad boy. 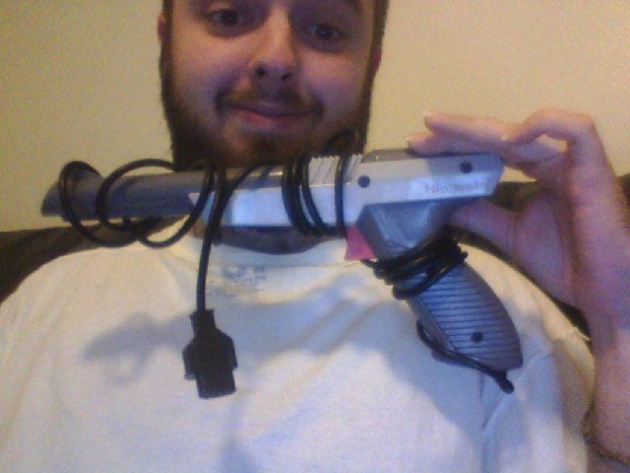 That right there, is a gray NES Zapper. Here's a little history, this is the first run zapper. They were gray, but because they looked to much like a real gun, Nintendo changed them to orange so they were less real looking. The orange zappers are far more common. The guy that was selling this said $7.I was ready to haggle, but the guy told me that he normally sells them for $10 but because I was wearing the safety yellow jacket, he'll sell it for $7. That was a good price, and considering that the gray zappers on ebay go for about $10 plus shipping, it was worth it. Unfortunately I wasn't able to look around at all the other venders, but I could spend all day looking around Gibralter, and we had to go see my cousins.

After about another hour, we arrive at my cousins. My aunt greets us and invites us in. We say hello. My brother and dad went to see my uncle's shop to see what he works on. I stayed back and hung out with my cousin. We tested out my zapper. It works. After that, we played Super Mario Bros 3. It was fun playing with someone who was good, because my brother and I used to play it all the time when we were little. However, I was good and he wasn't, so I would beat all the levels and he would get all the items. Fair, I know. We made it up to world 5, though I will admit that we did use a warp flute, but hey, that was good. Once my dad, brother, and uncle returned, we stopped and ate pizza. After dinner, we played trivial pursuit, kids vs adults. Well, 1 generation vs the other. We're all above 18 so we're all adults. The older generation won, but we gave them a run for their money. Since this is kind of a mix between full adventure and normal daily blog, this has been Pokematic, and Later.

IMAGE CREDIT:GellingerViaPixabay Hello guys! The topic of the blog is trade. Trade is an activity of…

The Biggest Trading Comodity of all Times - Is TIME

Right so we all know that if we want to attain something, we need to trade for it - in some way or a…

What is Commerce? What are it's advantages?