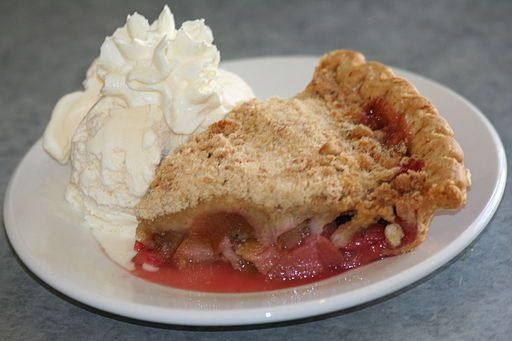 Rhubarb has been cultivated by the Chinese for thousands of years for medicinal purposes. The plant grows from a rhizome, and the leaf stalks are thick and crunchy, similar in texture to celery. The stalks by themselves have a fairly tart taste naturally, although commercially grown rhubarb, often cultivated indoors, these days is usually sweeter than that grown normally outside. The earliest recorded use of rhubarb as a food is much more recent, dating back to 17th century England, as sugar became more widely available, and cheaper - without the sugar, rhubarb can be a bit too tart.

When making a rhubarb pie, the stalks are cut into short pieces and stewed in boiling water, with sugar added, until they are soft. The resulting cooked rhubarb can then be added to a pie case. Sometimes apples are included in the pie to counteract the tartness of the rhubarb, rather than just using sugar.

Image: By Jonathunder (Own work) [GFDL 1.2 (www.gnu.org/licenses/old-licenses/fdl-1.2.html)], via Wikimedia Commons

Today, August 20th, is National Chocolate Pecan Pie Day. Pecan pie is a popular dish in the US, espe…

How to Make an Apple Pie

Apple pie is an all around favorite. This popular dessert is eaten on holidays, during special event…

Enjoy his apple crumble pie at home. this recipe is the courtesy of Joy Kitchen…