NBA CARES AND BASKETBALL: MORE THAN A SPORT AND RECREATION

Before anything else, I’d first like to take this chance to say this is the first ever blog post I will be making in Bitlanders. That would’ve sounded unnecessary but to add more to it, I’d also like to proudly say I am a newbie here! Now this introduction sounds more necessary.

Yes, I am a newbie in Bitlanders. And when I found out about this through a friend, he immediately recommended that I participate in creating a blog post which might get me through a chance to earn double rewards. DOUBLE REWARDS. I believe, nobody does not like rewards. What more double the rewards?

SURVEY CHAT ASKS: WHAT IS YOUR FAVORITE SPORT?

I chose to participate in “Sports and Social Good” topic for my debut blog post. After a short greeting from the survey chat, it drops a very difficult question both a sport enthusiast and a non-enthusiast could ever think of. “What is your favorite sport?” And I only get to choose among: American Football, Cricket, and Basketball.

I never thought it could be this hard, to be a sport non-ethusiast… But instead of crying my eyes off and ditching the survey chat, I just went for the one I am most familiar with and most exposed to. Yeah, odd one out until I am left with only one choice! And I was left with BASKETBALL. *laughs*

But on a more serious note, I didn’t jokingly choose basketball. Yes, I wouldn’t have chosen it given I had more choices like table tennis, badminton or volleyball. Those are the ones I play casually. But unluckily those were nowhere the options. And the only thing I know among the options is basketball.

I’ve never played basketball in my entire life. BUT I have often watched local and international games on TV for about 4 or 5 years now, to which I am very happy that survey chat asked me about too. I’m able to justify this right!

But on a more serious note, I didn’t jokingly choose basketball. Yes, I wouldn’t have chosen it given I had more choices like table tennis, badminton or volleyball. Those are the ones I play casually. But unluckily those were nowhere the options. And the only thing I know among the options is basketball.

I’ve never played basketball in my entire life. BUT I have often watched local and international games on TV for about 4 or 5 years now, to which I am very happy that survey chat asked me about too. I’m able to justify this right!

Try asking ten kids, ten teenagers or ten adults here in the Philippines if they play basketball. Most probably, if not all of them, at least eight or nine out of them will answer “yes”.

Growing as a kid who loved outdoor games, I was very aware how much kids of my age loved playing basketball very much. Not just that, even those who I regard to as “kuyas” (brothers) were so addicted to it. Oh, even the uncles were so delighted in it. Indeed, this could be the top favorite sports of Filipinos! Need I have to provide more evidence?

Well, I might just as well start by describing how interesting our local basketball is to me. In my very honest and unbiased opinion, I will say PBA (Philippine’s own version of NBA) is really interesting to (somewhat) very interesting. Although the survey chat itself does not require justification, I will still elaborate on my answer here.

I have no plans on playing basketball in the near future. It’s just something I am not into doing. I won’t get to the gender thing. I won’t go there. Since I know many female friends way back in high school who were really into basketball. But what really makes me consider PBA interesting is its capability to draw thousands (or even millions?) of fans nationwide to focus to their TVs for a few hours and watch. More than that, these fans are screaming, cheering and jumping from their seats from time to time. I’m talking about both TV viewers and game venue viewers.

Okay, but that’s very much similar to what happens during other sports as well, right?

Yes, that’s true! But what makes me think it’s somewhat very interesting, something that is somehow different from other sports, is that it can draw so much non-fans and make them get along with the fever as well. I won’t start with bandwagon issues and stuff. I don’t even think it’s something ugly. I consider it magical actually… when one person is not so much into something and suddenly becomes so into it because it is very popular… even to the point of betting so much money into it. (But of course, to lose that money is unfortunate *laughs*)

This is pretty similar to how I see NBA games too. It’s just that viewers are just in their homes, in front of their TV, screaming like the sound waves could have reached US and the exact location where the game currently takes place. Plus the fact that it has somehow more intense fever since it has wider coverage.

In NBA’s case, I answered survey chat with “interesting”. I was just very honest. I don’t really feel like saying it is really very interesting being the sport non-enthusiast me. Although if there was “interesting to somewhat very interesting” in the option too I would choose that. I value the meaning of “somewhat”. Talk about accuracy!

Funny. This topic is just so timely. NBA Finals hasn’t ended yet and its fever is like all over everyone right now in the Philippines. And it happens every single time… or so I could say since I have put my attention to it some four or five years ago.

“Have you ever heard of NBA Cares?” survey chat asked. And I swear at this point my boredom died. Wait, what was that? NBA what?

I immediately searched through google what NBA Cares is. Of course I’ve always been honest all throughout the survey, so I answered “no”. Plus I don’t see the point of lying now. Then survey chat just posted a short info about NBA Cares but I was not able to pay too much attention with it as I was already browsing the NBA cares website.

What is NBA Cares?

According to its official website, “NBA Cares is the league’s global social responsibility program that builds on the NBA’s mission of addressing important social issues.”  This does not only include its resident country, the United States, but also the entire world.

To not spoil the beauty of its mission, I won’t be paraphrasing it but instead quote it. See how heartwarming and beautiful this program is.

This season, as part of the 10th anniversary of its creation, NBA Cares is renewing its commitment to communities around the world by inspiring play and teaching basketball’s values to more than 15 million youth, providing an additional 3 million hours of service to others, and leaving a lasting legacy in communities by building 1,000 more safe places to live, learn or play by 2025.

Now, if one thinks NBA is just a mere league or association, read this and think again.

This is a program aiming to honor both active and retired service men and women and their families through collaborative effort of NBA, its teams and players, and different military organizations, including Department of Defense and USO.

Teams and their current and former players are partnering with local installations and a variety of military and veteran-serving organizations for several activities, including leadership seminars, community service events and basketball-focused fitness activities for active and retired service members and their families. 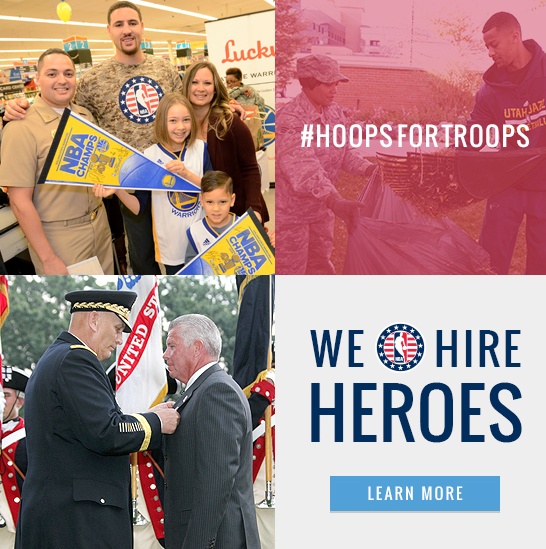 President Barack Obama and the White House launched this multi-sector effort to help young ones pursue their journey to success through building education, providing mentor, and generate job opportunities to the underserved communities. NBA committed to support the program in partnership with MENTOR.

NBA designed this program to give honor, every year, to an athlete who showcases a great passion to give back to his community. Through this award, an athlete is recognized for his outstanding efforts in the community, through philanthropic and charitable works.

This program aims to promote both social and physical health and fitness to everyone, through being active, eating healthy and playing together.

The NBA collaborated with Green Sports Alliance to promote awareness and raise funds for protecting the environment.

The NBA is taking steps to be more environmentally friendly and will continue to explore ways of reducing its impact on the environment through community outreach programs, generating awareness among fans and greening its operations.

Through this initiative, the NBA encourages its fans and supporters to promote the idea of giving back to their respective communities by taking it to social media. With this, its concept of “season of giving” will reach larger audience. 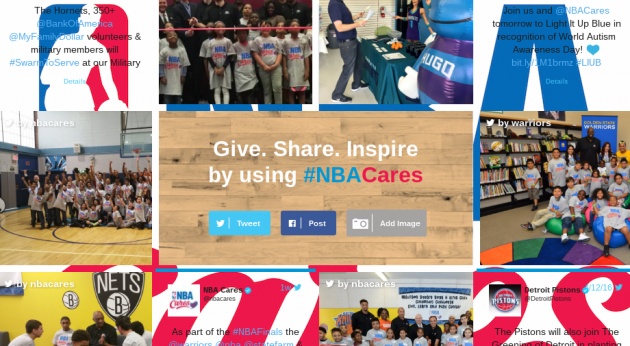 There was one question asked by survey chat somewhere in the last parts of the survey. It goes like “how can a sports star give back to his community?” Again, I was given choices to which I can even barely choose, mainly because all of them were correct and none were wrong: Education. Empowerment. Leadership.

I was like, where was the last option? All of the above!

However, I needed to select only one, and after thorough analysis and deep thinking, I eventually selected “empowerment”.

For someone who does not find extreme delight in playing or watching sports, it will be hard to maintain high regards for it. Being not so much into sports allowed me to look at it through another perspective to which I am able to say to myself, “yes, this is why I love sports!” without being totally engaged to it. Seeing athletes, top rank or not, inspiring people, especially young ones, to get through life, to do good and do better, by playing sports is such a gem. Initiating good change through powerful influence, I have witnessed, has been really useful in improving communities. Empowering people, of all ages and genders and races, through sports is definitely effective.

This is what’s truly great and amazing about sports, including basketball. The community gets its dose of physical and emotional enjoyment while necessarily benefiting from its great social influence.

Thank you for taking time to read my first ever blog post! Feel free to react. See you around!