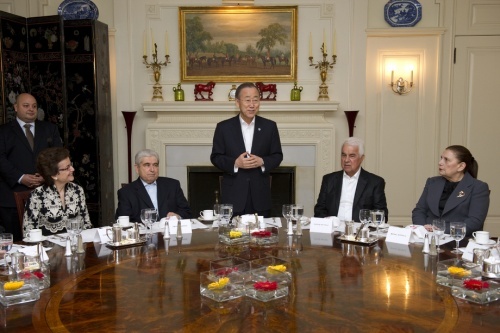 By look of Photo – needs more “bonding”! Someone must have called it Turkish instead of Greek Coffee or perhaps Greek instead of Turkish baklava to follow at dinner hosted by UN Secretary General Ban Ki-moon? There are two days of UN facilitated talks on reunifying the divided island nation coming. Frankly more progress has been anticipated for some time, but no resolution yet. This is the 5th time that the UNSG is present at talks between Greek Cypriot leader Dimitris Christofias and his Turkish Cypriot counterpart, Dervis Eroglu. They continue the negotiations begun in 2008. Talks will be held at the Greentree Estate on Long Island. See Film Report –“Cyprus New Impetus?”- diplomaticallyincorrect.org/films/movie/cyprus-new-impetus/24324 According to UN Press Centre Press release, the “UN-facilitated talks are aimed eventually setting up a federal government with a single international personality in a bi-zonal, bi-communal country, with Greek Cypriot and Turkish Cypriot constituent states of equal status.” Photo Above Courtesy of UN Photo: Secretary-General Ban Ki-moon (standing) speaks at a meeting with the Greek Cypriot and Turkish Cypriot leadership at Greentree Estate in Manhasset, New York. Pictured with him (seated, from left) are Elsie Chiratou, wife of Greek Cypriot Leader Demetris Christofias; Mr. Christofias; Derviş Eroğlu, Turkish Cypriot Leader; and his wife, Meral Eroğlu. By Ambassador Muhamed Sacirbey Facebook – Become a Fan at “Diplomatically Incorrect” Twitter – Follow us at DiplomaticallyX Twitter - Follow mo @MuhamedSacirbey Below is Our Article from last Summer – has Anything changed? The leaders of the Greek Cypriot and Turkish Cypriot communities today held the first of 19 intensive, all-day, United Nations-supported meetings aimed at reunifying the island. The meeting between Greek Cypriot leader Dimitris Christofias and his Turkish Cypriot counterpart, Dervis Eroglu, “took place in a positive atmosphere,” said Special Representative of the Secretary-General Lisa M. Buttenheim. The first four meetings, at the headquarters of the UN Peacekeeping Force in Cyprus (UNFICYP), were devoted to governance and power-sharing, said Ms. Buttenheim, who heads the mission. (From UN News Centre Sources). Both parties earlier this month accepted an offer from Secretary-General Ban Ki-moon for an enhanced UN mediation role in the talks aimed at achieving a united Cyprus. Mr. Ban said at the time he expected both sides to reach convergence on core issues by October. “I stated to Mr. Christofias and Mr. Eroglu that while I agreed that the negotiations must be Cypriot-led and Cypriot-owned, I was prepared to offer an enhanced United Nations involvement, without prejudice to this central principle,” Mr. Ban had stated. Objective Reunified “Federal Government” for All Cyprus: The UN has been facilitating talks between the Greek Cypriot and Turkish Cypriot leadership with a view to the eventual establishment of a federal government with a single international personality, consisting of a Turkish Cypriot Constituent State and a Greek Cypriot Constituent State, each of equal status. UNFICYP, which has been deployed on the island since 1964, currently has nearly 1,000 uniformed personnel and 150 international and national civilian staff. The Security Council extended the mission’s mandate last month for another six months and urged the leadership of the Greek Cypriot and the Turkish Cypriot communities to accelerate the pace of their talks. LAST FILM REPORT – “Cyprus Needs Push” - diplomaticallyincorrect.org/films/movie/cyprus-needs-push/27680