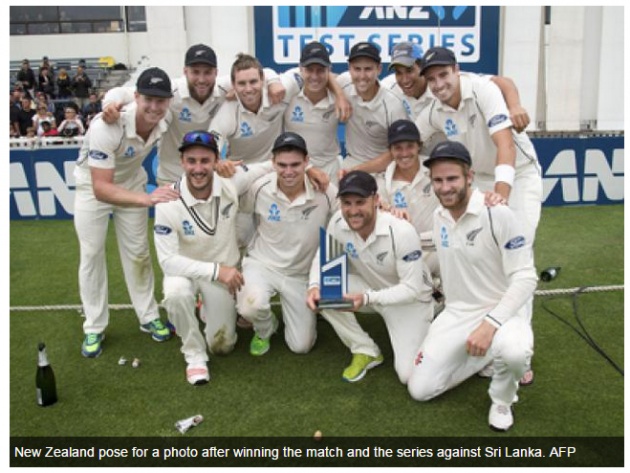 New Zealand recovered from first innings turmoil to beat Sri Lanka by 193 runs in the second Test in Wellington Wednesday and record a 2-0 victory in the two-match series.

It gave the home side a vital confidence boost ahead of the one-day World Cup beginning next month in New Zealand and Australia as Sri Lanka, set a target of 390, were all out for 196.

After the tourists started the final day at 45 for one, fast bowlers Trent Boult and Doug Bracewell tore through the top order with four wickets in the morning, including master batsman Kumar Sangakkara, before the wearing wicket played into the hands of spinner Mark Craig.

Craig took four for 53 with three of the wickets coming after lunch, including Dinesh Chandimal and Rangana Herath in successive balls

Sri Lanka had two options for the final day -- play for a face-saving draw after commanding the first half of the Test, or play for a win to save the series.

Faint hopes of a remarkable win vanished early when Boult removed nightwatchman Dhammika Prasad for six before continuing his dominance of Sangakkara to dismiss the Sri Lankan legend for five.

Sangakkara, who set up Sri Lanka's 135-run first innings lead with his majestic 203, had reason to feel disappointed with his cheap dismissal in the second innings.

The initial appeal for caught behind, not supported by wicketkeeper BJ Watling, was turned down.

However, New Zealand captain Brendon McCullum sought a review and it took multiple replays before the third umpire Bruce Oxenford of Australia was convinced the technology showed there was the faintest nick.

Bracewell continued the attack with the crucial wicket of Kaushal Silva for 50 and then Angelo Mathews for eight.

Mathews was well caught one-handed by a diving Kane Williamson in the gully.

Williamson was back in action to partner Craig in the dismissal of Prasanna Jayawardene for 10.

Craig had Dinesh Chandimal caught behind by Watling and trapped Rangana Herath in front.

Bracewell celebrated his recall to the New Zealand team after 14 months in the wilderness with two for 25 and ran out Suranga Lakmal for six.