Some 200 members of the Boko Haram Islamist militant group have given themselves up, in the biggest such surrender, Nigeria's army says.

The fighters are said to have handed themselves over in the town of Banki on the border with Cameroon.

The military earlier said the town had been recaptured from Boko Haram but there is no independent confirmation.

Some 17,000 people are said to have been killed in the six-year insurgency, mainly in northern Nigeria.

BBC Nigeria correspondent Will Ross says dozens of Boko Haram fighters have given themselves up in recent weeks but this would be the largest group by far to have surrendered en masse.

An army spokesman told the BBC they would all be screened to determine their status and they would then go through the government's de-radicalisation programme. But he added the justice system would take its course.

The military is optimistic that the extremist group will be defeated in the coming weeks.

But our correspondent notes that exactly a year ago, the military said two groups of more than 100 Boko Haram fighters had surrendered. That was then followed by the most violent stage of the conflict as towns and villages were taken over and thousands of civilians were killed. 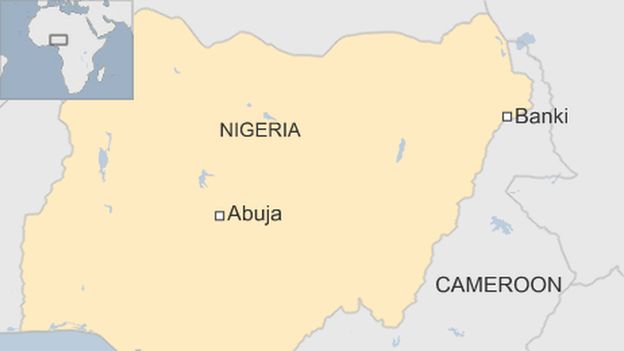 This year the security forces have reclaimed most of the territory previously captured by Boko Haram.

The army has also freed a number of people kidnapped by the militant group and this week announced that 241 women and children had been rescued near the border with Cameroon.

Attacks by the Islamist group have intensified since Muhammadu Buhari became president in May, after winning elections.

Boko Haram at a glance: