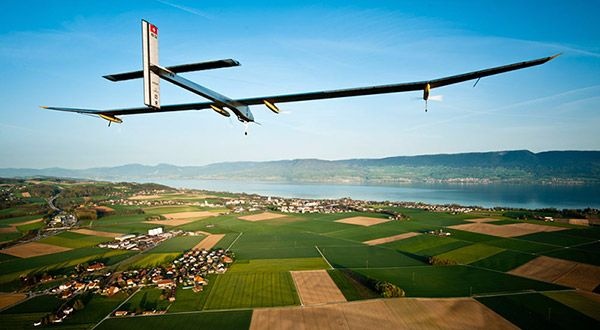 Fueled solely by the sun, the Solar Impulse 2 has completed the second leg of its historic journey around the world, landing in Ahmedabad, India. A decade-old dream is actualizing for the team.

The solar plane began its historic flight in Abu Dhabi on Monday and landed early Tuesday at Muscat, Oman. The second leg took 15 hours, with the Solar Impulse 2 flying across the Arabian Sea and arriving late Tuesday night in Ahmedabad.

The entire trip, consisting of 11 stops, will take about five months to complete. Total flight time is estimated to be approximately 25 days.

Along the way, the Solar Impulse 2 will make stops in several cities in the U.S. and China. Its itinerary isn't completely mapped out, as stops in North Africa or Southern Europe are still tentative.

The Solar Impulse 2 was dreamed up by cofounders Bertrand Piccard and André Borschberg, and the two-man team is piloting the aircraft on its epic journey. The solar plane has been receiving the support of a team of air traffic controllers, ground crew, and the partner organization that helped conceive and launch the mission.

Piccard and André first began tinkering with the idea of a round-the-world solar flight in 2003. The next year,Solvay, a chemical firm in Belgium, threw its weight behind the project.

While the Solar Impulse mission received the support of three other major partners -- Omega, Schindler and ABB -- Solvay takes pride in being the first "historical supporter" of the solar plane as it soars around the world and into record books.

"This project was only a vision at that time -- there was no team, no design, no technology," noted Solvay spokesperson Lamia Narcisse.

"Why that? Because we knew that chemistry had a key role to play to make this happen," she told TechNewsWorld. "With our research and innovation, we have demonstrated that chemistry indeed is critical in the development of low carbon technologies."

Solvay contributed to the solar plane's development in two areas. The first was streamlining the design to achieve a lighter build, Narcisse said. The second area was "energy capture, storage and optimization."

The mission's success is now in the hands of the pilots and cofounders, but Solvay is leading the cheers and evangelizing the project's message.

"After the development of products and solutions for the plane, we are now accompanying Solar Impulse in their round-the-world tour as an ambassador," said Narcisse. "We convey their messages to our stakeholders, thanks to specific events that we organize in India, China, the U.S. and Europe."

The Viability of Solar

So far, the solar Impulse 2's flight has been a success. Each successfully completed leg is a victory for renewable energy, but even if problems should occur along the way, that wouln't change the viability of solar, said MJ Shiao, director of solar research at GTM Research.

"From our perspective, solar has proven itself to be a technically viable source of electricity generation," he told TechNewsWorld.

"While some might view setbacks for Solar Impulse 2 as a case against solar, I would point to the millions of solar PV systems in operation -- powering homes, businesses and electricity grids globally -- as a better test bed for the viability of solar," Shiao said.

The Solar Impulse 2 is creative use of solar energy and an ambitious way to promote it, but the solar photovoltaics industry already has been growing at a rapid pace, he added.

PV usage rose in the U.S. by 30 percent in 2014 to 6.2 gigawatts, after accounting for less than a single gigawatt three years earlier, according to GTM.

There are approximately 600,000 solar PV installations in the U.S. so far, and the economics are in favor of that figure increasing, noted Shiao.

"The cost for solar PV continues to decline as well," he added. "Prices for solar modules have fallen by over 70 percent in the past five years, and the overall cost of a solar system for a home has fallen by 53 percent over the same time period."

The structural appearances of plant cells and animal cells show great extents of similarities. This …

Vitamins for Skin: A Guide to a Healthier

Real beauty isn't about being picture perfect. You should be able to admire and feel good about your…

(Photo Source: Google Images -- pictures of renewable and clean sources of energy) A few weeks back,…

Si2 and its vital role to inspire change