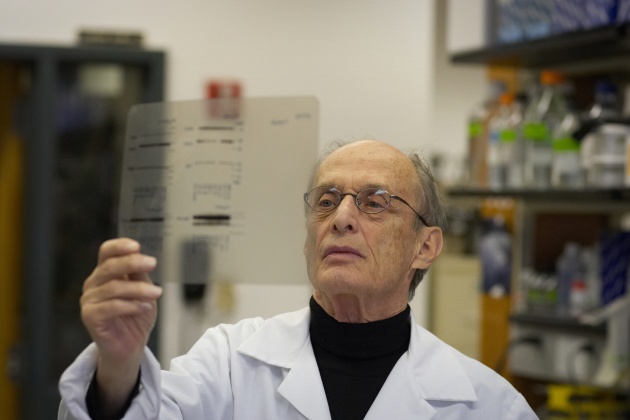 Nobel Laureate Dr. Paul Greengard is the Vincent Astor Professor of Molecular and Cellular Neuroscience at The Rockefeller University and the Director of The Fisher Center for Alzheimer's Research. In January, we hosted Dr. Greengard at the Film Annex Studios for an interview with Ushma Neill, the Executive Editor of the Journal of Clinical Investigation. The 30-minute interview regarding Greengard's studies on neurotransmission and brain signals is part of the Conversations with Giants in Medicine series.

Dr. Greengard's studies have changed our understanding of how the nervous system functions at the molecular level and invalidated a popular misconception that all nerve cells are identical. Moreover, Greengard, in collaboration with his wife, the sculptor Ursula von Rydingsvard, established the Pearl Meister Greengard Prize to honor the accomplishments of women scientists. Named in memory of Dr. Greengard’s mother, the prize includes a $100,000 honorarium.

In support of our Women's Annex initiative, I talked to Dr. Greengard about the history of the prize, the reason for its creation, gender balance in science, supporting women scientists, and empowering women through science.

You donated your monetary share of the 2000 Nobel Prize in Medicine to Rockefeller and, in partnership with supporters of the University, you created the Pearl Meister Greengard Prize to support women scientists. Was this something you've always wanted to do? In other words, what was the main reason for creating the prize? Did you think female scientists were not getting the recognition they deserved in the field?

The prize’s namesake, my mother Pearl Meister, has always loomed large in my life though I have no recollection of her—not even a photo.  She died giving birth to me, and I wasn’t aware of her existence until I was 21 years old.  I have since learned from others that she was an intelligent and gifted woman.  I have long wanted to give her a legacy.

When I received the Nobel Prize, my wife, Ursula von Rydingsvard, and I decided that we wanted to use my share of the proceeds to create a prize to honor women scientists.  And we thought it was fitting to name the prize for a woman who might have achieved great things in her life had she had the opportunity and encouragement.

It became clear to me—based on the outpouring of gratitude that my wife Ursula and I have received because of this prize—that there is still a great need to recognize the contributions of women scientists.  I have received many letters and emails from young women who attend the annual prize ceremony every year and who tell me they are inspired by the recipients.

I am pleased that the prize ceremony draws together a spectrum of supporters, from high school students with an interest in science to the upper echelons of academia.  Parents bring their children, and science teachers bring their classes.  There are undergrads and Nobel laureates in attendance. It’s a celebratory event and also an opportunity for a new generation of science enthusiasts to meet and learn from the experiences of extraordinary women researchers.

What are some of the main factors the selection committee pays attention to before they grant the prize to the winning scientist?

The Selection Committee considers a number of factors.  The recipient must be an active scientist and have made transformative achievements in her field of study.  Some of the recipients have been overlooked for major scientific awards, while some have received numerous other honors.  Many have also distinguished themselves as great mentors and advocates for other women scientists.

Do you see a dramatic increase in the number of female scientists and their involvement in scientific studies since you started your career in the field?

Throughout my career, I have been aware of the discrimination that women face in science at all levels.  In recent years—partially because of the feedback I have received about this prize—I have also learned about the emotional toll this discrimination has caused and how important it is to honor women scientists and support them throughout the academic pipeline.

I believe that achieving gender balance in science is a priority. Studies have shown that more women are graduating with degrees in science, but women are still underrepresented in the higher levels of academia.

At Rockefeller University I have seen great improvements since I joined the faculty in 1983.  This has been accomplished in part because of the foresight of the University’s leadership and also because, as I mentioned, there are now more women pursuing careers in science.

The University has a tremendous cadre of women heads of lab who serve as mentors to our students.  In fact, two of our heads of lab, Drs. Cori Bargmann and Titia de Lange, were recently selected to receive the inaugural Breakthrough Prize in Life Sciences, an award created by leaders in the technology industry—they were the only two women out of eleven recipients.  Both Drs. Bargmann and de Lange serve on the Pearl Meister Greengard Prize Selection Committee, so I feel the prize is in good hands.

I am also proud that half of the scientists in my lab are women.  So, at Rockefeller, I feel we are on the right track, though there is always room for improvement.

Do you think the Pearl Meister Greengard Prize will one day be given to female scientists in developing countries with fewer resources?

This is an international prize, and there are many outstanding women scientists who deserve recognition all over the globe.

Can we say that in addition to recognizing the work of women in science, the Pearl Meister Greengard Prize promotes women's empowerment? In your opinion, what are some of the ways to introduce a well-rounded education in science to schools in developing countries like Afghanistan, hoping that this education empowers the citizens in an educational, social, and financial way?

I hope that the Pearl Meister Greengard Prize does promote women’s empowerment.  Every year, my wife and a group of incredible women choose a guest speaker to present the prize.  We have been fortunate to have had amazing women, mostly non-scientists, present the prize.

In 2011, Michelle Bachelet was the prize’s presenter.  As you may know, she is the former president of Chile and is now the executive director of UNWOMEN, a new organization within the UN to promote gender equality and empowerment.  Dr. Bachelet addressed the exclusion of women in science and how detrimental this is to the progress of biomedical research as a whole.  We all suffer if women are not allowed or encouraged to fulfill their potential.

As Dr. Bachelet said, the roots of this exclusion begin at a human rights level.  When women do not have basic social and political rights, it is nearly impossible for them to achieve success in science or any other field.

I agree with Dr. Bachelet and I think that in order for more women in the developing world to become leaders in scientific research, they must first be given the right to quality education and the social opportunity to benefit from their education. 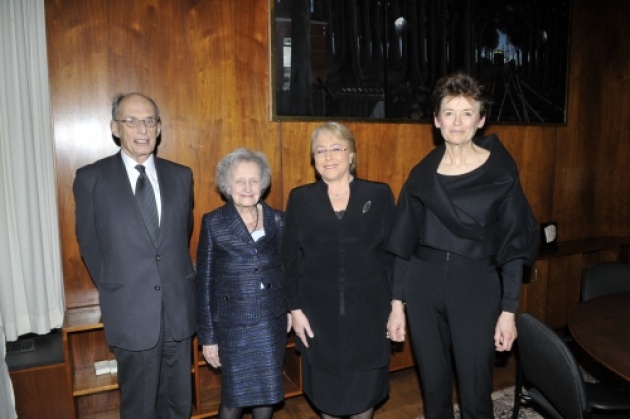 Watch the interview with Dr. Greengard below: