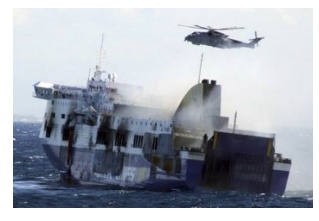 Italian officials say they cannot be certain how many people are still missing from the Norman Atlantic ferry off Corfu, with evacuation complete.

One man died trying to escape the ship, which was on a night journey from Greece to Italy, and a further nine bodies were later found.

More than 400 people were rescued amid gale-force winds and thick smoke.

Survivors have described "scenes from hell" as order broke down aboard the ferry ahead of the rescue.

They gave accounts of passengers trampling over and hitting each other to be the first in line to be taken to safety.

Captain Argilio Giacomazzi was widely praised for staying on board to see the evacuation through, more than 36 hours after sending out a distress signal.

It is unclear what caused the fire to break out on Sunday on the car deck of the ferry. Italian prosecutors have opened a criminal investigation.
'Not on the list'

"We cannot say how many people may be missing,'' Italian Transport Minister Maurizio Lupi said at a press conference on Monday evening.

He said the reason a definitive figure could not be given was because of errors on the passenger list, no-shows at boarding or people getting off at a stopover on the Greek island of Igoumenitsa.

"That is why we are continuing our [search] effort: we cannot know what the exact number was," he added.

Mr Lupi said it was up to the departure port to ensure the passenger manifest tallied with the list of those people who were rescued.

Italian navy Admiral Giovanni Pettorino said 80 of those rescued had not been on the passenger list at all. Correspondents say his remarks give credence to suggestions from Italy that the ferry may have been transporting a number of illegal migrants trying to reach Italy.

"I strongly doubt that all the names on the list are real," he told Mega TV. "We have two persons with the same name who turned out to be one person."
Feet scalded

Survivors described how the fire which began on Sunday morning had created chaotic scenes on board, with the crew apparently overwhelmed by the crisis.

Those recued have complained there were initially no fire alarms and no knocks on the door from the crew to awake sleeping passengers as thick and billowing smoke made its way into their cabins.

As passengers tried to escape from the flames by going on to the deck, they were confronted with freezing cold rain and huge waves while heat from the fire below scalded their feet.

It was then that pushing and shoving broke out as passengers fought each other to a lifeboats slot or a helicopter basket.

"Everyone there was trampling on each other to get onto the helicopter,'' Greek truck driver Christos Perlis told the Associated Press news agency from one of the rescue vessels.

"The jungle law prevailed," Greek passenger Irene Varsioti said. "There was no queue or order. No respect was shown for children."

Another Greek passenger said he had "witnessed an image of hell as described by Dante, on a ship where the decks were melting and we were trying to find some place that was not burning to stand on".

Other passengers complained the lifeboats had not worked and that only one had been launched in the water - with none of the crew on hand to help people.

Some survivors suffered from hypothermia or mild carbon monoxide poisoning ahead of their rescue just after dawn Monday.

More than 230 passengers and 34 crew members were Greek nationals. Others came from Italy, Turkey, Albania, Germany, the UK and several other countries.