Committing a crime is a dirty, unjust, and unlawful act. But, seven women made it look suave, smooth, and glamorous. No women can do it more fashionable than these women from the film Ocean's 8. 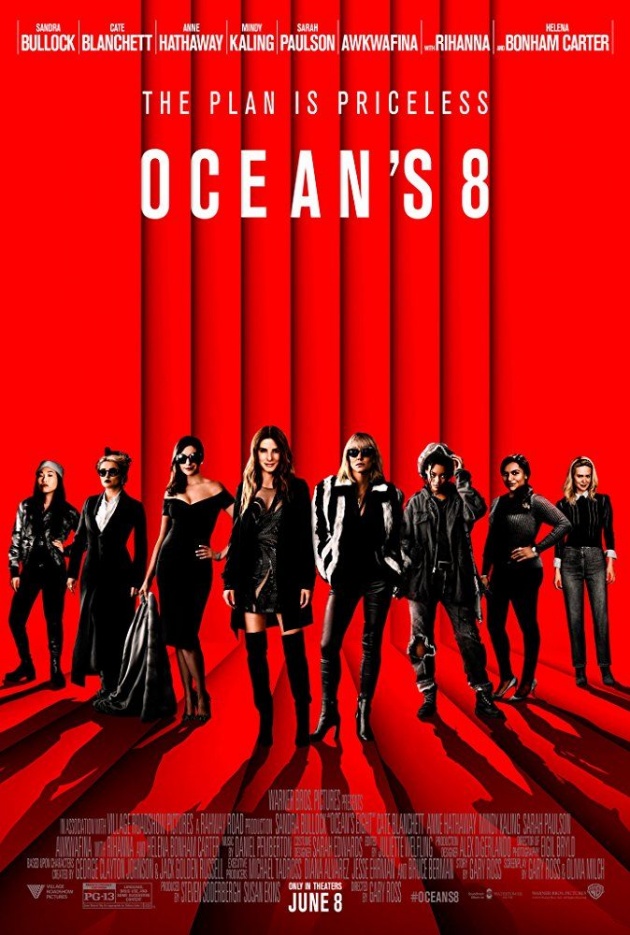 Ocean's 8 is an action, comedy, and crime film directed by Gary Ross, produced by Steven Soderbergh and Susan Ekins, and distributed by Warner Bros. Pictures. The film was released on the 8th of June 2018 and is the fourth sequel and a spin-off of the Ocean's trilogy.

Debbie Ocean was granted parole after spending over five years in prison. She promised the officers to live a normal life and never do a crime ever again. However, she broke her promise the moment she was freed from prison. Shoplifting and even getting a room at the hotel until she met with her friend Lou to carry out the heist she had carefully planned for the entire time she was in prison. 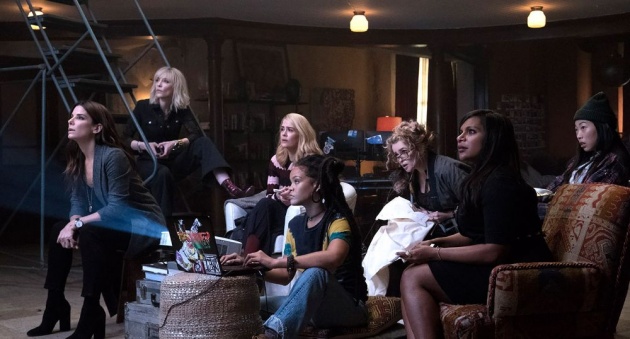 Debbie and Lou gathered five other women who could best execute the plan. Rose Weil, a fashion designer in debt and whose pieces receive bad criticism. Debbie's friend, Amita, a jewelry maker. Constance, a street con with excellent pickpocketing skills. Tammy, a mom and Debbie's friend living in the suburbs who sells stolen goods. And Nine Ball, a superb computer hacker. 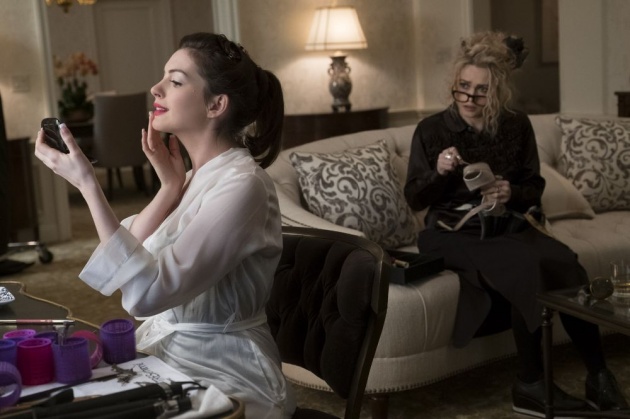 Their mission is to steal the $150 million diamond Cartier necklace called the Toussaint during the Met Gala. In order to do that, they have to make celebrity Daphne Kluger choose Rose as her fashion designer for the Met Gala. When they have successfully captured Daphne's attention to choose Rose as her designer, Rose and Amita went to Cartier to get permission for Daphne to wear the Toussaint on Met Gala. After successfully persuading the Cartier officer, Rose and Amita requested to see the necklace where Rose had secretly digitally scanned the necklace with a special eyeglasses. A replica out of cubic zirconia was then made to be used at the Met Gala. Tammy then applied at Vogue to be involved with Met Gala preparations. 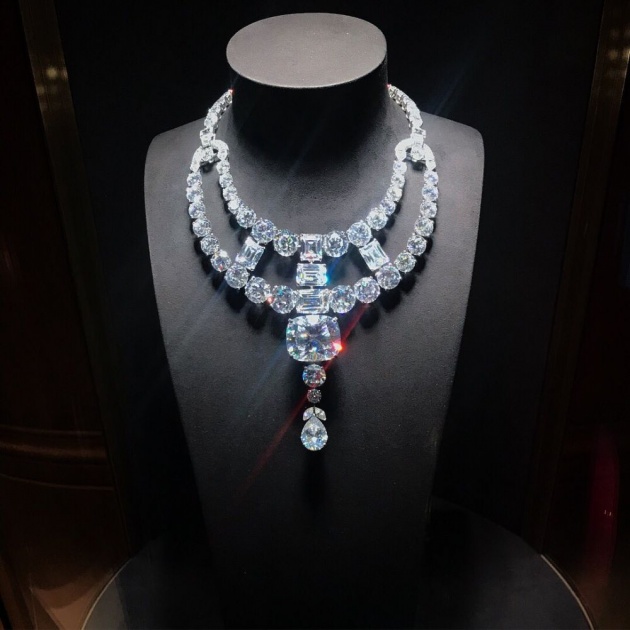 On the Met Gala day, Rose discovers that the Toussaint can only be unclasped with a special device carried by the Cartier officials. After letting it know to Debbie and the rest, Nine Ball called her sister to make a duplicate of the device. Her sister was able to make a duplicate and gave it just in time the Met Gala began. Rose walked with Claude Becker and Daphne, who's wearing the Toussaint, at the red carpet while Debbie followed a little while. Lou went as a cooking staff at the kitchen and poured something on Daphne's food. As soon as foods were served at the tables, Daphne immediately ate hers as she explains that she haven't eaten a lot in the past few days. She began to feel upset and so she rushed to the comfort room to vomit. Debbie stopped the necklace bodyguards from entering the women's bathroom where Constance swiftly snatched the necklace while helping Daphne to vomit.

The Toussaint was then brought to the dishwashing area where Amita, disguising as a dishwasher, got the necklace and began disassembling it. A thorough search was made on everyone and the entire venue when officials discovered that the necklace was missing. Nine Ball, who was watching everyone's move by hijacking the Met Gala's security cameras, informed the girls that one official was about to open the room where Amita is. Debbie then told Tammy to bring out the replica Toussaint to stop the commotion. Constance went to Amita and got the disassembled necklace and passed the pieces secretly to the other girls. Debbie then walked to Becker, an art dealer who framed her for a crime he made, and slipped a piece of the jewelry in his suit. 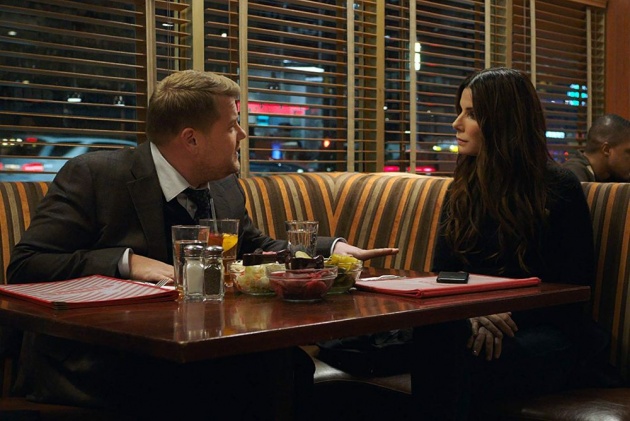 The necklace was only discovered fake when it was about to be returned to the vault. Cartier hired John Frazier, an insurance fraud investigator, to solve the case. Frazier was familiar of the Ocean family and so seeing evidences of Debbie at the Met Gala gave him clues of who the possible suspect was. Later on, Daphne visited Debbie and the rest to reveal that she was aware of what was happening around her due to Rose's bad acting. Debbie then told that Daphne now belongs to the team and would get a share of the money they'll get from the necklace. To finish the mission, Daphne went to Becker's place, sneaked into his closet, and took a photo of the diamond piece Debbie slipped on his suit. Becker was arrested and furthermore pressed on the crime when Debbie hired old women to testify Becker's involvement with the missing necklace.

During their celebration for a successful heist, Lou reveals that the Toussaint isn't only the jewelry they have stolen from the Met Gala and so their shares would increase to around $38 million each. Tammy continued with her business, Nine Ball had her own billiard house, Constance became a vlogger on Youtube, Rose was debt-free and opened a fashion store, Amita went to Paris and met the guy on Tinder, Daphne became a director, Lou went on a travel with her big bike, and Debbie went back to her brother Danny's grave and celebrated the success of her plan.

I absolutely liked the retro video transitions and other vintage style elements used for the film. The slow and fast zoom in and zoom out were also cool. It added to the crime and investigate vibe on the film. Of course, the close up shot of the jewelries at the Cartier to bring out their beauty was magnificent. The top view long shots of New York City and the venue of the Met Gala was also fabulous. It showed the nature and urban side of New York, and how jam-packed but well-organized Met Gala was.

I have barely noticed the special effects for this film. Some that I only had noticed were the digital eyeglass, probably some of the graphics appearing on Nine Ball's laptop, the magazine frames that would occasionally pop on the screen, and the graphics Nine Ball made to lure the Met Gala official in charge of the security cameras. The effects they did for the special digital eyeglass was cool, by the way.

The ensemble was definitely star-studded with award-winning celebrities. Sandra Bullock, Anne Hathaway, and even singer Rihanna. Yes, I was surprised that she acts too! But I wasn't disappointed with her acting, she's actually good and her role somehow fits her too. I love Helena Bonham Carter for her portrayal as Rose as well. Her face was hilarious while scanning on the Toussaint necklace. I love characters with humor.

Aside from the big celebrity ensemble, other huge names in the entertainment had cameos on the film too. Some of them were Gigi Hadid, The Amazing Yen, Serena Williams, Heidi Klum, Katie Holmes, and Dakota Fanning. Anna Wintour, editor-in-chief of Vogue, also made a special appearance at the Met Gala scene.

The Met Gala won't be Met Gala without the luxurious gowns and jewelries. Stylish gowns were showcased at the red carpet and at the gown exhibition. Some of the gowns were made by popular designer fashion brands like Dolce & Gabbana, Valentino, Givenchy, Prada, Alberta Ferretti, Zac Posen, Naeem Khan, and Jonathan Simkhai. I love all their gowns and looks especially when they were walking down the stairs after the successful heist. I absolutely love the gowns of Sandra Bullock and Rihanna.

Debbie Ocean was granted parole to have a new beginning with her life. This conveys that people who deserve second chances gets it. People definitely can correct their mistakes in the past by doing what we think is right in the present and future. However, Debbie did otherwise in the movie. It's wrong to rob but Debbie did it to get back at Becker and begin a new life with the money she got out of the Toussaint.

■ NO SECRETS CAN BE HIDDEN 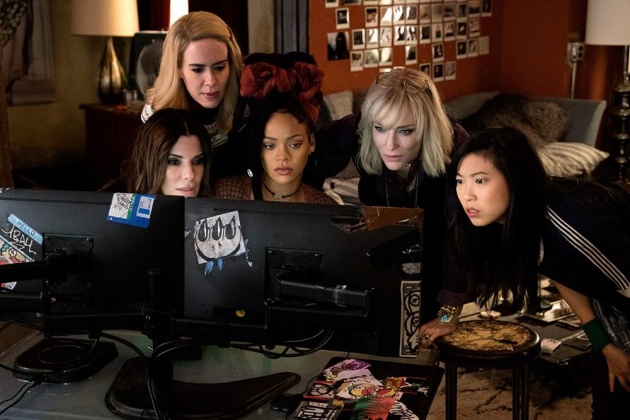 The film proves that secrets can't be kept too long. Nine Ball was able to snoop on the top information of Met Gala, Daphne knew what was going on all along, the fake Toussaint was discovered, and Frazier has a strong feeling that Debbie was the person behind the missing necklace. The film tells us that no matter how careful we are at keeping a secret, it will eventually come out. No secrets can be kept forever.

"If you're going to have a problem with stealing, then you're not going to like the rest of this conversation."
- Debbie Ocean

Ocean's 8 highlights the cooperation of seven girls to execute a heist. (Plus, Daphne at the end of the film, which makes them eight.) The film teaches us that we can't do all things on our own. We need people who are great at doing a particular task to help us complete our plan or goal. We also need people who carry the same goal as ours, who specializes at something, and are very willing to cooperate. A team with members who know their roles in the group would definitely carry out a successful plan.

After the heist, the women rewarded themselves by following their dreams with the help of the money they got . This reminds us that we should also reward ourselves after doing a tedious work. It also reminds us to never give up on following our dreams. 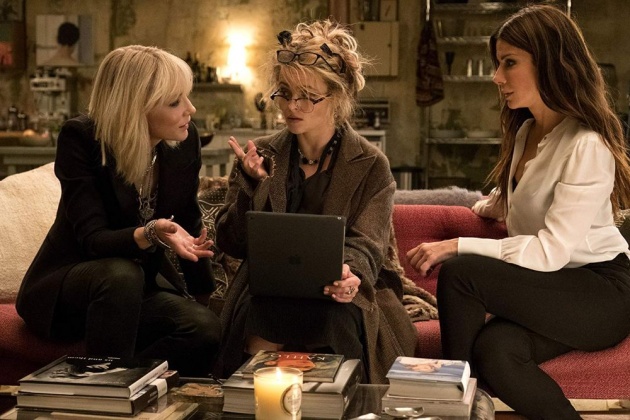 Debbie cautiously planned the heist for over 5 years, picking out the people that she thinks would be best to help her do the job. Her careful planning didn't waste everyone's effort and brought the heist into a success. Debbie teaches us that we should give time to carefully plan for a goal. We should think before we act. Others might think you're anxious, but meticulously thinking the plan brings you higher chances of successfully accomplishing it. You're not anxious, you're just preparing. 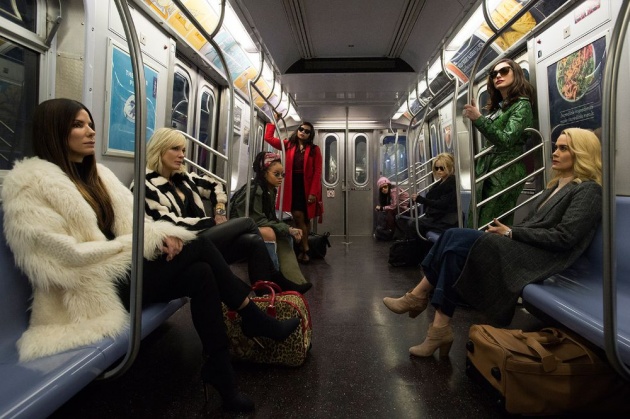 Doing a crime in real life isn't glamorous at all. However, Debbie and Lou made crime look like a fun thing to do and went all fashionable from planning and executing the heist. All the women involved in the heist also wore gowns after the heist. The idea was kind of funny but it wouldn't be fair not to see them in gowns. Ocean's 8 encourages women to remain elegant and composed no matter what they are doing or how stressful their job is. After all, women are meant to live a glamorous life.

THE MOST STYLISH HEIST

Ocean's 8 is definitely a film that makes committing a heist appear fun and stylish. It's definitely not right to do a crime and we should never follow the characters' act of heist and intruding confidential information. On a different note, the movie was entertaining the entire run. I enjoyed it and surely got a lot of lessons to learn from.