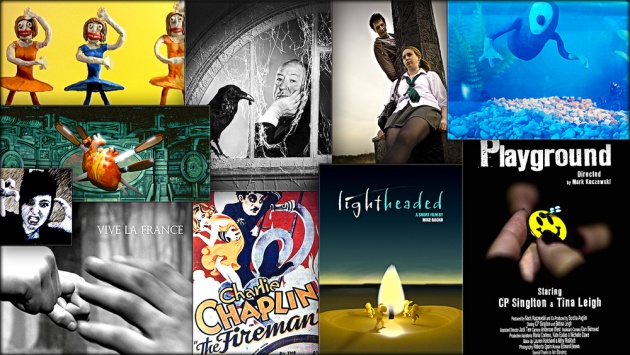 We kick off the month of July with Toni Williams' creative bubble and introduce you to a brand new filmmaker on our platform. Toni is not only a filmmaker, but a designer as well. She's been making models since she was a little kid and is now applying her skills to animation and stop motion. Earth, which was inspired by one of her dreams, explores a growing bond between an alien and a dog. A humorous and promising short film that adults and children alike will enjoy. Toni writes blogs about the making of her films and posts pictures of her models on her photo gallery, so you can follow her creative process and get a glimpse into her personal world.

Sometimes we wonder if one day, the films of our filmmakers will be considered classics. Do you think Chaplin, Hitchcock, or Keaton ever thought that their movies would be studied as references in their genre? Just wondering about it makes us want to watch these gems again and again. Classic Movies Web TV is the place to go if you want to re-discover some of the best cinema ever made. For an exciting thriller, we suggest The Lady Vanishes by Hitchcock, for a good laugh, A Night In The Show by Chaplin is the way to go. The Classic Movies Web TV also showcases lesser known movies, so browse through the collection and find your favorites.

And the 8 top movies this week are:

Read a review of Mark Kuczewski's film Playground by our Creative Director, Eren Gulfidan! She recently started a weekly recommended film series and will be posting a new review every week.