Olivia Culpo from EUA is the new Miss Universe 2012

Olivia Culpo, from EUA, is the new Miss Universe

The Miss Brasil Gabriela Markus stay with the 5th place.
89 Misses from all over the world participated on the beauty competition in Las Vegas.

Olivia Culpo, representing the United Estates with shes 1m63cm, is the new Miss Universe. Its a shame, she wons at Home on a questionable competition with more 88 misses from the world in 2012 that have more beautifull misses that the choosed by the juri. The most important event of Beauty that was see for a Billion people in the world was made in the nigth of Wednesday (19) in Las Vegas, at EUA. The american suceeds the angolan Leila Lopes, that wons in 2011. The cerimony to pass the Crown Happens on the Planet Hollywood Hotel and Cassino.

See the photos from the Misses.

The Miss Brasil 2012 that was the most beautifull miss with the Miss Venezuela and Miss Australia was eliminated on the choose for the third places, the gaúcha from the south of Brazil Gabriela Markus, with 24 years, gets the 5th place. 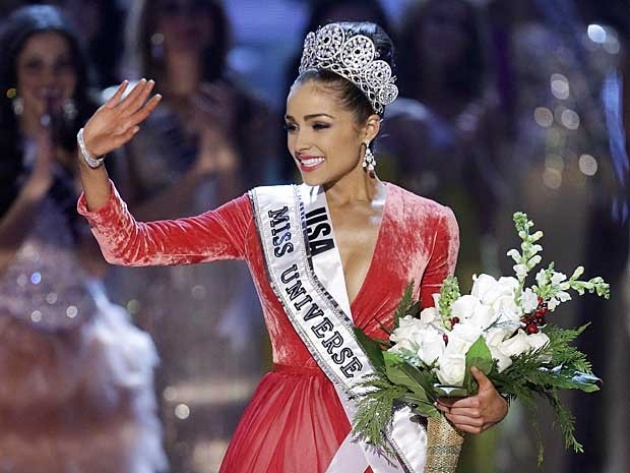 The most beautifull brazillian, Gabriela Markus stay with the 5th place.

The second place goes for the Philipines Janine Tugonon, with 23 years old; in third, the venezuelanian Irene Sofia Esser Quintero, 21; and the fouth place with the australian Renae Ayris, 22.

In Las Vegas since the day 2 of december to participate of Miss Universe, the Miss Brazil Gabriela Markus said that she was very calm on the final.

The gaúcha dividw the room with the angolanian Marcelina Vahekeni, 22, that she was her traductor during the ativities with the misses.

All the participants of Miss Universe have a full agenda with events e compromisses daily. The day of the brazillian, for example, begins before the 6 o´clock in the worning, when she did the makeup and  hair.  The participants trained for the competition a minimum of three hours per day.