Where can you go to have five drastically different yet amazing, memory-making journeys without leaving the country? Why Australia, of course! Come with me as we take a look at five incredible journeys I had on a two week tour of this magical island. 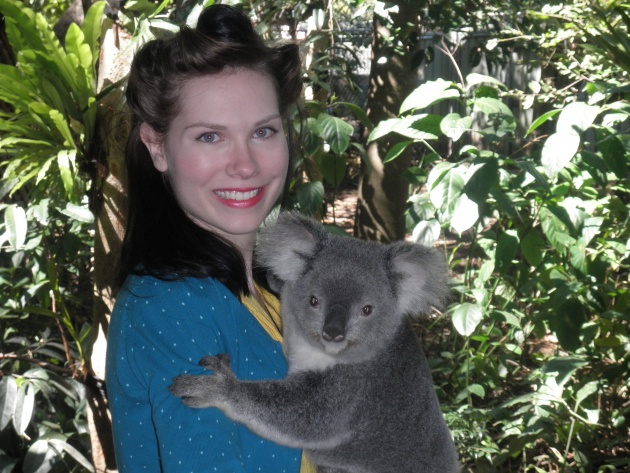 Every American who travels to Australia dreams of seeing the iconic, fluffy mascot. The Lone Pine Koala Sanctuary in Brisbane makes it possible to get up close and personal with a koala and they even take your picture. Standing in line to hold a koala for the first and probably only time, I did not know what to expect- Is it heavy? Is it nice? How do I hold it? Thankfully, the team at the sanctuary takes care of all that. All I had to do was stand and hold my arms as directed as they placed the koala on me. Keeping my arms in a low circle position with my hands forming a seat, the koala was gently transferred from the handler to me. The first thing I noticed was that it was heavier than I expected and it had extremely powerful claws which gently wrapped around my arm. Maintaining my statuesque position, the handler positioned the koala on me like a mother would straighten the outfit of a young child for the first day of school. Finally the koala was in perfect, picture taking position and the photo was snapped. The whole experience only took a few moments but it was very surreal and made for a great memory.

Swimming in the Great Barrier Reef

The Great Barrier Reef. It’s name practically says it all. It’s a beautiful and amazing ecosystem which has so many life forms at every level. There are colorful coral, swaying seaweeds, fast swimming fish and much, much more. To keep the sea sick monster at bay, I popped Dramamine every hour and sometimes twice an hour. The Dramamine worked but it couldn’t stop me from walking like a drunken Popeye around the floating dock and the ship. The point of visiting the Great Barrier Reef is not to stay on the ship or floating dock but to go into the water and experience it hands-on. Due to improper budgeting, I wasn’t able to do any scuba diving or deep sea diving. If you don’t go into the water, you can take a submarine and a glass bottom boat ride and see the ocean life that way. Both are still enjoyable but do not compare to going into the water. If going to visit here are three tips to remember: Bring Dramamine, Bring a Credit Card, and Be Careful.

The Outback: Australian for Wild

I don’t know if that’s actually true but it could be. The Outback is untouched nature at is finest with the legendary Uluru rock at its heart. To help preserve the nature, wildlife and indigenous culture of the Outback, only a small area surrounding the Uluru rock is open to tourists. This means that your chances of catching sight of an emu, a koala, or a kangaroo in the wild are really slim as they tend to stay away from that area. What you will see instead is the yellow-green landscape against the blue sky backdrop outlining the red-orange shape of the Uluru rock. What you will hear is the untold story of the Aborigine peoples in their native tongue while you are guided around the Uluru rock with a translator. What you will feel is a sense of freedom as you gaze out at the vastness around you and realize that there isn’t an end for miles on end. What you will take away from this visit is a sense of humility and a longing for simpler times when we were one with nature.

After a long, lazy day of relaxing on the white –gray sand and playing in the azure colored ocean, it was time to embark on a sunset camel ride on Cable Beach. My first impression of a camel up close is that they aren’t very friendly. Did you know that camels can roar? Thankfully, they settled down for show time. Before I sat on my designated camel, the handlers told us how camels raise their back legs first before raising their front legs when getting up. The sudden six foot jump up from the ground was at an odd contrast with the front end still on the ground. Half suspended in the air, I felt a mix of vertigo with fear of falling off the camel. After the longest three seconds of my life, the front legs raised and I was officially six feet on the ground, seeing the world from a camel’s eye view. Sitting on top of my camel, taking in the picturesque sunset on a beautiful and deserted beach was a fun, memorable and easy way to end my twenty-four hour visit to Cable Beach.

Getting Over My Fear of Heights with the Sydney Bridge Climb

I don’t like heights. Well, to be accurate, I don’t like the climb. Watching the ground become farther and farther away as I climb to new heights does not sit well with me or my stomach. That’s why I kept refusing to do the Sydney Bridge Climb in Sydney Harbor. When the time came to go to the bridge for our climb time, I felt my stomach start to shake. Walking to the bridge, it seemed as though it got bigger with each step. I entered into the bridge climb center not knowing what to expect. After a brief “training”, the tour guide asked if anyone was afraid of heights. I screamed yes and was told to go to the front of the line. I wasn’t sure that was a good idea but I complied. The first few moments weren’t too bad, in fact it was really neat seeing the under workings of a bridge. With my safety belt attached to a railing system, I started the ascent to the top of the bridge. I concentrated on the bright red color of my Converse sneakers until I finally made it to the top of the ladder. Those first few steps onto the arch were nerve racking. With a little encouragement from the tour guide and a push from the people behind me, I made it to the summit of the bridge’s arch with an amazing aerial view of Sydney Harbor. Looking out over the oh-so blue water, I realized that some things are better off the ground.

Visiting Australia was a dream come true and a visit I highly recommend. I learned that Australia is not for the faint at heart. Not only will you come back with great stories, you’ll come back with a new you.