Being part of an online platform, watching films daily on a computer screen, and corresponding with filmmakers around the world via email can make it easy to forget that films get made outside the online realm that we have all grown accustomed to and take for granted. We are so used to searching for content on the Internet that most of us don't even think about the physical collaboration that goes into the making of that film, TV show, or music video. We don't immediately think about the conversations, the meetings, the rehearsals that bring people closer and lead to the creation of what we're watching on our monitors. And, some of us still separate the world we live in into two realities: Online and offline. Attending the Tribeca Film Festival throughout the past week made me realize that the line between these two worlds has gotten less and less visible to a point where it's almost impossible for one to exist without the other. It also made me appreciate the conversations and the time spent together with people in the industry I work in so much more.

First of all, Tribeca was the most organized, friendly, and tech-savvy film festival I've attended in the past few years. The industry concierge service they had made it possible to set up meetings with filmmakers in an easy, quick, and professional way. There wasn't any room for miscommunication. The staff was attentive and helpful. The comfortable industry lounge they set up was the perfect meeting spot for a filmmaker and an industry attendee, such as a distributor or someone from the press.

I watched countless short films at this year's festival, and I watched almost all of them in the theater. Most short programs were sold out to a curious, attentive audience. After every screening, I took note of my favorite films and went straight ahead to the industry concierge where I arranged meetings with filmmakers. In addition to the one-on-one meetings I had, nighttime parties, including the one organized specifically for "short" filmmakers, the industry-filmmaker party, and finally the Heineken wrap party, enabled me to get to know the ones I met a little bit better. But, the festival was more than the abundant face-time, screenings, and conversations. 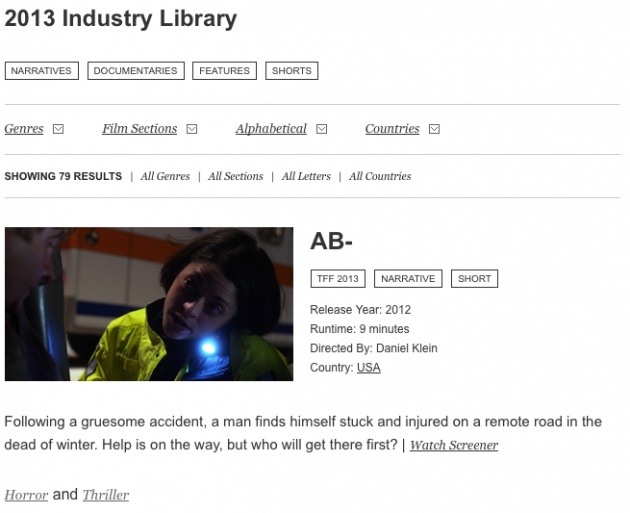 Tribeca did an incredible job creating an online screening library that the industry had full access to. So, I was able to watch all the films I didn't get a chance to see in the theater on my computer. In addition to making the festival experience easier and the films more accessible, the library notified the viewed films' PR and sales agents with the name and email address of the person who watched them. How genius is that? So the filmmaker or her sales agent immediately knows who watched her film and can contact that industry person if there's any interest. Other pluses were the easily navigated and user friendly website of the festival, which was always up to date with special events, talks, and panels. Perhaps a well-organized website leads to a well-organized festival, or vice versa. Either way, I was happy as an attendee. 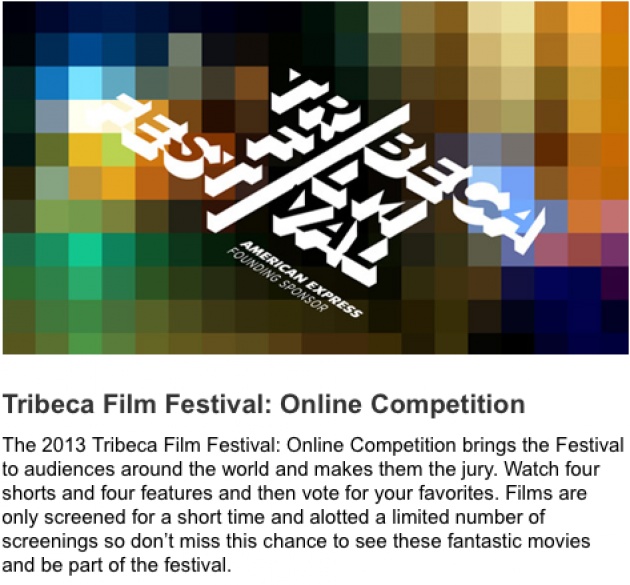 When I look back at the festival, I don't only think about the screenings and the interactions I had with the filmmakers, but also the online experience. Half of the filmmakers told me I could watch their films by going to the online screening library; some gave me links to password-protected videos on Vimeo, reminding me once again that the offline and the online go hand in hand. Moreover, one of the festival competitions took place online, enabling viewers to vote on their favorite films without going to the theater.

In every single conversation I had, the response to Film Annex's model of online film distribution and online film financing was tremendous. Talking to filmmakers now compared to two or three years ago was so different. They got me immediately. When I was telling a filmmaker about being featured on Film Annex's homepage and Eren's Picks, he interrupted and said, "So it's like a game, right?" And I said, "Yes, exactly." There's no doubt that online video has advanced remarkably within the past couple years, and we all know that people are spending much more time online than they were before. So perhaps, the new, quick understanding is a sign of that. Or, it's the consequence of taking the time to talk to someone in person after watching their film in the theater and being able to put a face behind a business model or a piece of art.

My Tribeca experience overall has showed me the importance of face-to-face conversations with filmmakers and other industry members while reminding me that we live in a world where online and offline activities are inseparable. What does this say about the future of film and the future of festivals? We'll have to see in the upcoming years, but I see hope and positivity.

In my next Tribeca blog, I'll talk about my favorites shorts at the festival and my interaction with filmmakers. So come back for that!