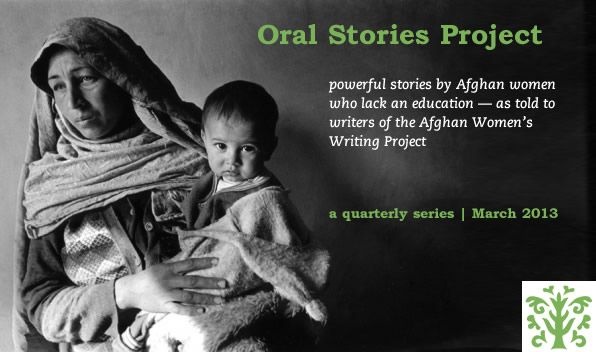 Yes, my name is Mena and I am married.  I married twenty-four years ago.  I am thirty-nine years old now and I have four children.

Where were you born?  Tell me about your life.

I was born in Jalalabad.  In the past, life was very good.  My husband and I were comfortable and we had enough food.  When my husband was twenty-seven years old he went to war in Tapay Khaibar and everything changed.  Everything in my life became a struggle and it has stayed this way.

I was pregnant at the time and I had my three other small children.  The war was hard.  The rockets and bullets were coming like rain from every side.  No one could go to school.  No one could live.  People were hiding themselves underground.

When my husband went to war, it was the last time I saw him.  He disappeared and we did not know what had happened to him.  We did not have anyone to search for him.  My brothers never did anything and I couldn’t do anything; since I was a young woman I was not allowed.  Still today, we do not know if he is alive or not.

With whom were you living in those times?

I was living with my brother-in-law.  He was always fighting with me and threatening that I would have to marry him, but I kept saying that it has been only a month since the loss of my husband. When his father disappeared my oldest son was only two years old, the smaller son was one-and-a-half, and my daughter was one year old.  The other one wasn’t born yet.  I did not have many resources to resist, but I would reject my brother-in-law and his threats.  He would respond by saying, “We are not going to keep your orphans.”

I had lots of difficulties.  Whenever I would go to the home of any of my sisters-in-law, they wouldn’t let me into their homes, thinking that I would marry their husbands.  I was miserable because of my brother-in-law and his wife.  Every day they were putting their hands in my hair and threatening me, saying, “We will hit you and make your face turn from the world.”

Did you ever face violence?

Yes, a lot. When one of my brothers-in-law helped me, his wife complained to people that I was trying to marry her husband.  When he would leave the house, she would hit me and threaten me.  Her son would hit me too and they didn’t let me eat with them. This woman would tell her children to go annoy me and my children, to hit my sons and daughters, and to throw out our shoes and clothes.  When my brother-in-law would come home, she would tell him and he would hit me also.

Another sister-in-law of mine was like that too.  They both said, “We are hitting until her face becomes awful and she won’t be able to take a husband from elsewhere!” Every year passed with hitting.  I could not ask anyone for help. Whenever I tried to put one step out of the door they would stop me.  My brother-in-law had total power over me.  I developed a nervous condition.  I did not know what I could say and what I shouldn’t say.

Where do you live now?

My mother took me to my own family’s home. But after a short time of living there one of my brothers who was an engineer died in an explosion while working on the highway in Kunar province.  My other brother was killed while on the way home from duty as president of ARKAN in Kandahar.  When my sister heard this news, she too passed away.

My father couldn’t keep me and my children.  I went to work at several places but still I couldn’t find enough money. We have so many problems in our life.  If you could see my house now, you would realize that it is not livable for a human! From every side the water is coming in through the roof and we have to sit in the water. I don’t have the ability to go somewhere and rent a house.  Everywhere I have gone, I am insulted and told to leave… Everyone is saying, “Get out, get out, get out!”

What has become of your children?

When my son turned seven years old I made him go to work.  His hands were… He worked selling things with kids on the street.  He would make 20 to 30 Afghanis for this.  When he worked cutting the leis that they sold with scissors, his hands would bleed.

My oldest child is now sixteen. They all work in different places.  Their maximum income is between 60 to 80 Afghanis per day.  That is how our life is passing.

Aren’t your children going to school?

How can my children go to school?  They would need pens and pencils and notebooks but I don’t have the money to buy their supplies. If I send them to school then who will bring money to me?  We need money, we need food.

If we didn’t need things then the children of everyone could go to school and university.  When my husband was alive we were happy, but now I can’t afford to give my children an education.  Lots of things remained from my husband that should have helped us, his retirement and salary and other things, but his family never gave them to us.

What is your life like now?  Did anyone ever help you?

My father in-law, God bless him, was a very good person.  He would help us as much as he could, but God took him away from us.  Now we are facing very, very many problems in our life because of the family of my brother in-law as well as my sister-in-law. If they were able, they would eat me raw.

They think I will take their husband.  I always say to them, “What am I going to do with your husband? My own husband was like a prince, but I lost him.” I wish that God will make the life of my children good, that we could have a comfortable life and that we could eat enough, like we once did.