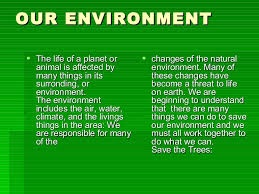 The earth, water, and air, once taken for granted as a sort scenic backdrop for the human drama all become areas of intense discussion and worry.In the 1950s,only a few alert scientists were predictingour present despair over what mankind is doing to the earth.Resources seemed unlimited, the air was fresh and clean,and rivers and oceans were seen as element to be harnessed for power and used to dispose of waste.But in a relatively short time,we have seen the threat of a shift in the balance of nature away from its cycle of of use and renewal to one of abuse,decay,and if we are not careful gradual collapse. 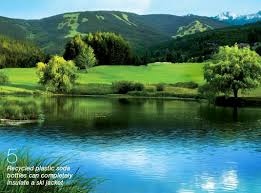 our environment is now a social problem,not just a problem for the sciences.With huge increases in air ,water and land pollution in the past quarter century,the would we now live in poses problem of health and welfare for the large portion of the population .A dirty lake or river not only affect those who live near it,but it also affects the entire ecosphere ,nature's rhythms and cycles,and the future functioning, of man . A threatened environment,like a weak house close to clumbling ,puts man in a precarious:the more he produces good that do not fit into nature's cycle (DDT,for example),the more he pollutes and thus undermines his own health and well-being. 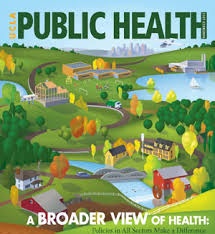 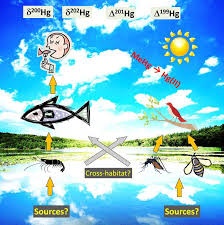 biologists refer to the intricate web of relationship between all living things and the physical environment they share as the ecosystem.It has been shown that each living thing plays a part in this ecosystem.There is a food chain, in which organisms that produce the air own food using the sun's energy (green plants)are eaten by small animals, which in turn are eaten by large animals. The food technology chain is closed by bacteria and fungi , which decompose the wastes and eventually the dead bodies of all living thing, returning useful nutrients for the use of the original producers, or plants. each element necessary for life ,such as carbon,nitrogen and phosphorus goes through cycles of use and reuse;although certain periods in the cycle (if) the element is not available for use, it eventually re-enter the cycle. population of all animals in the ecosystem are adjusted through natural forces, such as disease and predation,to a size in keeping with the food supplies the environment can provide. 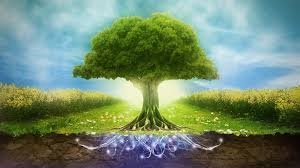 A change in any part of the delicately flicately functioning scosystem carries widespread and often unexpected repercussion. An illustration can be seen in the outcome of the campaign waged in south Africa against the hippopotami that used to graze on agricultural land along the river banks. The hippo population was successfully reduce, but new problem set in. It turnet out that the movement of the hippos through the rivers kept the channels open; without them, the river silted up and then overflowed their banks. the flood damaged crops and homes;moreover, the resulting stagnant poolspermitted a huge increase in the population of water snails which served as hosts for one stages of the life cycle of a parasite that causes the sometime fatal disease,schistosomiasts. so the net result of the attempt to stop the hippos' grazing was a shortage of food and a disease epidemic... 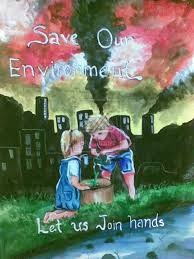