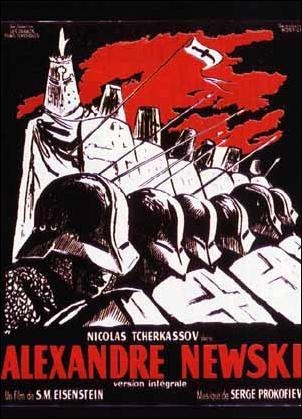 Russian patriotism is on full display in Sergei Eisenstein's wonderful classic from 1938, "Alexander Nevsky." The year is 1242 and the Teutonic Knights (Germans fighting as Crusaders) are looking to march right into Russia. The people look to Alexander Nevsky to lead them into battle against the enemy. Alexander is already a hero for having repelled the Swedes (as a teenage commander!) and having fought against the Mongols. Eisenstein's Germans are so bad that they even toss babies and little kids into a fire, while the Russian people are non-aggressive folk who just want to live their lives in the motherland. The backdrop to this of course is the political/military standoff that Stalin and Hitler were engaged in. 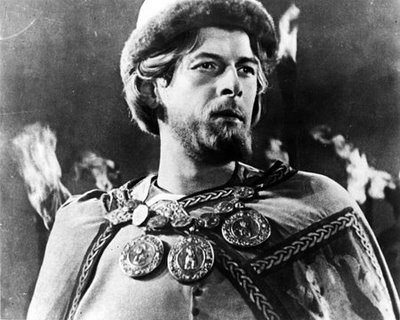 "Alexander Nevsky" was Eisenstein's first sound film and first completed film in ten years. The director had spent those ten years travelling Europe, going to Hollywood to accept a $100,000 Paramount contract that would never be fulfilled due to straight out artistic differences, and a trip into Mexico to film "Que Viva Mexico" which wouldn't be released until after his death in 1958. Upon his return to Russia, Eisenstein was viewed with some skepticism from the Stalin regime for his international wanderings. He would never fully get out from under that skepticism. "Alexander Nevsky" was Eisenstein's choice from a few options offered to him and he would be given a co-director (Dmitri Vasilyev) and a co-writer (Pyotr Pavlenko) to make sure he stayed on point. Before he left Russia for his travels, Eisenstein was already coming under watch for practicing and writing about montage theory. While it's something that we take for granted now, if we even notice it, the montage (forever immortalized for me as a theory in the montage song from "Team America") must've been pretty mindblowing at the time. The Soviet regime preferred Socialist Realism to montages meant to emotionally manipulate audiences whichever way the filmmaker saw fit.

The film was released in 1938 in Russia and it's said that as many as 20 million people saw it. Of course, Stalin had requested a viewing before completion and without Eisenstein's consent or knowledge, his assistants delivered all the reels to Stalin who gave his stamp of approval and returned all the reels except for one which allegedly contained a riot scene in which the Russian people are fighting amongst themselves. Some wanted to pay the Germans to pass on by and others wanted to take them on with Alexander at the helm. Well, we can't have anything other than a unified front portrayed so there goes that. On top of all that, the movie would be pulled from circulation a few months after its release due to the Russian/German non-aggression treaty, the Molotov-Ribbentrop Pact. When the Nazis invaded Soviet controlled Poland a few years later, "Alexander Nevsky" was re-released and given an international release as well, and was praised for the great film that it is. 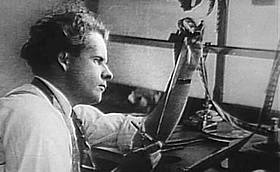 Film has and is at the whim of the day's political climate. Hollywood determined that audiences would not want to see buildings crumble, let alone any from New York, in the post 9/11 atmosphere. Although war films had their sobering moments, like the opening of "Alexander Nevksy" with a skeleton strewn battle field, they were largely seen and made from a patriotic point of view until the 1960s/1970s. Jean Renoir's "Grand Illusion" and William Wyler's "The Best Years of Our Lives" strike me as early anti-war films but they were definitely the minority. Like so many filmmakers of that era, Eisenstein was constrained as an artist by political dictates (and commercial ones in his Hollywood venture) but managed to turn out a movie that should be remembered as one of the all time bests. And my lasting thought throughout this is, has Russia really changed that much in 75 years?

Watch "Alexander Nevsky" below and visit my page for films and blogs on Baxter Martin WebTv. And don't forget all the other spectacular content Film Annex has to offer!