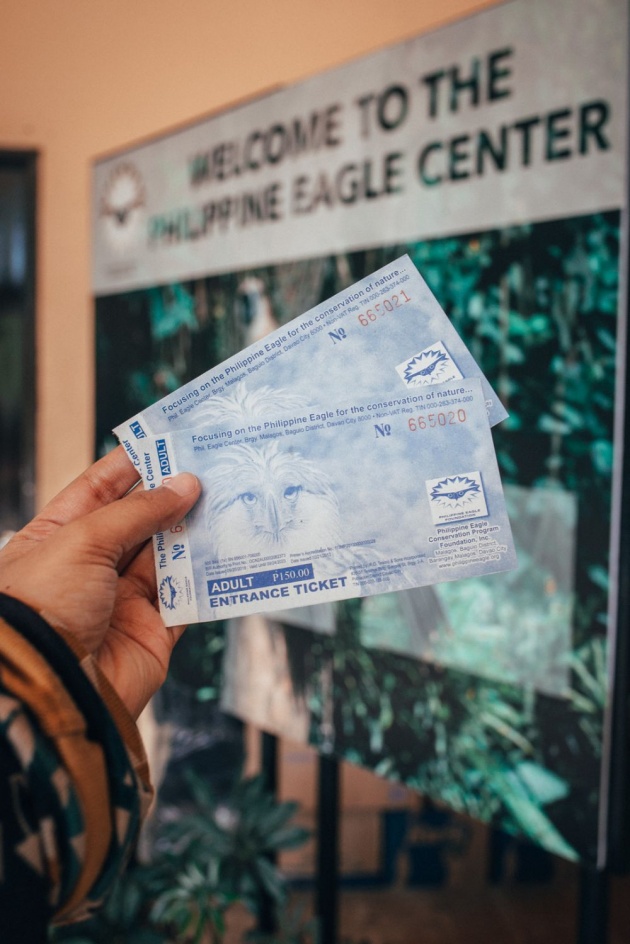 Traveling is not just something that we do out of want but of the need to unwind, to discover new things and to be educated with certain important matters which we might have not known yet prior to coming to a certain spot. Visiting the Philippine Eagle Center was one of these cases. 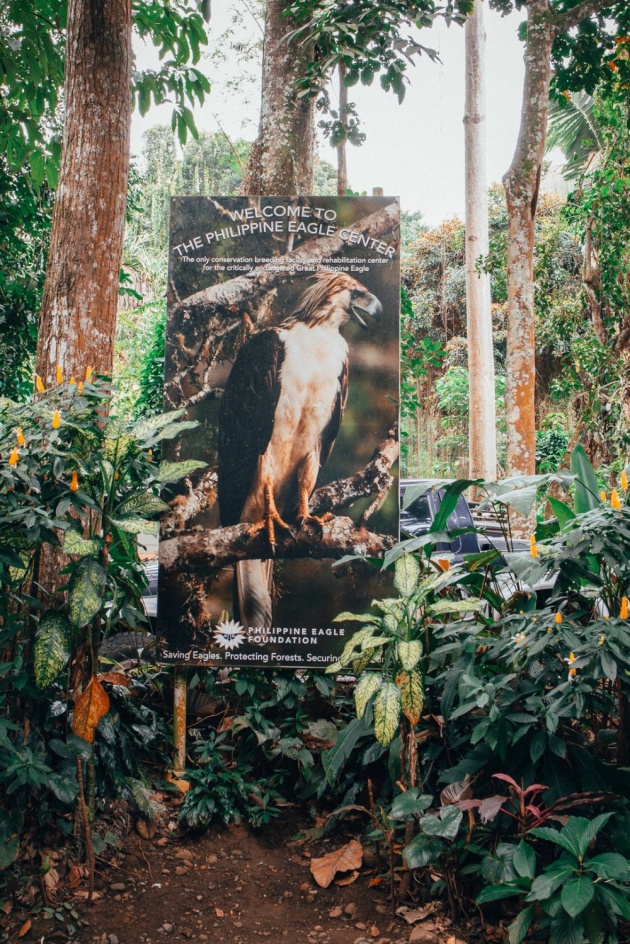 At the foot of Mt. Apo in Malagos, Baguio District, Davao City lies a huge area dedicated to the conservation breeding facility of our critically endangered Philippine Eagle. It's an 8.4-hectare land which has become a primary tourist destination as well in the city.

The center's huge land area maybe overwhelming, however, only a part of this land is accessible by tourists. Allow me to tour you around within this blog.

First and foremost, an entrance fee of Php 150 has to be paid prior to entering the center. This amount will help the center's staff as well as the Eagles. 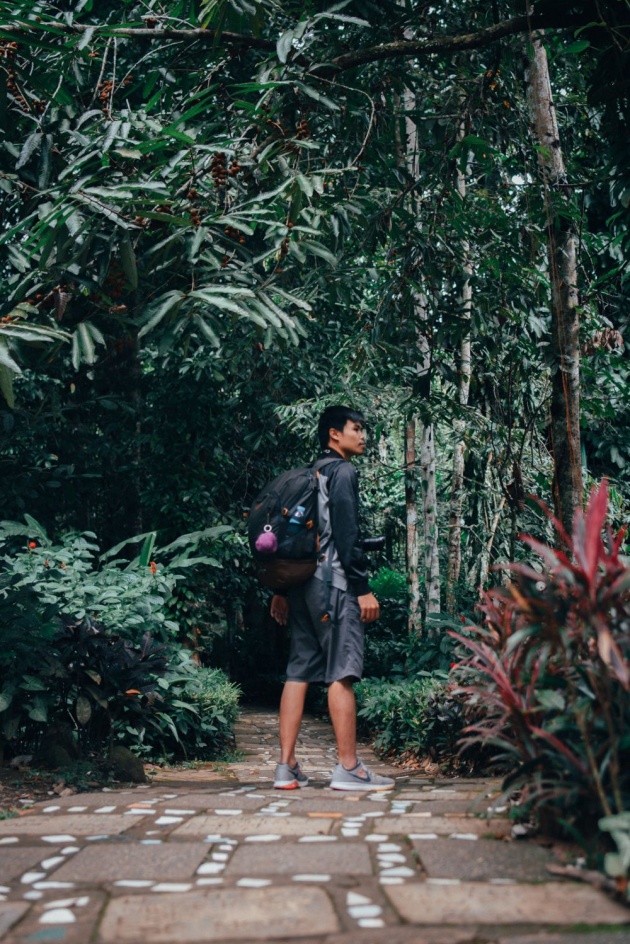 Currently, there are only two areas which are accessible to the public, the closed canopy and the plaza or the exhibit area. However, the rest of the functional areas are divided for the conservation breeding and food stock. But together with the two areas, there are also facilities which can be accessed by the visitors. 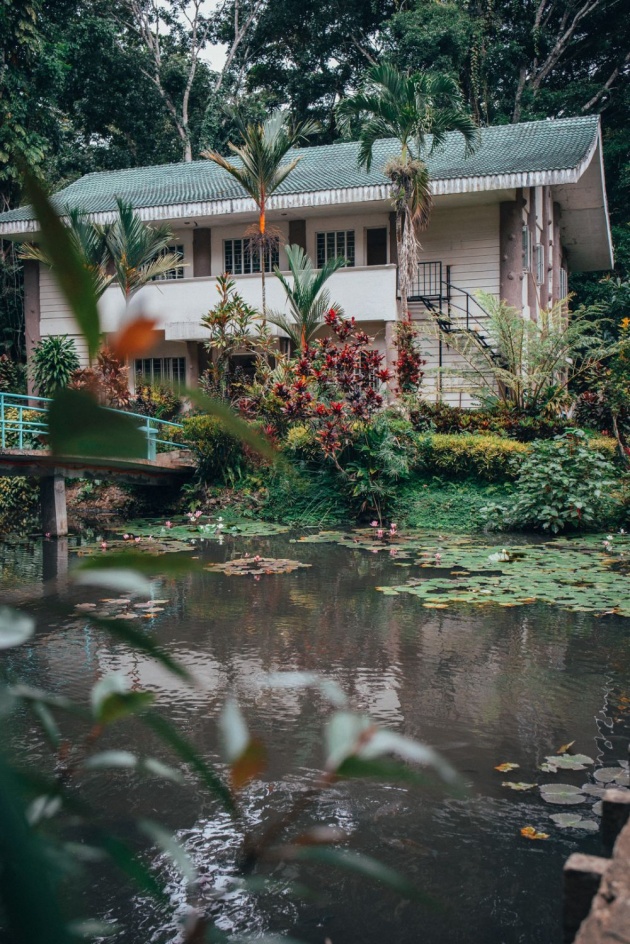 This part right here is where the guests could pay for their entrance fees, take photos with the photo wall, enjoy the view of the lake where there are lots of fishes as well as lotus flowers. There's also a building in front which hosts the staffs and other facilities of the center.

Snacks and refreshments can be bought as well in here. This serves as the entrance and exit area so guests can unwind here before and after the tour.

Right before entering, visitors, young or adults have to sanitize themselves by the provided disinfectant liquids. Aside from that, everyone is also required to step on another disinfectant for the footwear.

A souvenir shop is also available for those who would like to bring home some gift items inspired by the Philippine Eagle. I bought three refrigerator magnets. While there are more items such as Tshirts, stuff toys, mugs and a lot more, paintings and sketches of the Eagles are also there. 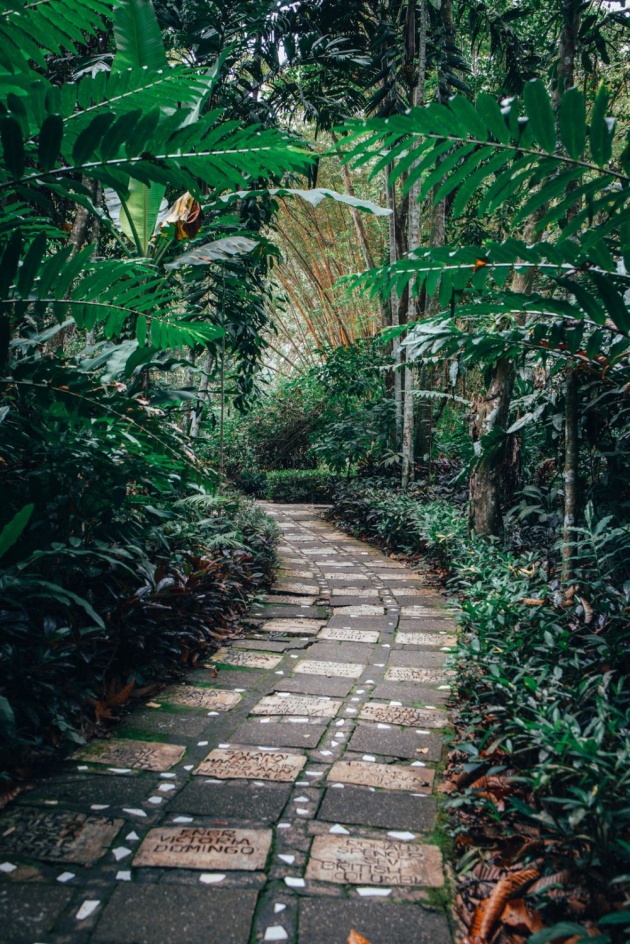 This is a natural forest which is adjacent to the Malagos Watershed. It is also important to note that this area here in Davao is actually cold compared to that in the main city. Probably due to the forest, so upon entering the close canopy section, it felt like we were really going into a forest, the trees are thick, the floras are growing here and there and we only have to follow the pathway and the signages to locate the areas where the Eagles are situated.

Silence is required here as Eagles have different personalities, some don't want to even see humans! But it was a rejuvenating experience to get into this trail, we heard a lot of birds chirping and Eagles calling out, their voices sound like they were calling someone, their parent or friend perhaps? 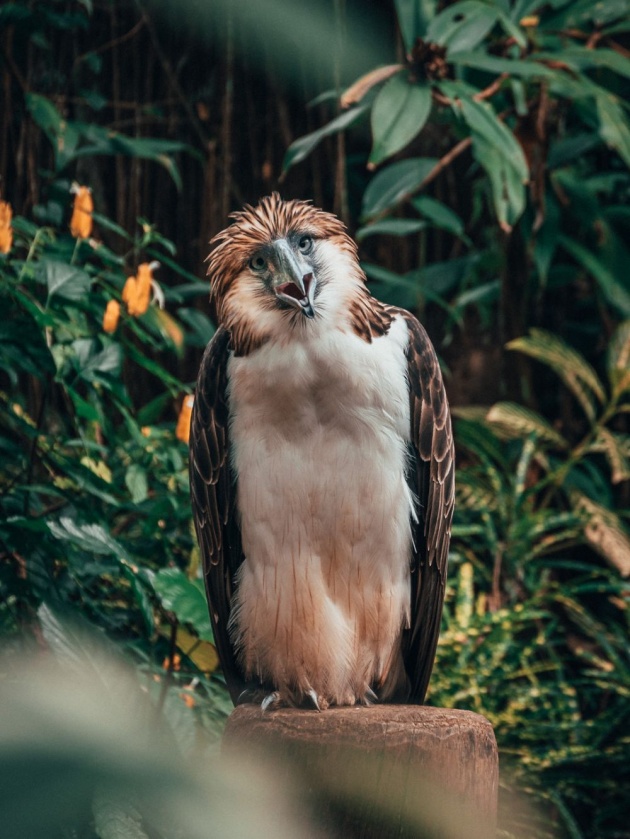 We found Pag Asa, the first ever successful hatch using the Cooperative Artificial Insemination Breeding Method by the center. Pag Asa just recently celebrated its 27th hatch day or birthday on the 15th. It's a milestone for the Philippine Eagle Foundation to have Pag Asa alive and also now having its own line, a female Eagle named Mabuhay.

There were more Eagles around, I noticed their name prints also carry adoption information such as Pag Asa being adopted by Pilipinas Shell Petroleum Corporation in 2014 from the day it was hatched. Thirty-three Eagles are adopted by different companies and individuals like Kuya Kim Atienza and his family. Even the Prime Minister of Japan also adopted one which he named Sakura but it died of snake bite.

Plaza or the Exhibit Area 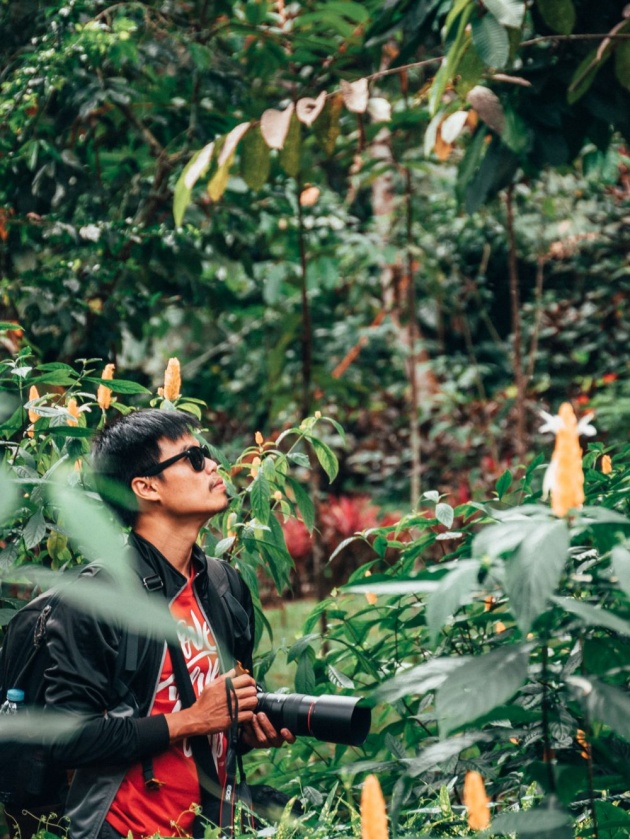 Here's an open canopy with concrete pathways leading guests and visitors to different enclosures or benches. It also houses the different facilities such as Diola's Forest, and the audio-visual room where there are several videos and documentaries being filmed to give information and lasting impression to the guests about the importance of Eagles to our country and even to the entire world. 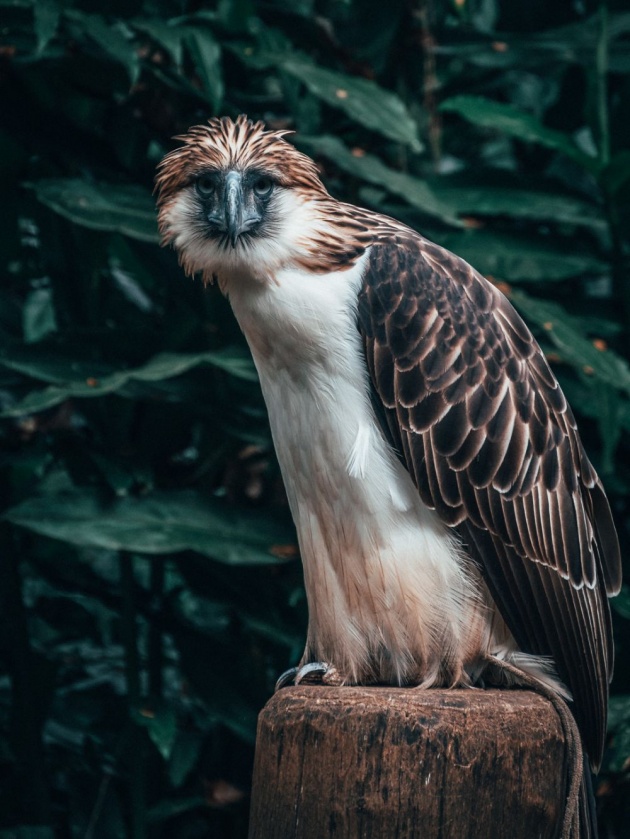 During our visit, we only did a walking tour without any guide. But I highly suggest that guests get a guided tour which will help each one to become more educated by the lives and facts about these Eagles. This is free actually and it is the guest's discretion if they'll give tips and donations.

Every now and then, the Philippine Eagle Foundation's social media account announces bird watching activities where several wild birds can be seen within the area. Each guest has to bring their binoculars to have a clear vision of these birds.

Wild trails, on the other hand, is a paid service where those who would want to have their name engraved in the center's concrete path could pay Php 500 which is another help for the conservation of the Eagles. The same goes with Tree of Hope. For Php 100, the supporter sponsors one seedling under the Arakan Forest Corridor Development Project.

How To Get There? 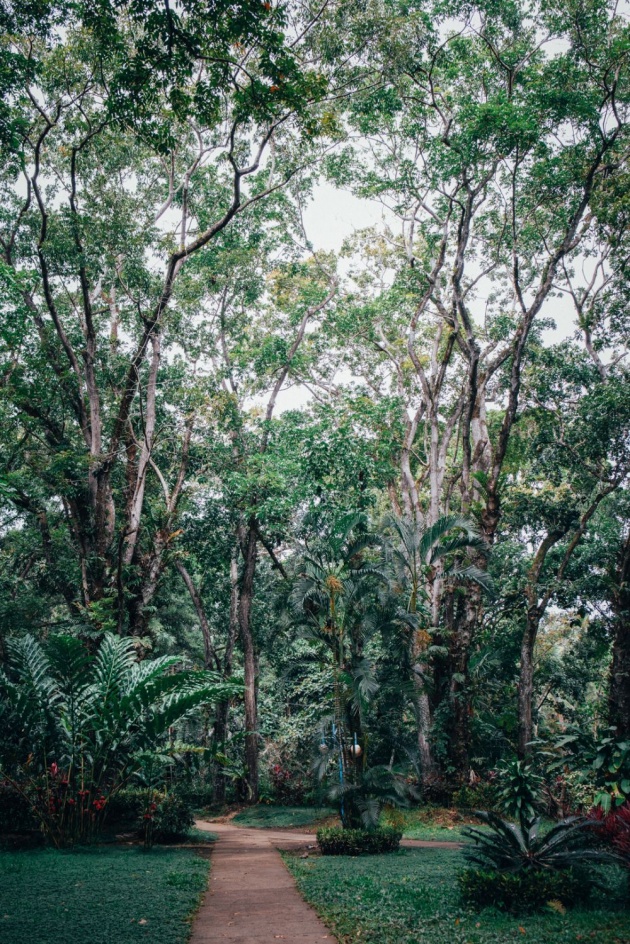 From Davao City, there are many ways to get to the Philippine Eagle Center, be it be private ride or the public means.

But as for me and my husband, we rented a motorcycle for three days which served as our personal vehicle during the entire trip. It took us around 45 minutes traveling from the main city to Malagos, Baguio District following Google Maps.

Google Maps showed us a route which had a faster route but I don't recommend this because the road isn't 100% smooth plus there are several areas which have a very bad foul odor. It is better to travel from the highway.

You may opt to get a van too for the entire family or group if you are traveling together or get a cab but that would be a little expensive.

For those who want to commute, based on my research, there are buses that depart every 15 minutes from the Annil Terminal, bus fares are priced at Php 30. Upon reaching Calinan after an hour or so, take a trike to PEC, this is only around ten minutes ride and will cost Php 6. In total, that's Php 36 only! 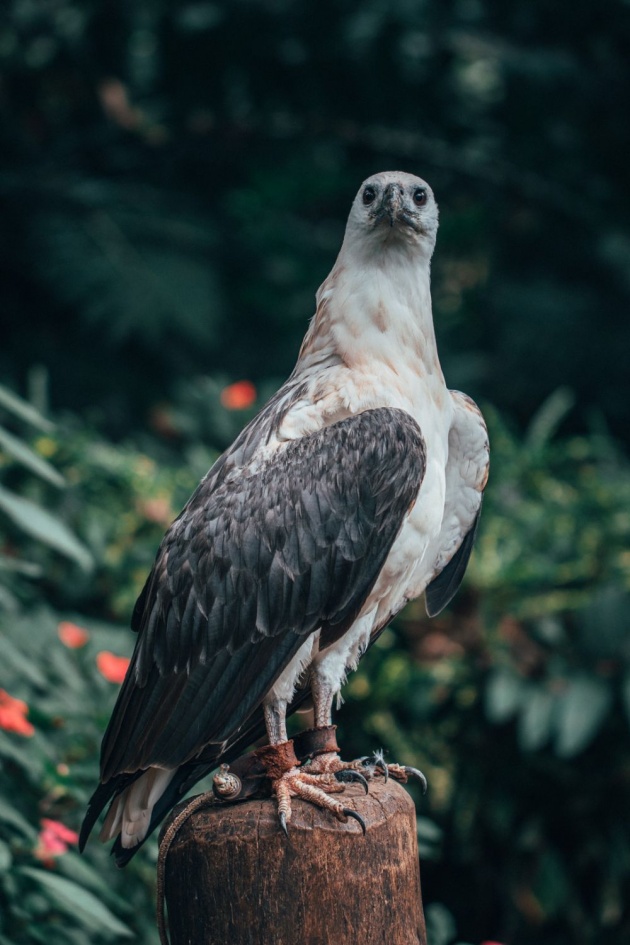 The experience of seeing these mighty animals is indeed a treasure I would cherish forever. I wish to see one in the wild in the future, for now, it is already a blessing that I have seen these birds, the biggest bird in the entire world, we as Filipinos have to be proud of such bird residing in our forests.

True enough, only proper education and support from each Filipino citizen can stop the poaching and hunting of our precious endangered Eagles.

Video credits:Alneil Dale LopezviaYouTube Previously, I talked about how we traversed from Malagos G…

Stayed at a Teepee House in Highway 81 Resort