Australian Immigration Minister Peter Dutton said the move would allow refugees there to "have a fresh start".

Australia made a 2013 deal to provide PNG with aid if it agreed to house a detention centre and resettle refugees.

Australia sends asylum seekers arriving by boat to camps in PNG and the Pacific nation of Nauru for processing.

However, conditions in the camps have been strongly criticised by UN agencies and rights groups.

"The PNG government has shown... its commitment to permit those found to be refugees to get on with their lives and have a fresh start in this dynamic nation with a growing economy."

In the 2013 deal struck with the Labor government of Kevin Rudd, Australia agreed to pay the Pacific nation about AU$400m (US$300m; £200m) in aid in return for PNG housing and eventually resettling refugees.

The move was aimed at deterring asylum seekers from trying to reach Australia's shores by boat.

The Manus Island centre has since suffered periods of unrest.

Riots broke out in February 2014 when local residents entered the facility and clashed with detainees. One asylum seeker was killed and at least 70 were hurt.

Earlier this year, detainees in one part of the camp barricaded themselves inside their compound and went on hunger strike. 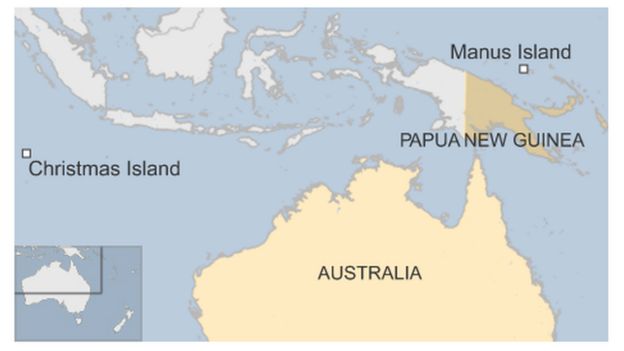