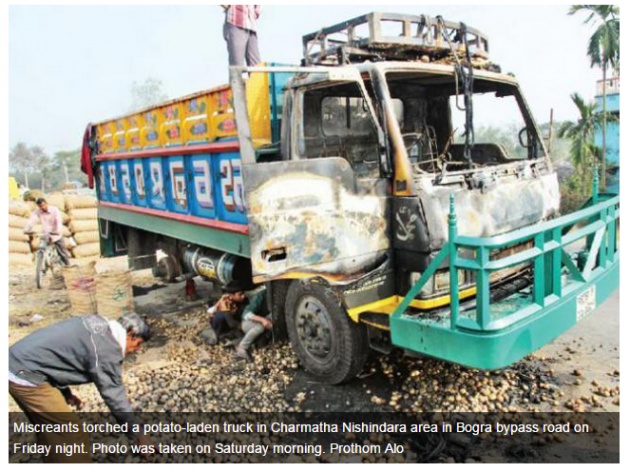 The increase in revenue collection till November was only 14 percent, as against the target at 24 percent.

Researchers said the revenue shortfall would be over Tk 25,000 crore at the end of the financial year.

As exports went up relatively in December compared to November, the growth exceeded one percent for the first time in six months. Yet there are apprehensions about January.

Apparel production has fallen by 30 percent, according to Bangladesh Garments Manufacturers and Exporters Association (BGMEA).

The apex trade body, the Federation of Bangladesh Chambers of Commerce and Industry (FBCCI), at a press conference on Saturday, said that non-stop blockade has caused a daily loss of Tk 200 crore in the transport sector alone.

If exports fall, this will have an impact on employment. And if there is a significant deficit in revenue collection, this will hamper the government's development planning and expenditure, which will have an overall detrimental effect on investment and GDP growth.

The government has fixed the revenue target for the current 2014-15 fiscal at Tk 1,89,000 crore. However, the growth in revenue collection is steadily declining.

According to the FBCCI, the lion's share of revenue comes from the private sector. But under the present conditions, production, imports and exports are being affected adversely and this will have a negative impact on fulfilling the revenue target.

AB Mirza Azizul Islam, a former adviser to the caretaker government, told Prothom Alo on Saturday that the government will not be able to meet the revenue target it fixed for this fiscal. Whatever revenue could have been collected is now uncertain because of the political situation.

Businesspeople have said that the prevailing political situation is hampering local investment. This will cause the foreign investors to lose interest as well.

This is affecting the commodities trade too. The winter vegetable farmers are suffering as they cannot send their produce to the city markets.

Mustafizur Rahman, executive director of the Centre for Policy Dialogue (CPD), has said, "Such political crises have a negative impact on both short-term and long-term economic activities. If the present situation continues, the prices of essentials will increase and the consumers will suffer. The producers will suffer too and exporters will also come under pressure."

The crisis in supplies is forcing various industries to cut down in production too. Kamruzzaman, marketing director of Pran (RFL), the largest food processing and plastic goods manufacturer of the country, told Prothom Alo yesterday that they had had to cut production down by 20 per cent. Under normal circumstances, every day an average of 700 trucks carry their products to various places around the country, but due to the blockade, 400 to 450 of their trucks cannot ply the roads.

Shahidullah Azim, vice president of BGMEA, said, "The post-Christmas orders for the garment sector are due to come in now, but the orders may fall due to the political crisis. Many of the clients are asking us to go to Hong Kong or Thailand, rather than they coming here. Thus, just as production costs are going up, the buyers are also getting a negative image about Bangladesh. This will have an adverse impact on the sector in the long run."

According to Bangladesh Knitwear Manufacturers and Exporters Association (BKMEA), the unwarranted violent political situation is hampering the country's development. If this situation prevails, it is doubtful whether the GDP will remain at 6.5 per cent at the year end.

FBCCI, at an emergency press conference, has called for the blockade to be ended. The federation president Kazi Akram Uddin Ahmed said, "If there is any legal provision to stop such programmes, such measures will be taken. The legal angle is being examined."

CPD executive director Mustafizur Rahman said that if the on-going crisis is extended, this will have an overall negative impact on implementing the development programme, employment, production and the overall economy. It will then be difficult to reach the targeted growth.