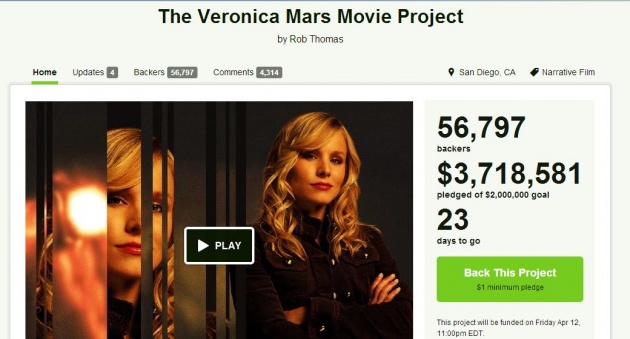 Launched a week ago, a Kickstar fundraiser started by creator and executive producer of Veronica Mars, Rob Thomas (not to be confused with the lead singer of Matchbox Twenty), who was looking to gain $2 million for a Veronica Mars film.

Thomas wrote this in his fundraiser request:

And within 11 hours it reached it's goal thanks to the project going viral.

With more than 56,000 backers and almost $4 million of funding, there is no doubt Veronica Mars fans love this idea. Hooray for crowdfunding!

As to what the copyright holders of the show, Warner Bros, think about a piece of their enterprise being made without them, Rob Thomas had to say this about it:

"Of course, Warner Bros. still owns Veronica Mars and we would need their blessing and cooperation to pull this off. Kristen and I met with the Warner Bros. brass, and they agreed to allow us to take this shot. They were extremely cool about it, as a matter of fact. Their reaction was, if you can show there’s enough fan interest to warrant a movie, we’re on board."

Another win for the Veronica Mars fandom.

If you aren't quite sure how crowdfunding works, here is the scoop behind the popular fundraiser Kickstarter.

Anyone looking to gain funds for a project or cause can create an account and page for their project.

Once you've filled out the info for your project/cause, added a video and/or pictures to further explain your cause, and chosen the perks for the people who fund your cause, you have until your deadline to fund your entire cause  or you will not receive any of the funds. Indiegogo, on the other hand, allows you to receive the funds as soon as someone gives money to your cause.

Either way, crowdfunding is a fantastic alternative to loans, and it's more about people who support your goal.

Here are some of the awesome perks available for those who help fund/pledge The Veronica Mars Movie Project.

How much will you/did you pledge for The Veronica Mars Movie Project?

What movie(s) made from your favorite television series would you want to see next on Kickstarter?