Popeye and Sindbad: Together at last!

Truth be told, as a kid I didn't like Popeye cartoons. I found them to be too blatant in their advertising of spinach, and I sure did not like spinach at all! I also thought they were repetitive and formulaic. Perhaps though, looking back now, I just wasn't seeing deep enough past their trappings to the awesome artistry within. Now I like Popeye cartoons, especially the ones done by the Fleischer brothers. 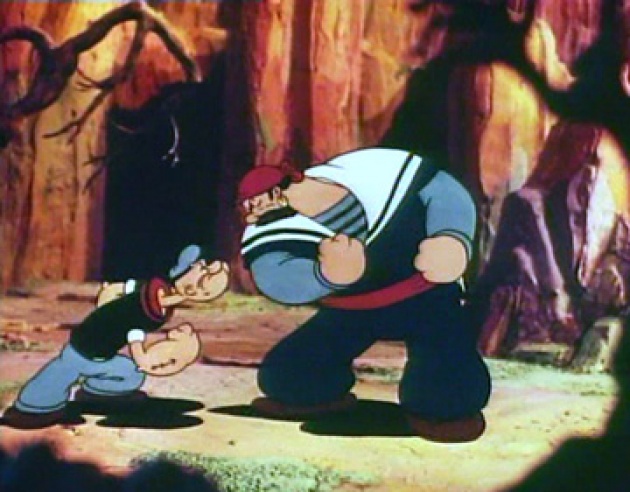 Here we have an epic two reel color 1936 Popeye cartoon in which he meets that legendary other sailor, Sindbad! The story begins on the mysterious 'Isle of Sindbad.' A sign proclaims 'BEWARE!' and is surrounded by hissing snakes. The 'camera' pans around revealing barking guard dogs and fierce lions. But that's not all! Then comes a fire breathing green dragon, a snarling vulture, more dogs, more dragons and so on. It's a veritable animated menagerie of scary animals, all done in that excellent round tube-like Fleischer style.

All these animals guard a tall stone castle. The castle belongs to Sindbad who in this cartoon is 'played' by Bluto, Popeye's eternal enemy. He sings an explanatory song full of bad whale jokes (he even breaks the fourth wall once ((or, perhaps, breaks the fourth paper(((?))), as it's a cartoon!)) to tell the audience that it's not a bad joke, though it is!).

Now it's a little bit into Bluto/Sindbad's song where things get AWESOME. He steps away from his castle and in the next shot he walks into an actual, three dimensional table top miniature island set. Yes, that's right...He goes from being an animated character in a flat drawn context to suddenly being a drawn animated character walking around an actual dimensional miniature! It's a wild effect and one that boggled my mind when I first saw it when I was a kid. 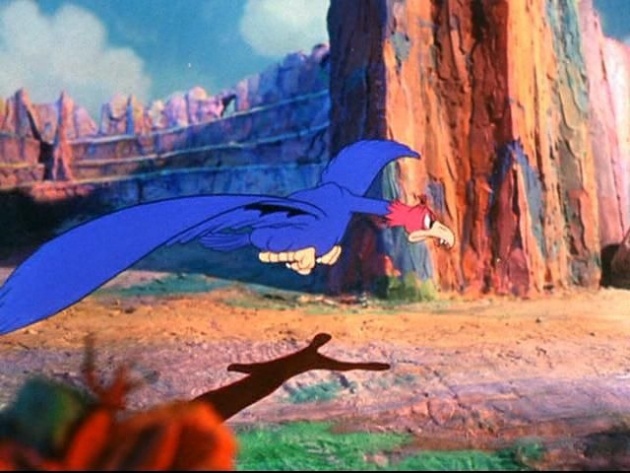 The detail on the background miniatures are excellent and really make the animated characters around it pop out wildly. I can't overstate enough how cool this effect is! And if you don't believe me, you'd better believe Ray Harryhausen who said in one of his effects books that this cartoon was a major influence on his work in his film 'The 7th voyage of Sinbad!"

So by all means check out this wildly inventive cartoon, full of both excellent drawn characters and monsters, and excellently designed and sculpted miniature sets!