How are you all there?

After the successful review of the Bollywood movie Diljale, today I would like to present the review of a Pakistani movie titled  "Punjab Nahe Jaungi". 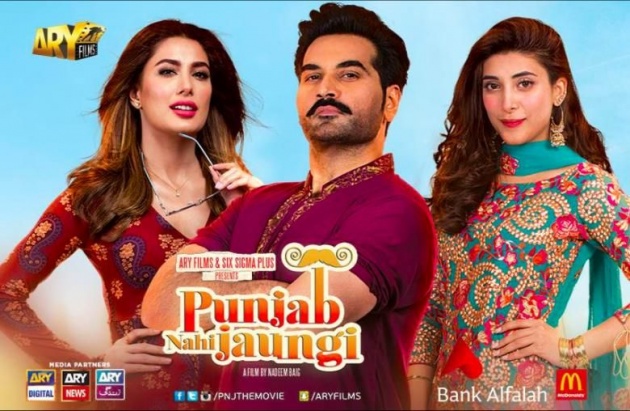 Dear friends, If you have not yet visited my previous submission then you may see it below here;

The movie "Punjab Nahe Jaungi" is directed in Pakistan and got wonderful publicity from the audience. The movie was really wonderful and presented a great story. Humayun Saeed was the major actor of this movie whose acting is mind-blowing. He showed a really great performance. His style of speaking was very great and heart touching. Mehvish Hayat was the main heroine of this movie and her acting was also great. Other actors also showed great performance.

The story revolves around Fawad Khagga, who dreams of finding a girl to love. His cousin, Durdana Butt loves him, but Fawad does not. He goes to a Pir and asks him to help find the girl. Meanwhile, Amal Dastoor arrives from London after completing her masters in Economics. Firdous Khagga really likes Amal and wants her to marry her son Fawad. She sends a picture of Amal to Fawad, and he instantly falls in love with her. She talks to Mahtaab Khagga to get Amal to marry Fawad. Mahtaab talks to Amal but she rejects immediately; as she likes her friend Vasay, who is coming to Pakistan to marry her. Vasay, whose parents are divorced, works his way himself to buy an apartment. Fawad and Amal finally meet and he tries to propose to her. He does not take rejection nicely and is headstrong so he comes back to Karachi and messes with her love life, offering her cows and land. She agrees and thinks her friend Vasay doesn't love her because he can't give her his only property before marriage.

The following actors showed great performance in this movie and now I would like to introduce them to you.

Humayun Saeed is known as Fawad Khagga in this movie and he is a rich guy who recently has come back from Lahore and completed his degree of M.A Politics. He is very happy after coming back to his family. He is confident and he wants to find a girl who falls in love with him and for this purpose, he also visits Heer mazaar.

Sohail Ahmed is a very famous comedian and he is also known as Azizi. He is working in this movie as Mahtaab Khagga and he is the head of the family. He is the grandfather of Fawad Khagga and he loves him a lot. He is fond of music parties and especially Mujra party.

Mehwish Hayat is a beautiful female actress and she appeared in this movie as Amal Dastoor. In the start, she loves a guy who is her classmate in London and she is very close to him but later on due to some problems and conditions, she agrees to marry with Fawad khagga who is also her first cousin. She falls in love with him very soon.

Saba Hameed is known as Firdous Khagga and she appeared in this movie as the mother of Fawad Khagga. She is also planning to marry Fawad with her niece Amal Dastoor. She is a nice lady and her acting is marvelous.

Urwana is a nice actress and she is hot too. She appeared in this movie as Durdana Butt. She is also a cousin and close friend of Fawad. She loves him and wants to marry him but Fawad does not love him. But she continues and remains close to Fawad.

Ahmed Ali started his career in 1990 and he is known as Rapper, Musician and also an actor. He is working in this movie as Shafique Ahmed and he is a close friend of Fawad Khagga. He is a good friend of Fawad and he helps him in all matters but gives him good decisions.

Waseem Abbas is known as Jawad Khagga. He is the father of Fawad. Jawad Khagga is the husband of Firdous Begum and he fears from his wife. He is also a son of Mahtab Khagga.

Azfar Rehman is a great actor who has shown his brilliant performance in many movies and also in Drama serials. He has appeared in this movie as Vasay. He is the guy who lives in London and Amal loves him and she wants to marry him but due to some problems, she leaves him.

Behroze is a great Pakistani voice actor and television actor too. His acting style is very good and he has worked in many television dramas and movies. In this movie, he is known as Dastoor Ahmed and he is the father of Amal Dastoor.

These are some major actors and actresses who have worked in this movie and made this movie wonderful and joyful.

The movie is about Fawad Khagga who has done M. An in politics and recently came back to Faisalabad. Fawad wants a girl who actually falls in love with him and for this purpose, he also visits the shrine of Heer. Fawad's mother Firdous Begum visits her relatives in Karachi known as Bibo G and she wants to marry Fawad with Amal Dastoor.

After some issues, Amal agrees to marry with Fawad Khagga. The marriage is made but due to harsh words of Fawad, Amal gets angry.

Fawad jumps from the roof and gets injured. Amal agrees and falls in love with him.
The story forwards and due to work at home and in office, Amal is not able to pay time to her husband and Fawad moves towards Durdana Butt. Amal looks at them and becomes angry again. She makes the decision to get the divorce from Fawad.
At the end of the movie, Fawad signs the paper but Amal changes her decision and comes back into the life of Fawad Khagga.

The story comes to an end with a happy mood.

The movie is rocking and makes a great the end. The movies show real love among the families and tell us the real meaning of love. The love between family may lead to fights due to bad relationships and may also be helpful in increasing love.

Here is a Querlo chat survey for movies;

Hello dear friends, Welcome to my first C blogging article and I would like to describe the Joint Fa…