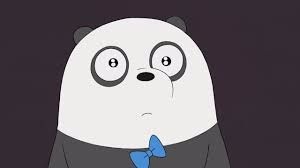 The episode begins in a market, bears receive free samples of each trader are there, when one of the vendors gives Panda for a free cookie, this not knowing what they were prepared cookies eats and trader tells that cookie was made of nuts, then faints panda. Brown realizes what happened to his brother and runs panda and tells him to speak, Panda could barely speak, when suddenly a girl screams and jumps Panda and takes a drug injected panda and so recovered.

Upon awakening, Panda looks at the girl and she asks if he's okay, Panda suddenly begins to imagine that his girlfriend and begins to sing you a flash. Until Polar throws a bucket of water on her face to wake up and Pardo him up and speaks to recover, when Panda is improved, Pardo thanks the girl who saved Panda and asks him how he knew he had to do, she said that her brother also happens and she says her name is Lucy Produce, and Pardo asks Lucy should accompany them to throw stones into the river and she accepts.

Then the bears go on a truck next to Lucy and reach the river, where they begin to throw huge stones with Lucy, run, and play but Panda realizes that Lucy they like more Polar and Pardo that he, reach the cave, Lucy tells Pardo who wants to go with them to a new Italian restaurant, what he accepts. Upon entering the cave, Brown and Polar are happy to go with Lucy to the restaurant, but Panda is angry and locks them in the closet, he goes only to the appointment and come to the restaurant where Lucy awaits you with a blue dress. Panda falls over her and listening to music "You're a Flash" again, sit at a table to sort and Panda realizes that his brothers are standing outside watching them in the window and he gets scared, Panda and Lucy ordered some lunch and Pardo and Polar try to enter but crowded restaurant, so go in the kitchen and inadvertently become waiters and when Panda sees catches Lucy's hand and takes it to the corner of the restaurant where closes shrubs so that your brethren do not see. Panda and Lucy begin to run around the restaurant to avoid the bears they sit at a table in place and hide under the table, Lucy asks him why he does that and just the waitress gives to Panda salad Lucy and he it eats without knowing containing nuts and faints.

Panda wakes up in the hospital and his brothers are there, Pardo says he suffered a problem with allergy wallowed in the table, fell wondered if I forget something that Lucy was there to let lunch, Panda said he liked Lucy Pardo said that if he had said earlier would not have stood in his way the episode ends with bears hugging Panda and Pardo says he just had no chance with Lucy.