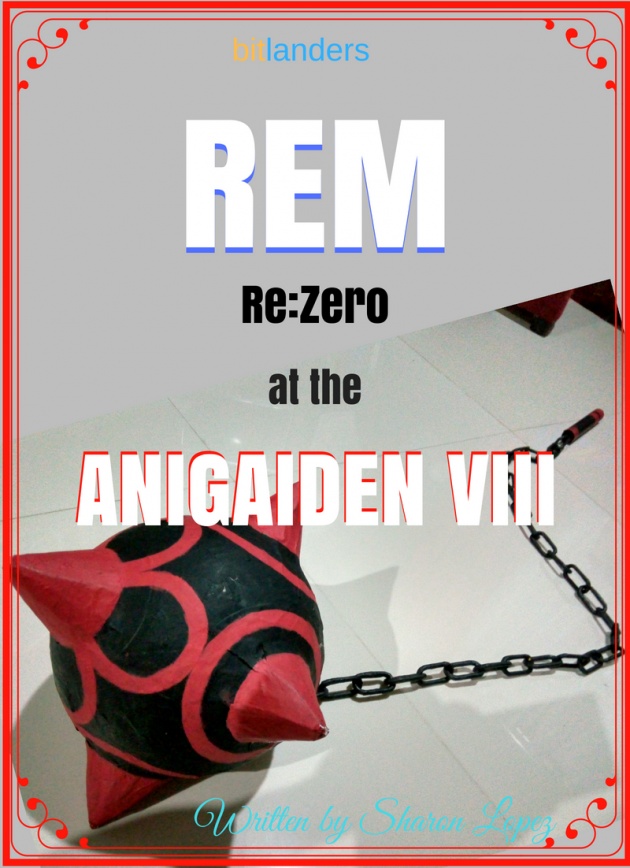 This is the weapon of Rem. They called it Morning Star. My niece made this out of a rubber ball covered with paper mache and attached to a black plastic chain. According to my her, they couldn't find a black chain so this one was painted. I choose this photo for the Blog Graphics to showcase her creativity.

Today's topic is very special as I am writing this for my adorable niece who made her way to the Cosplay event, Anigaiden VIII which was sponsored by the provincial government of Albay, in the Philippines. 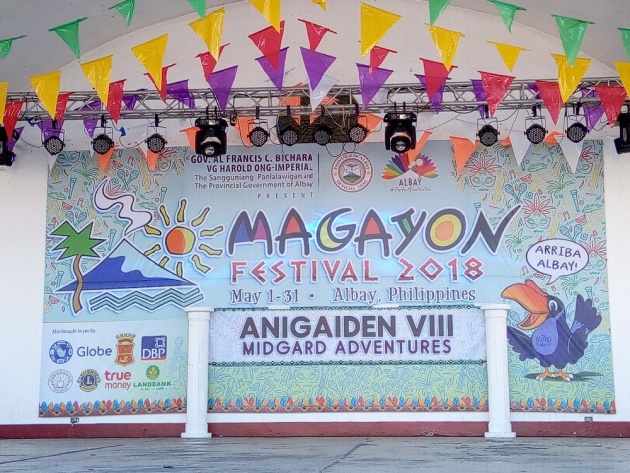 Calling all anime lovers out there! The author has a little knowledge about anime so I am going try my best to give justice to this post. Hope you enjoy it!

"Make sure the hairpin is visible after putting the headband."

This is the scene at our home before the start of the Cosplay competition. My sister, who came in from another province will be allowing her eldest daughter to join the competition and everyone was busy preparing for the great event. I found it amusing watching them having a lot of confusion over the things they needed.  A little argument would arise from time to time. Well, that's normal and they look quite funny and cute, should I say. 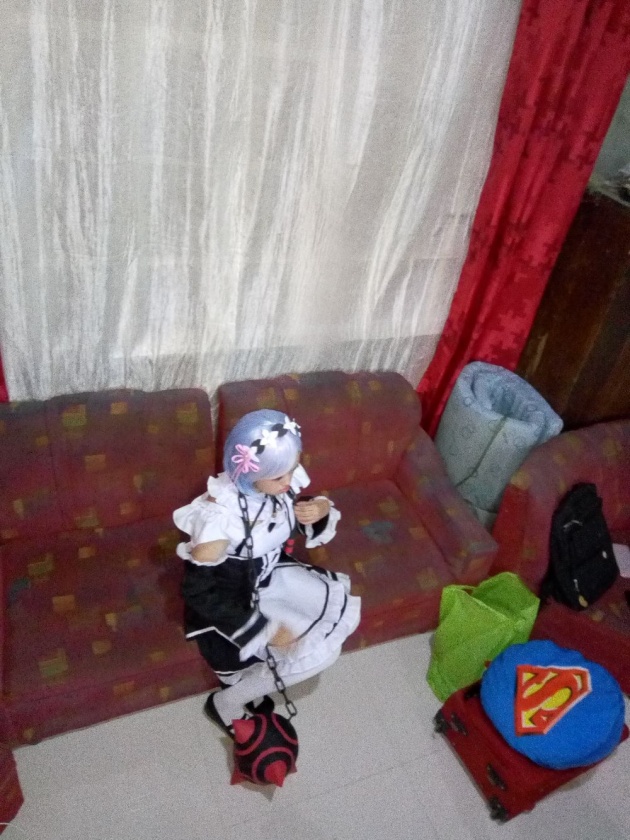 Cosplay or Cosplaying has started to become popular in our place in 2010. My daughter used to join competitions in 2013 and 2014 but she decided to stopped joining when she entered college. She played Haruhi and Sakura in different events.

Cosplaying is an expensive hobby because you have to buy everything from hair down to the shoes as well as accessories such as weapon and other props. You must copy the exact appearance of the character you wanted to cosplay. Since during that time, cosplaying was only starting, we found it a daunting task looking for the needed accessories especially the hair. The most that we can see around the malls were blonde and black synthetic wigs. There were also green wigs but that was very seldom to see such. There was an instance when I really had a hard time finding the hair for Sakura. The character has a pink hair and we could not find one in the stores and even in the mall in our place. What we did was, we bought a hair coloring and tried to color a white wig. It was not a good idea; the color was not sticking on the artificial hair. We ended up using food color.

Apparently, cosplaying is a combination of different skills, ability, and talent. It is a good activity because it can boost creativity and resourcefulness among the young generation.

Moving further, my niece who will be joining today's event will be cosplaying Rem, a character from the anime series, Re: Zero. 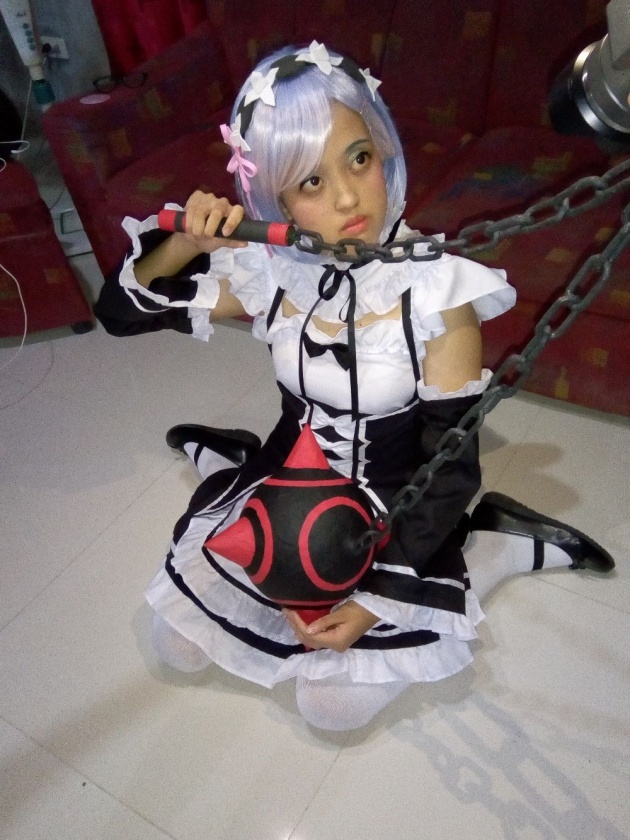 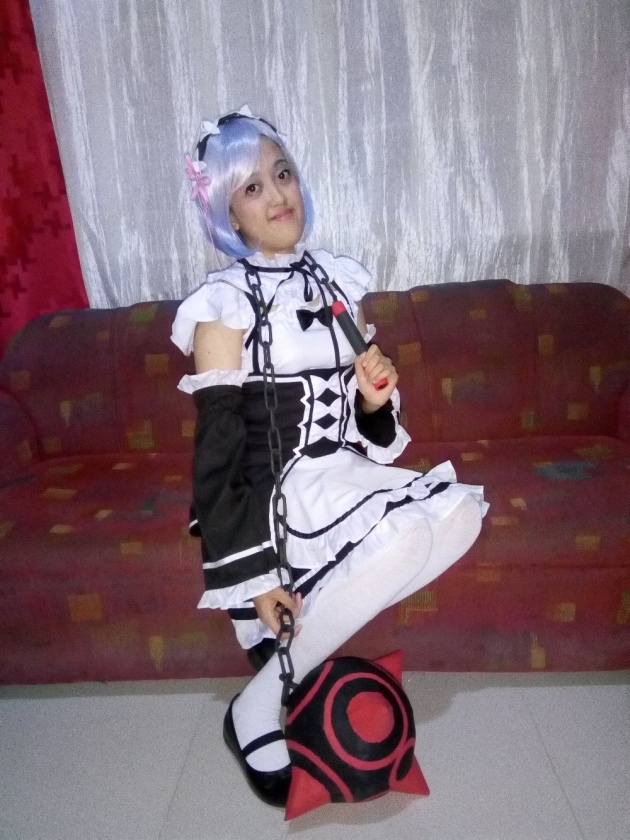 Rem has a medium length sky blue hair that covers her right eye, large light blue eyes, and young features. She also has hair clips towards the left side of her hair, flower-shaped ribbon on the same side of her hair, and a maid hairband. She looks nearly identical to her sister, Ram, apart from her hair, eyes, and ribbon coloring. She usually wears a maid uniform, and since her chest is slightly larger than her sister's, she secretly changes the measurements to hide it. Source

My niece's friends were the one who helped her during the preparation.  They assisted her with the hair which needed to be braided in order to keep the wig in place. They helped my niece changing the clothes as well.

We started taking pictures afterward. I saw how my niece's friends showed their support. When everything is ready, we proceeded to the venue which is just a few blocks away from our home. 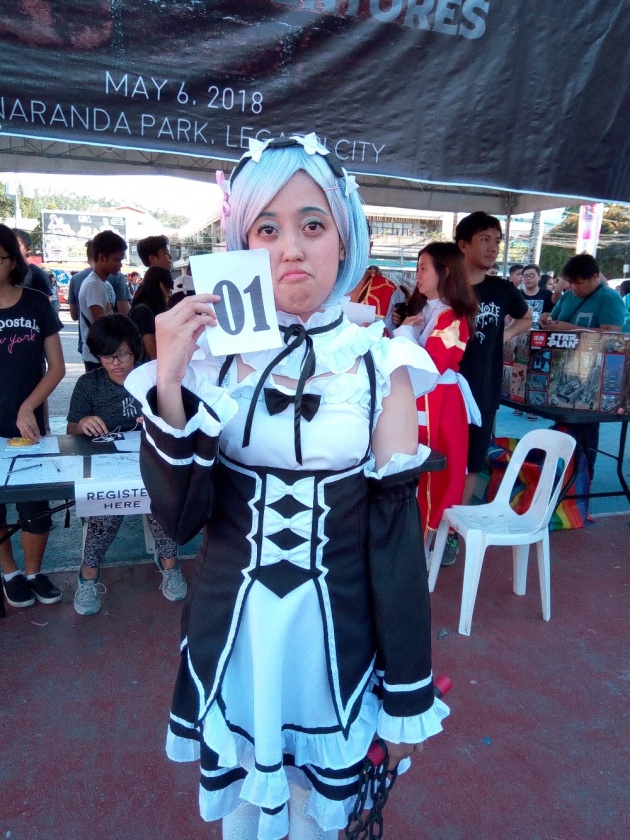 Being the number 1 contestant is challenging!

There were several people at the park. Some were wearing costumes too. Some were familiar, but most were not. It has been some time since I stopped watching anime shows. Moreover, since my daughter is already in college, she had to devote more time to her studies and she seldom talks about anime.

There were several booths showcasing some products related to anime and cosplaying. Participants were given star stickers which they would have to paste on the booths of their choice. The booths which will receive most stars will win the best booth. There are also food items which the guests and participants could buy.

We requested from some of the cosplayers to take their pictures and we weren't disappointed. We took photos of some of the participants. 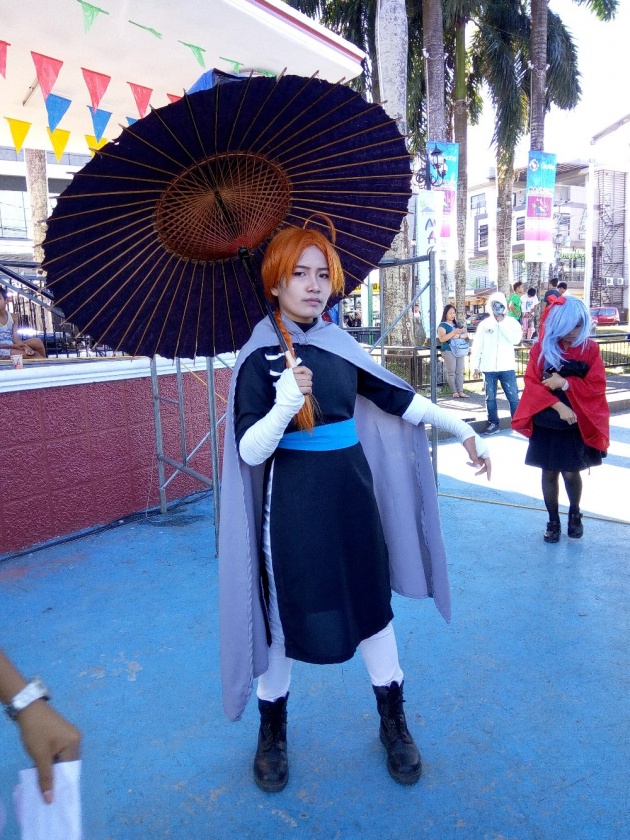 This Kamui, the brother of Kagura, from Gintama 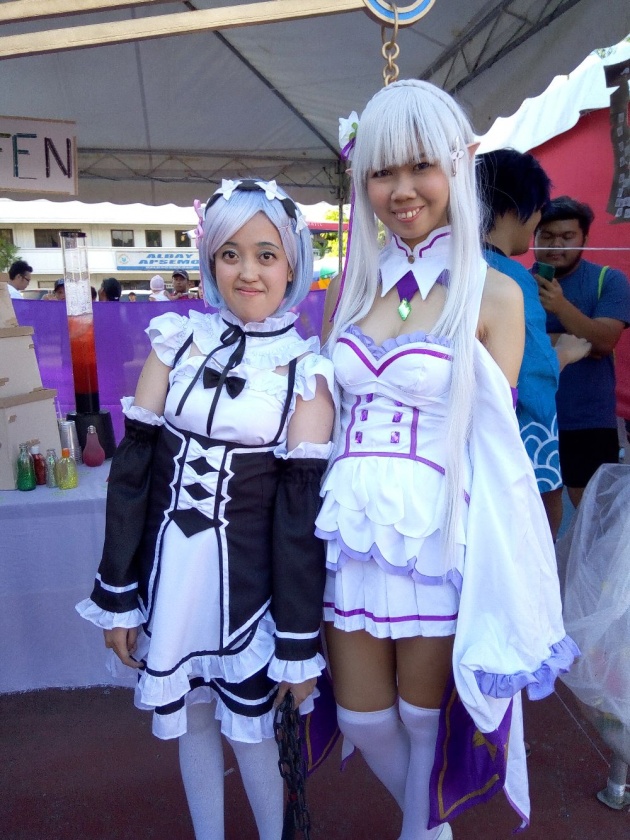 This is Emilia, the main heroine of Re: Zero 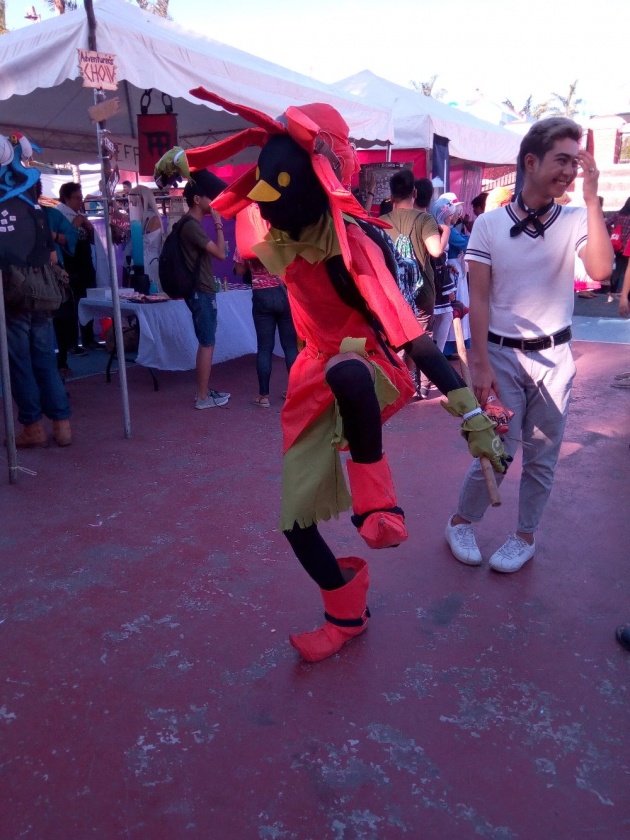 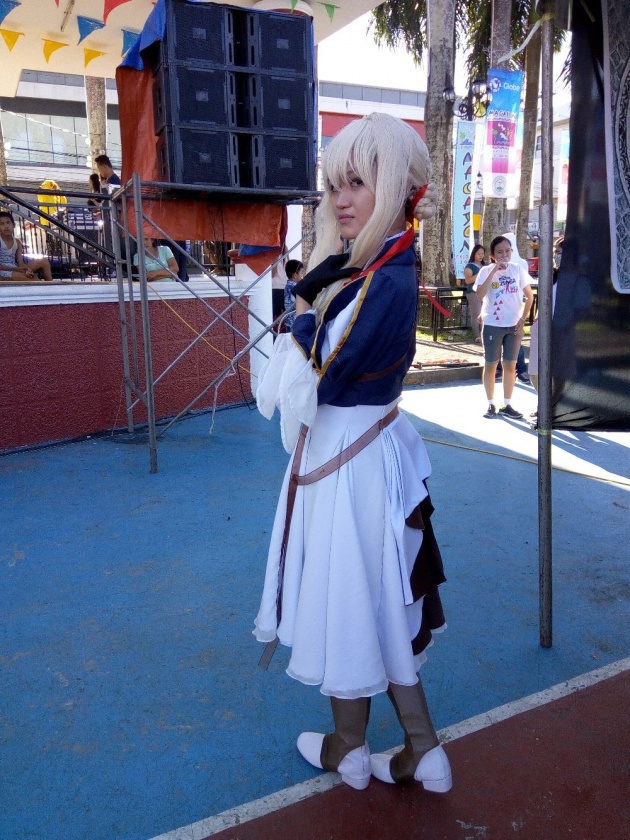 We waited for several hours before the program finally started. Since the event has been conducted at the public park, I felt the hot weather which is causing me to perspire all over.

The announcer started the program with a prayer followed by the singing of the Philippine National Anthem. A dance number was presented, and an anime song number was rendered by one of the guests. A few announcements were made relative to the rules of the competition. Every contestant was given 5 minutes to present their routine. The competition started, and my niece was called. She was the first participant. We were all nervous and excited as we waited her proceed to the middle of the stage. She walked around with the weapon, Morning Star. It is a metal ball connected to a long black metal chain. She walked around the stage platform and hold the end of the chain to create a circular motion which causes the ball to revolve. Finally, she smashed the ball on the ground causing a huge explosion as part of the props.

There were many people in the park who watched the event. It only means cosplaying is still a popular event in our place. Since it coincides with the Magayon Festival which is currently ongoing in the province, a lot of people are visiting the park because of the different products they could buy in the area.

On the Final Thought...

Watching the cosplay event certainly proved that indeed today' generation is composed of artistic and creative individuals. It was an awesome show!

Here is another video showing some cute moments with Rem. I have been trying to upload the actual video taken from the cosplay event but to no avail. It was probably because of my slow internet connection. The video has an English subtitle.

Thank you, everyone, for reading my post. Have a great day!

Meanwhile here is a Querlo Chat prepared just for you...

The author is the owner of: