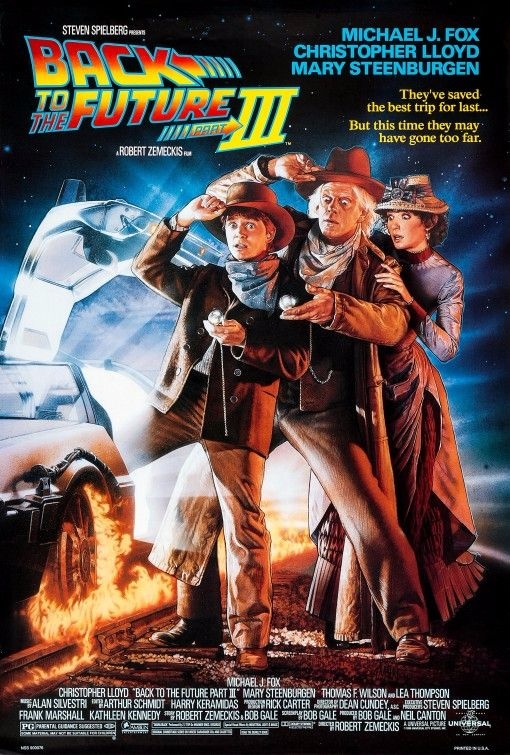 Young Doc: Well, good luck for both of our sakes. See you in the future.

Marty McFly: You mean the past.

Hi Everyone! Another Back to the Future blog which is the 3rd one and the last one. This blog would be quiet critical for the reason of I barely remember some stuff in the movie (stuff that I love the most) So please tell me if I missed something ~

Honestly, The Part 3 of the Back to Future is quiet sad and unrealistic, what makes it unrealistic? The over story telling of Mcflys' and Tannens'. but still, The best time travel movie ~ 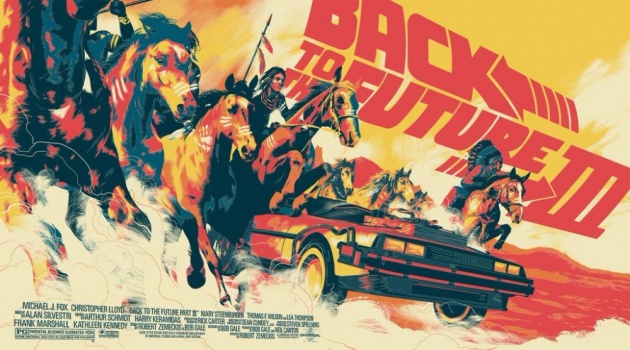 Join me as I explore another world of Back to the Future, Have fun and Enjoy!

Back to the Future Part 3

This is the Ultimate Time Traveling of Back to the Future, Let say that if it wasn't of this part, Doc Emmett Brown would still be wondering and exploring his own path without someone else companionship. But before anything else, let us reminisce the Story of Back to the Future Part 3. 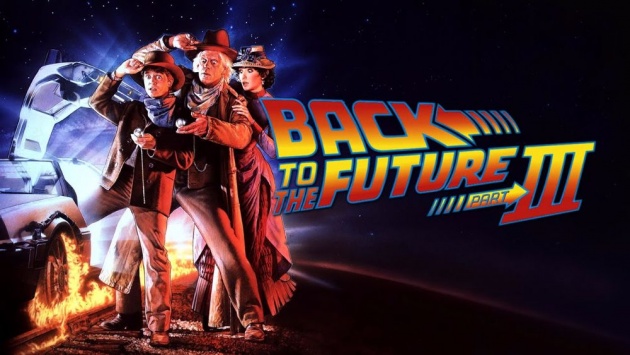 Image Source: Back to the future poster via youtube.com

In this final chapter, Marty McFly (Michael J. Fox) obtains a 70-year-old message from the time-traveling Dr. Emmett Brown (Christopher Lloyd), in which he informs Marty that he has retired to a small town in the Old West.

Yep, The Old West - the theme of which typically exaggerated the romance, anarchy, and chaotic violence of the period for greater dramatic effect. This eventually inspired the Western genre of film, which spilled over into comic books, and children's toys, games and costumes (via en.wikipedia.org) as what I have said a while ago, it is the ultimate time traveling of Back to the future, The setting and theme are more likely to circulate in the Old Western Era which make it more interesting ~ 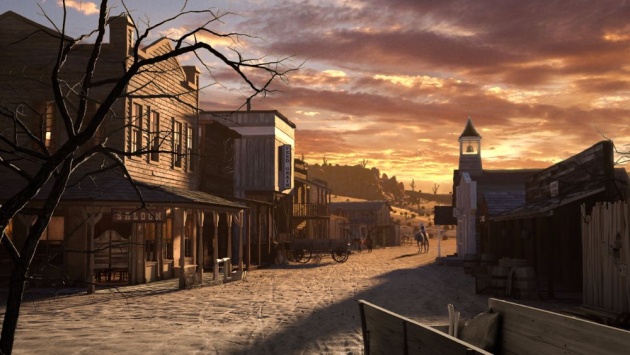 Marty then finds out that the Doc was murdered shortly after sending the letter. In order to save his friend, Marty will have to travel back in time, disentangle a lovestruck Doc from a local schoolmarm, and repair the DeLorean -- all while avoiding a posse of gunslingers.

If in the Back to the Future Part 1 and Part 2, The Tannens' are the bullies, here in the Part 3, Tannens' are still the Bullies, but this time it is more life threatening and occasionally speaking, more realistic. As you all know, Gunslinger are literary words used historically to refer to men in the American Old West who had gained a reputation of being dangerous with a gun and had participated in gunfights and shootouts (via en.wikipedia.org)

I love these scenes, The gun fight and everything. Marty Mcfly who learned shooting using a toy gun in an Arcade Game made his advantage towards his enemy and the people around them (Gun shooting is really a thing to them) which made him famous.

Colt Gun Salesman: Where'd you learn to shoot like that?
Marty McFly: The 7-11.

REMEMBER THE 'SAVE THE CLOCK TOWER'?

In Back to the Future Part 1, The Clock Tower in 1955 was struck by lightning (lightning struck the clock tower in Hill Valley, Calif. providing enough power to send Marty McFly and the DeLorean back to the future to 1985 - via google.com) and then in 1985, a mission to save the Clock Tower was held by The Clock Tower Lady ( represented the Hill Valley Preservation Society and collected donations on October 25, 1985 via backtothefuture.wikia.com) 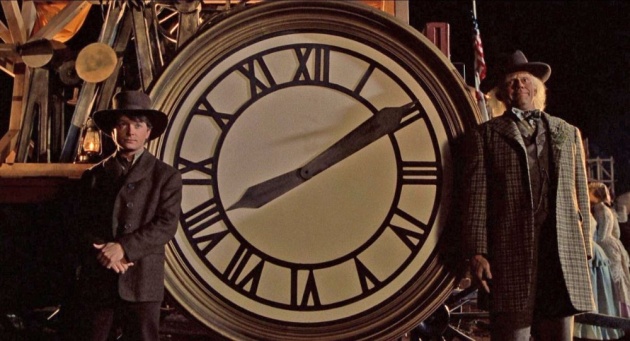 Remembering this Scenes made my Time Traveling expectation rise! They really connect all the dots in those 3 parts of Back to the Future which made it like it has more interconnection between the viewers and the character/story.

HOW ABOUT THE TRAIN?

Let me rephrase my sentences a while ago, If in Back to the Future 1, Marty and Doc successfully triggered the DeLorean Time Machine by the struck of the Lightning and in Back to the Future 2 which doesn't need any effort to travel because of the alternative for Plutonium (a transuranic radioactive chemical element with the chemical symbol Pu and atomic number 94 - via backtothefuture.wikia.com) which is trash/waste (Futuristic)

Then Back to the Future 3, in the year 1885, The DeLorean Time Machine has gain a leakage by those Indian who shot it by an arrow which unable it to travel back in time and that made Marty stuck in that year, They need to make it run until it hits 88 miles per hour. The only choices they had are Horses and a Train. 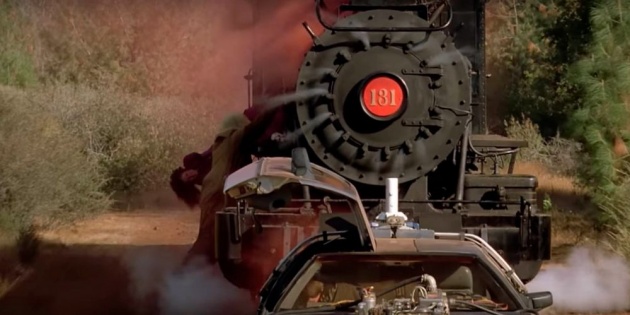 The Train is their Last choice that can run the fastest among other choices at that Time. As what a movie is all about, to give fun and enjoyment, So at the end, Marty and Doc successfully reached their Goal. However, Doc decided to stay to be with the woman he loves. 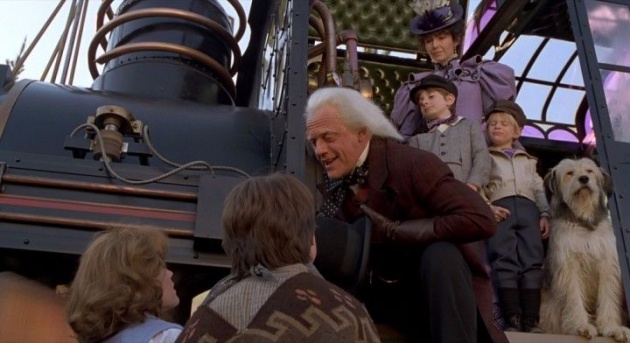 I love the fact how Doc made another Time Machine using a Train, He called it as Jules Verne Train (or simply the "Time Train", labeled "ELB" on each side after its creator, was the culmination of Emmett Brown's previous experience with building the DeLorean time machine and working with the steam locomotive that pushed it to 88 m.p.h. via backtothefuture.wikia.com)

No wonder how the scene runs so fast, Time Machine is such a rush!

At the end, The Machine was destroyed and Marty's Future is No longer predictable. The Only thing he learned is to be a better person in the Future for his Family and Future Family.

Marty McFly: Hey, Doc! Where you goin' now? Back to the future?

Doc: Nope. Already been there.

Video Source: Back to the future 3 the Making via youtube.com

Hope to have a great review for this blog hoho

Image Source: Back to the Future II Poster via comodockside.com Marty McFly: [arriving in 1955] Oh,…

Image Source: Back to the Future Poster via viewsfromthesofa.com Time traveling is just too dangero…