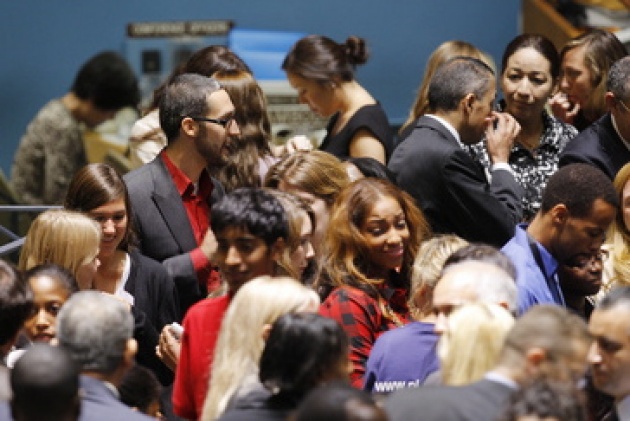 “We cannot ignore the facts. Many young people are sexually active, and because of this, they may face risks to their health, including sexual violence,” UNSG Ban Ki-moon offered speaking to the Commission on Population and Development, which opened a week-long session at United Nations Headquarters in New York. It may be a debate in US politics, but at the United Nations is pressing forward to promote and enable reproductive health for young men and women.

The Commission, composed of 47 elected Member States, meets annually to discuss population issues and trends in relation to development strategies and policies. The theme of this year’s meeting is ‘adolescents and youth.’ In his remarks to the Commission members and representatives of more than 500 non-governmental organizations, Mr. Ban emphasized that the international community must empower youth in this regard, as they are not only a growing demographic sector, but also a force for change and progress as evidenced by the various popular movements in the Middle East and other parts of the world over the past year. “This generation of youth is the largest in history. Even more important, this generation of youth is shaping history.” See Film for Blog –“Feeding 7 Billion!”

UNSG Ban Ki-moon focused his statement on combating HIV/AIDS among youth, lowering the rates of teenage pregnancies, and protecting children from early marriage. “Sixteen million adolescent girls become mothers every year, and every day, more than 2,000 young people contract HIV. We have a collective responsibility to drive these numbers down.”

The Cairo Programme of Action, adopted at the 1994 International Conference on Population and Development, according to the UNSG is still a relevant guide to ensure a better future for the world’s youth: “We must be guided by its wisdom and carry out its recommendations,” referring to an Action Program which articulated a new vision about the relationship between population, development and individual well-being. “An adolescent girl struggling in poverty requires different protection than a male college graduate. Our goal is to provide a safe, secure and healthy environment for all, regardless of their circumstances.”

UNSG Ban also submitted a new report to the Commission, produced by the UN Population Fund (UNFPA), which states that urgent action is needed to protect young people’s right to sexual and reproductive health. The report highlights the need to give millions of girls access to reproductive health services to avoid unintended pregnancies, unsafe abortions and sexually transmitted infections. Read our Blog for Film –“Access for All Women to Birth Control”-

“Many assume that all young people have access to information, that most are likely to stay in school, that they postpone entry into the labour force until they finish a degree of education and that they delay marriage and childbearing for when they are ready. However, this is not true for all adolescents and youth across the world. In fact, many of these issues are still a major challenge for the majority of young people in developing countries,” offered UNFPA’s Executive Director, Babatunde Osotimehin.

In addition to reproductive health care rights, Mr. Ban underlined, in his remarks, the need to give young people access to education, adequate nutrition and employment, and referred to the upcoming UN Sustainable Development Conference (Rio+20), in Brazil in June, as an opportunity for countries to renew their commitment to address issues relevant to young people. “Two months from now we face a test. The world will gather for the United Nations Conference on Sustainable Development in Rio. This is our one-in-a-generation chance to advance progress on the Millennium Development Goals (MDGs) for the sake of our planet and its people. Let us make sure that young people have their place across the international agenda.”

Being pregnant was what I thought would be the best part of our lives as married couple. My husband …

For many women, pregnancy and the arrival of a new baby is a joyous time but not for every woman. Re…