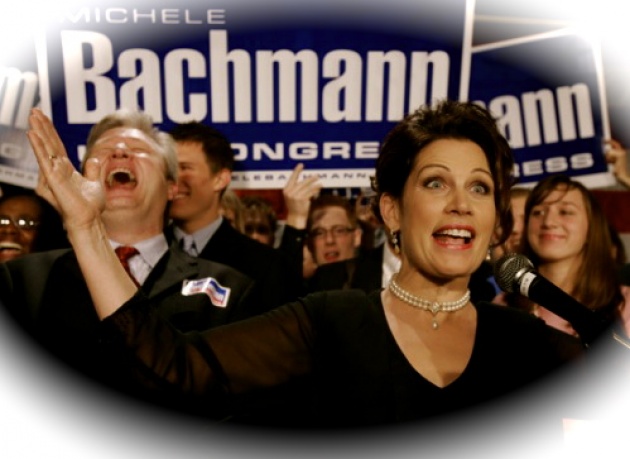 Spewing xenophobia and having established herself as Uncle Sam’s and God’s chosen to choose who is fit to be American and Christian - in her ideology/theology the two are one - Michelle Bachmann (Above) is striving to assume the role of America’s Marine LePen (below).  Bachmann is a challenge to America’s culture of tolerance and openness. However, she is also undermining the historical view of the Republican Party, from Abraham Lincoln to Theodore Roosevelt to John McCain.

Bachmann has pulled a trick out of the Joseph McCarthy era – she wants a woman adviser, Huma Abedin, of Islamic birth to be questioned regarding her extended family’s presumed links to Egypt’s Muslim Brotherhood, who she has defined as a  “Muslim extremist” and “jihadist organization. Bachmann of Minnesota was joined by Republican Congress Representatives Louie Gohmert of Texas, Tom Rooney of Florida, Trent Franks of Arizona, and Lynn Westmoreland of Georgia in sending formal requests for investigation of Abedin but also others, apparently without any evidence of misconduct or disloyalty but only based upon identity of birth/name. 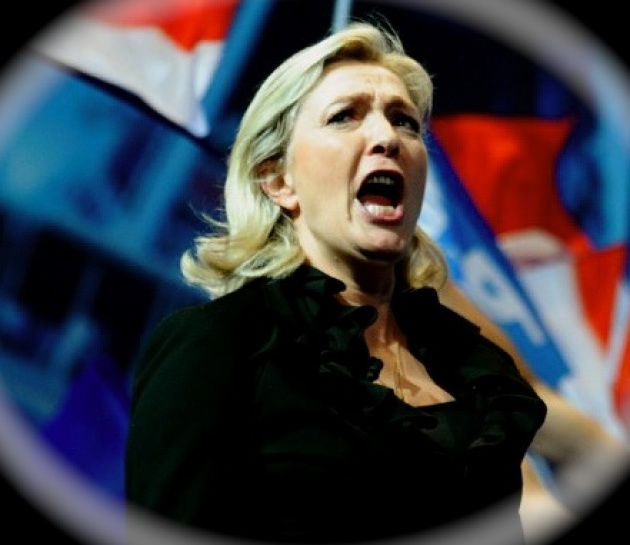 The inquisition directed at Ms. Abedin, who is married to former Congressman Anthony Weiner, (an American Jew -Photo Below with Huma) though is only the latest salvo of hate and xenophobia that has finally caught our broader media attention. The same group has directed a letter: “It appears that there has been deep penetration in the halls of our United States government by the Muslim Brotherhood. It appears that there are individuals who are associated with the Muslim Brotherhood who have positions, very sensitive positions, in our Department of Justice, our Department of Homeland Security, potentially even in the National Intelligence Agency.” 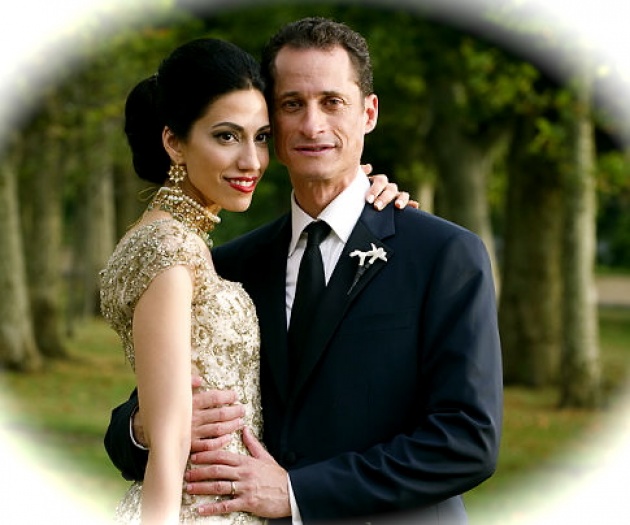 House Speaker John Boehner has been one who has decided to draw a line on Bachmann’s hate fest: “I don’t know Huma, but from everything that I do know of her, she has a sterling character.  Accusations like this being thrown around are pretty dangerous.”

John McCain (Below) has been blistering: “The letter alleges that three members of Huma’s family are ‘connected to Muslim Brotherhood operatives and/or organizations.’ Never mind that one of those individuals, Huma’s father, passed away two decades ago. The letter and the report offer not one instance of an action, a decision, or a public position that Huma has taken while at the State Department that would lend credence to the charge that she is promoting anti-American activities within our government.  Nor does either document offer any evidence of a direct impact that Huma may have had on one of the U.S. policies with which the authors of the letter and the producers of the report find fault.  These sinister accusations rest solely on a few unspecified and unsubstantiated associations of members of Huma’s family, none of which have been shown to harm or threaten the United States in any way.  These attacks on Huma have no logic, no basis, and no merit. And they need to stop now.” 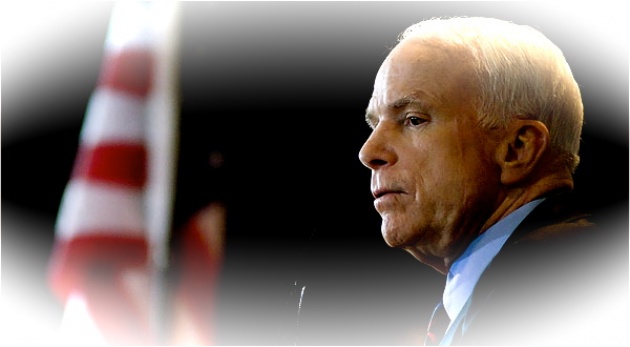 Bachmann’s Former Campaign Manager: “As a Devoted Christian, You Need to ask Forgiveness”

Ed Rollins, a long-time Republican insider and actually director of Bachmann’s recent Presidential campaign, added to the voices of reason and concern as to where the Republican Part, and by extension, the United States may be heading: "When anyone, not least a member of Congress, launches specious and degrading attacks against fellow Americans on the basis of nothing more than fear of who they are and ignorance of what they stand for, it defames the spirit of our nation, and we all grow poorer because of it. I have been a practitioner of tough politics for many decades. There is little that amazes me and even less that shocks me. I have to say that Congresswoman Michele Bachmann's outrageous and false charges against a top aide to Secretary of State Hillary Clinton, Huma Abedin reaches that threshold. Her unsubstantiated charge against Abedin, a widely respected top aide to Secretary Hillary Clinton, accusing her of some sort of far-fetched connection to the Muslim brotherhood, is extreme and dishonest.

Rollins (Below) continues: “Having worked for Congressman Bachman's campaign for president, I am fully aware that she sometimes has difficulty with her facts, but this is downright vicious and reaches the late Senator Joe McCarthy level. Shame on you, Michele! You should stand on the floor of the House and apologize to Huma Abedin and to Secretary Clinton and to the millions of hard working, loyal, Muslim Americans for your wild and unsubstantiated charges. As a devoted Christian, you need to ask forgiveness for this grievous lack of judgment and reckless behavior.” 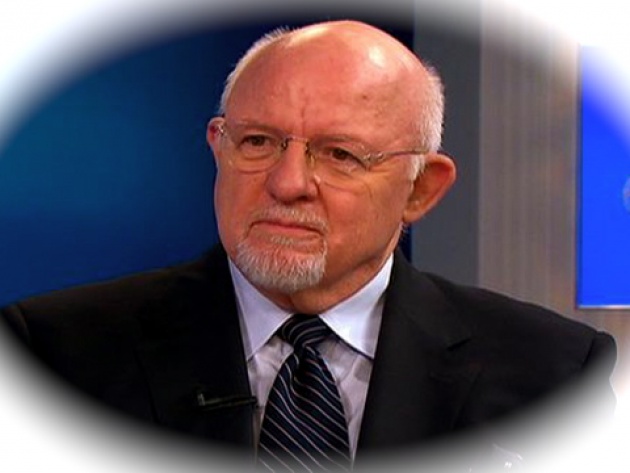 Bachmann is not by any means alone in her witch-hunt. She is sometimes the barking hound and other times following the pack. Gingrich and hate radio guru Rush Limbaugh echoed her bark. However, much of this reached new heights and received legitimacy from Presidential candidates as Rick Santorum and Herman Cain. Unfortunately Mitt Romney has opted to remain silent.

Just three years ago, Congresswoman Sue Myrick and three Republican colleagues called on the House of Representatives' Sergeant-at-Arms to investigate the presence of "Muslim extremists" working as Congressional staffers. Islamophobes have also targeted a number of Muslim Americans also working in then George W. Bush’s White House. At that time according to “Politico," anti-tax activist Grover Norquist came under assault just for his efforts to encourage conservatives to reach out to the Muslim community.

That is where the European fascist connection comes in: The ultra-nationalists of Europe’s rising far-right promote identity politics. Religion, ethnicity and identity of birth are the test rather than contributions to society, citizenship or even loyalty to free society. Geert Wilders was recently hosted in Colorado by the Western Conservative Conference and its affiliate the Center for Security Policy led by Frank Gaffney – the latter was already an apologist for genocide directed at Bosnian Muslims two decades earlier. Today, the Center for Security Policy is behind a new inquisition, or perhaps pogram. See our Blog for Film –“Alliance of Hate-Exposing the Haters Who Echo Each Other Across a Divide They Erect” 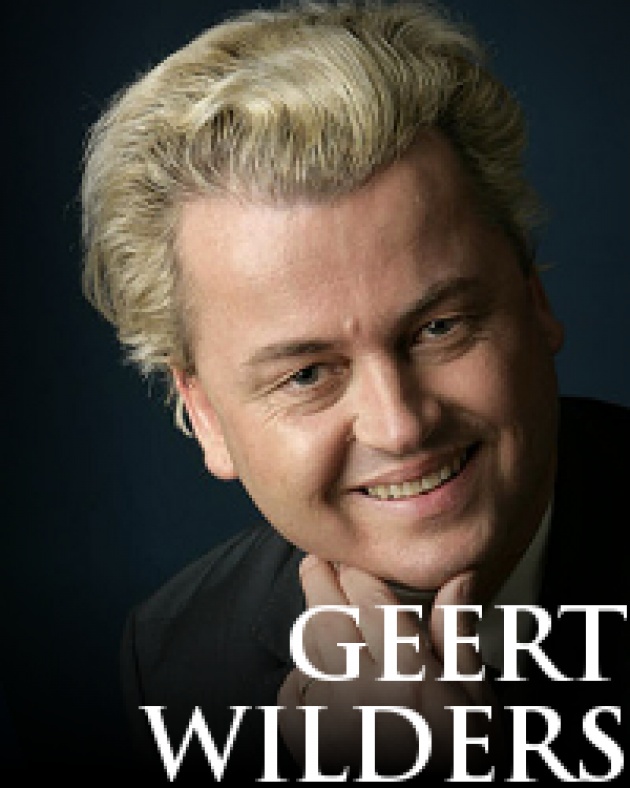 Is the US in danger of being overwhelmed by another era of Joseph McCarthy style inquisition? Perhaps we are already staring into the face of a new ethnic cleansing starting with America’s public/governmental institutions. Senator John McCain recognizes what is at stake though, and that it impacts America both as to how we see it from within and how others see the United States from the outside: "Ultimately, what is at stake in this matter is larger even than the reputation of one person. This is about who we are as a nation, and who we still aspire to be.” Can the Republican Party be salvaged? If one-half of our political system becomes consumed by the haters who give legitimacy to the politics of hate, then the US has become the new home of not those seeking freedom and opportunity but the haters who seek to redefine the very nature of America.